Windows 10 Will Be Featuring A Screen Recording Function

With every passing day, we get to know more about the abundant number of features that are going to be present in Microsoft’s highly anticipated operating system, Windows 10. Windows 10 is expected to be officially released on July 29, and users can pre-order flash drives of the platform as well. Coming to the feature at hand, Windows 10 will most likely be featuring more functions catered to the PC gamer, with one of them being Game DVR. 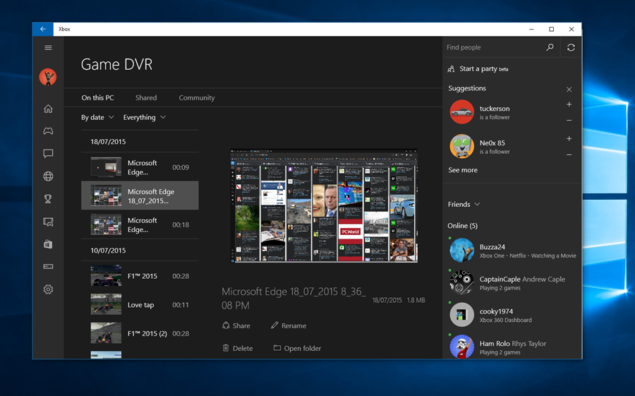 Game DVR Present In Windows 10 Will Not Only Allow You To Capture Images, But You Will Also Be Able To Record Videos

According to Techau, Game DVR will provide future Windows 10 users the ability to capture images as well as record videos. However, the only drawback of this function is that an application has to be used for this functionality to kick in. If you attempt to use Game DVR outside of the application (such as navigating through your desktop), you will be fresh out of luck.

In order to commence the screen capture or video recording function, it will be mandatory that you fire up an application and press ’Windows + G’. After you have executed this key combination, a toolbar will pop up in front of you, allowing you to either take a flurry of screenshots or start to record videos. While there are other alternatives around (better ones too), there is nothing like having a free software at your fingertips.

However, before you get all excited about this, there is a minimum hardware specification bar that your system will have to cross before you can start to screen capture and record videos. You will require the following GPUs, or iGPU, depending on your machine:

Additionally, video recording will be limited to 1080p, which is not bad seeing as how you’re getting a completely free application to use. The application should be present when Windows 10 goes on launch so stay tuned for more updates.