First Update Arrives for Windows 10 After Its Launch Last Week

Exactly one week after the launch of Windows 10, Microsoft has now started rolling out its first post-launch update for the desktop operating system. This update brings non-security changes and improvements to the OS to enhance its functionality and fix some bugs. 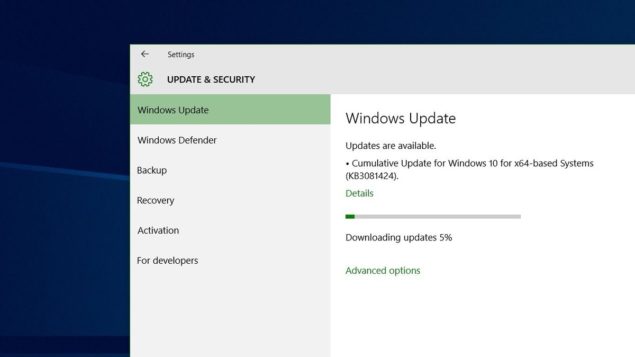 We had reported that Microsoft was expected to release first update for the operating system this week. Earlier rumors had claimed that the company will be naming its Windows 10 updates as "Service Releases" (SR1). However, Microsoft has termed this latest update rolled out for Windows 10 as a cumulative update containing all the previously released fixes. Don't worry, these cumulative updates will only install the new bits onto your PC, forgoing any previous fixes. While the details are few, Microsoft says this update includes "non–security-related changes to enhance the functionality of Windows 10 through new features and improvements."

Windows 10 cumulative update, KB3081424, comes at a download size of 325MB. This is only one of the first of many more updates and bug fixes to come for the operating system as Microsoft now offers Windows as a service. Microsoft has shared only a brief description of what this latest update contains, hinting at no specific details, whatsoever.

This update includes non-security-related changes to enhance the functionality of Windows 10 through new features and improvements.Windows 10 updates are cumulative. Therefore, this package contains all previously-released fixes (see KB 3074683). If you have installed previous updates, only the new fixes that are contained in this package will be downloaded and installed to your computer."

You can download the update now to have it fix any bugs and improve the overall user experience of the operating system. Don't forget to restart your desktop or laptop computer after downloading this update. You can expect to see these updates more regularly as Microsoft is moving to a service model and will be more proactively keeping the operating system up-to-date with security and feature updates. Let us know if you spotted anything different after downloading this update.