Windows 10 Redstone 4 is arguably the most controversial and confusing Windows 10 update we have seen so far. The upcoming version hasn't only suffered a fair share of problems and bugs, but it also appears Microsoft is unable to decide a name for this particular version.

Earlier in the year, it was revealed through internal documents that Microsoft was going to name Redstone 4 (the internal codename) as the Windows 10 Spring Creators Update. While the Redmond software maker never actually announced this name, this internal reference was enough for people to criticize how this will be a stupid decision since the original Creators Update was released in Spring and this one is more like the Spring Creators Update - II.

After Windows 10 Redstone 4 public release - that was expected on April 10 - was delayed, some reports suggested that the delay was due to the company considering a name change. As it turned out, it was a blocking bug that has managed to cause uncertainty around the release.

This was followed by a report last week that indicated that Microsoft is considering to name Windows 10 Redstone 4 as Windows 10 April 2018 Update, which let's face it, is much better than the Spring Creators Update. Now it appears (via WindowsLatest) the company is considering to remove 2018 from that moniker and just call it the "April Update." 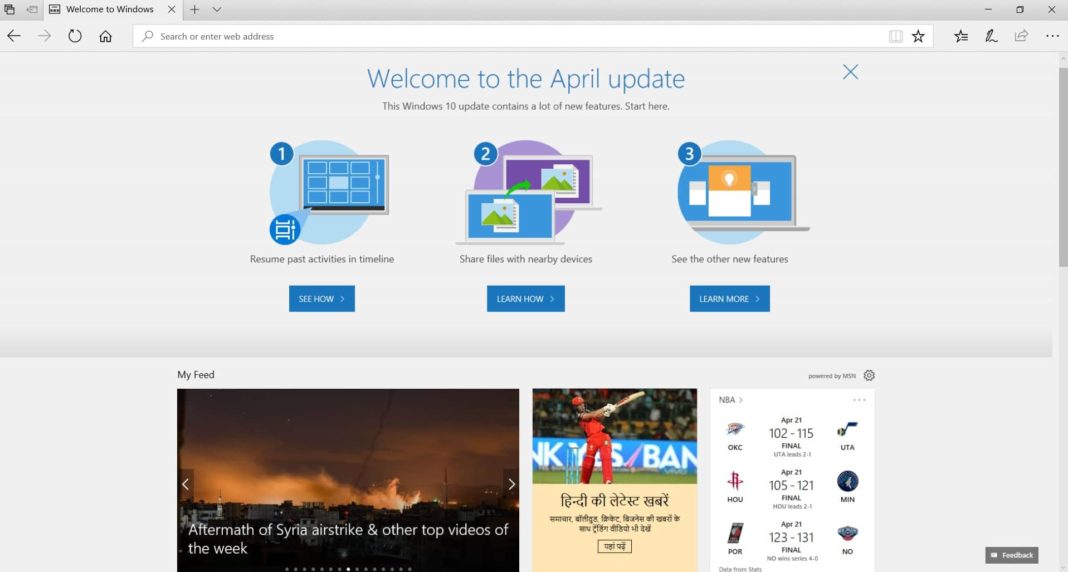 This reference comes directly from Microsoft as the company has modified the welcome page for Microsoft Edge, which read "Welcome to the April update" for quite a few hours. This welcome note - which has now been reverted back - also highlighted key Windows 10 1803 features, including Timeline and Near Share.

Microsoft has had to send two RTM candidates since the original one would have resulted in Blue Screen of Death (BSODs). Windows 10 Redstone 4 Preview Build 17134 was released last week and has since been promoted to the Slow and the Release Preview ring. While that made us excited about a Friday release, if there are no more bugs in this build, Microsoft should send out Windows 10 Redstone 4 to the public by the end of this week, if not earlier.

Neither the name nor the date has been announced by Microsoft officially. But, considering the Microsoft Edge welcome page, many believe "April Update" may end up being the final name. It's anyone's guess what will the Windows maker call the next year's April update.