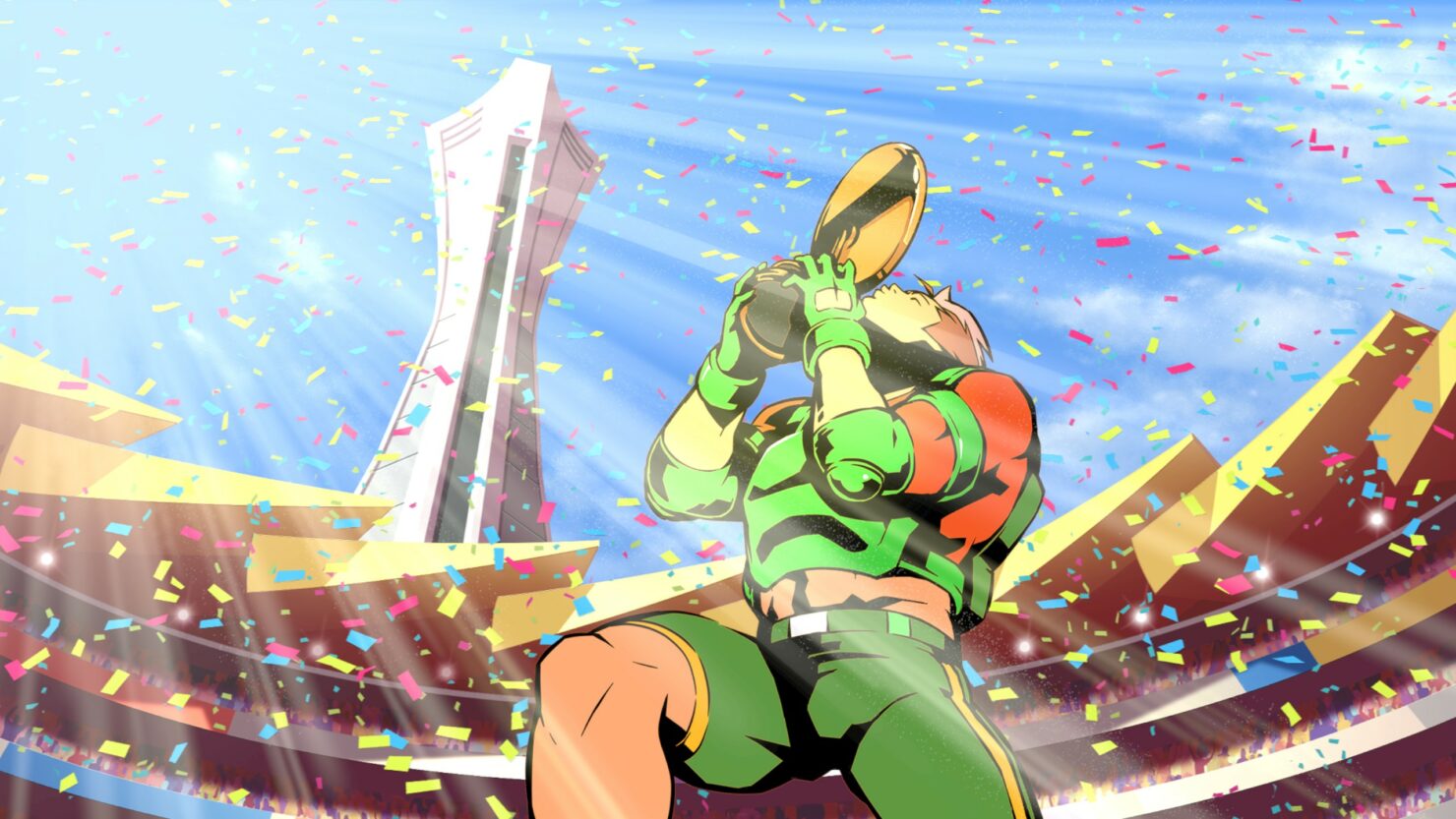 On its surface, Windjammers 2 is a very simple game. However, the techniques and hidden secrets that this game offers can be extreme game-changers. In this article, we'll briefly cover some of the best tips and tricks you can find as a beginner that can help you even later in your disc throwing career. Make sure to read them to stay on top of your game! 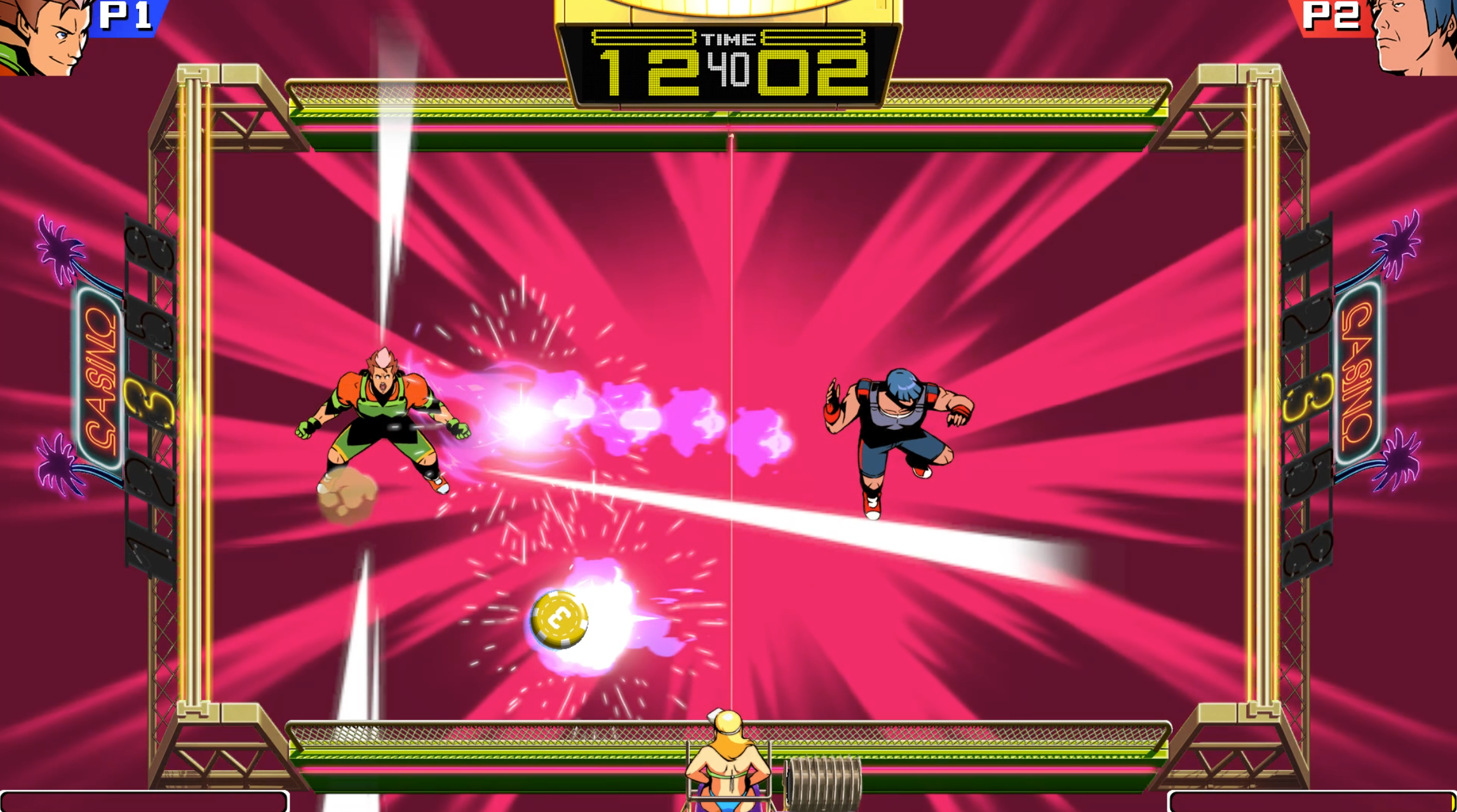 Tip 1) Learn to Use Your Supers Properly

The biggest part of Windjammers 2 is the usage of meter to perform super moves or save the disc after missing a catch. Your meter fills up as the match goes on, while getting scored on will give you a boost to it. When you have the disc in your hand, you will be able to perform a Super Custom Move with A+B. Each character's Super is different, and it will send the disc in various trajectories.

However, you'll quickly realize that Super Custom Moves can be quite predictable and easy to catch. Thus, you'll end up finding yourself using the second super move you have at your disposal, the Power Toss. At any point, while you're defending (and if the disc is nearby), you will be able to toss the disc into the air while being able to set up for pretty much whatever you like, be it a lob, a toss, Super Sonic Shoot, or even a weaker version of the Super Custom Move. 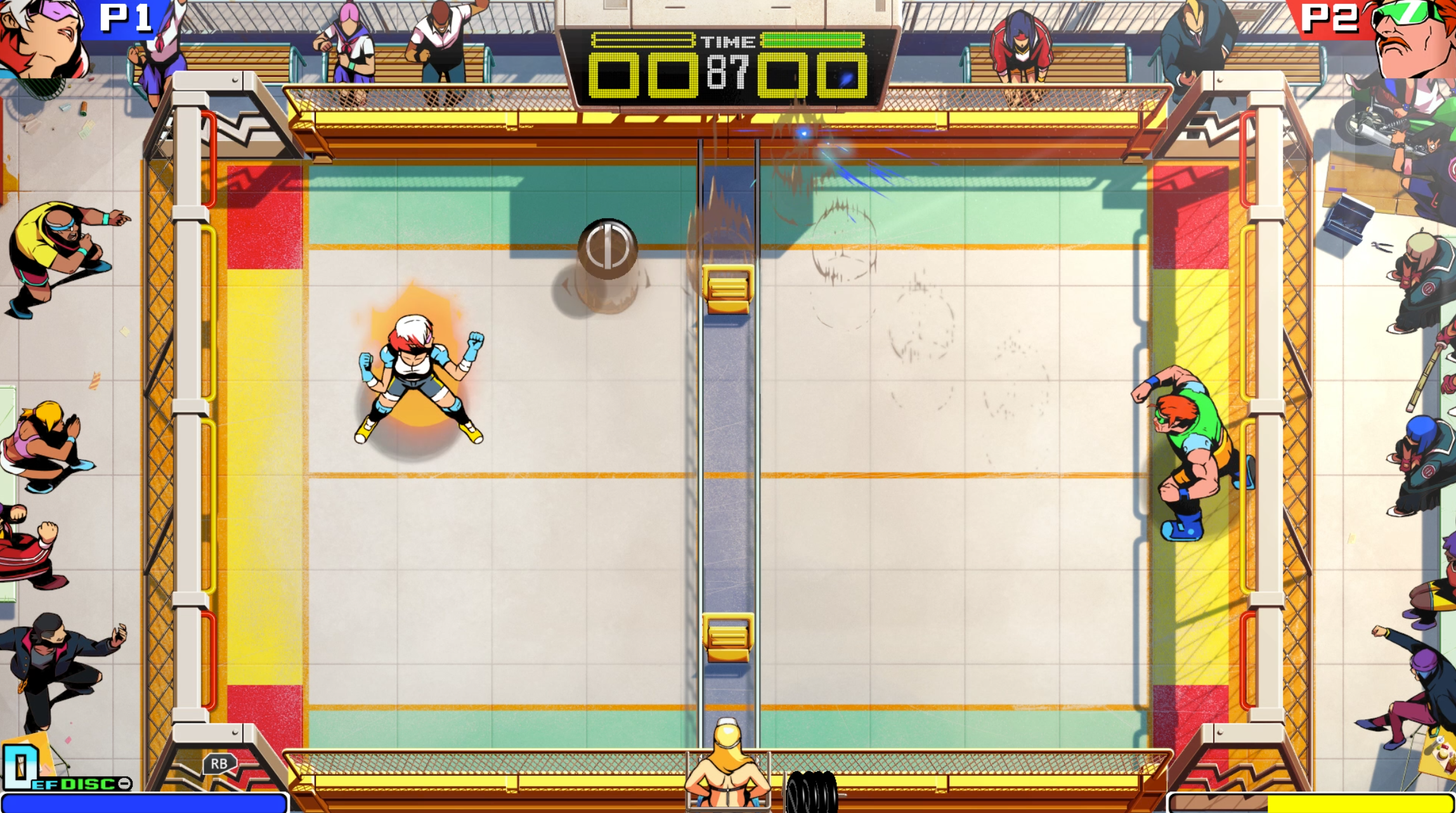 When playing Windjammers 2, you'll find yourself wondering what you can do to make sure your opponent gets appropriately mixed. Being able to toss the disc into the air (by pressing A when the disc is close to you) will allow you to place yourself under it to Charge up for a quick super move. From there, you can perform powerful variants of the shots you have at your disposal.

For example, after charging up, you have access to a Super Lob (Direction + B), a Super Spin Shot (Half Circle Up or Down + A), a Super Custom (A while on the ground after charged), and a Roll Smash (A/B/Y while in the air). Each of these moves can catch your opponent off-guard. However, Super Spin Shots tend to be the most unpredictable of the bunch.

The reason for this is because as the name implies, the shot will spin in circles depending on the direction of your half circle press. However, if it stumbles upon an obstacle like a wall, it will bounce again and again. Try performing a Super Spin Shot when you're close to a wall and watch as the disc hops its way to the opponent's net! 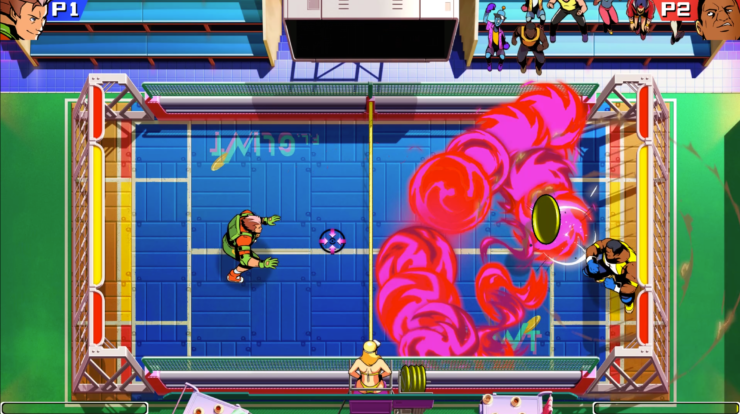 Tip 3) Bring The Game Back with Reversals!

A tricky technique in the world of Windjammers is the ability to perform Reversals. These allow your characters to essentially return an enemy super right back at them! Sure, they might know how to deal with your Super Custom Move, but will they be able to deal with their own? You can also use Reversals to perform other charged techniques without waiting for the meter to be charged.

However, this is a challenging technique as you have to perform any of the aforementioned moves just as you catch the disc. The opponent will be left with no choice but to attempt to predict your next move or to use a Power Toss if they miss. Thus, the game can very easily return to neutral. It's also worth noting that you can't do this right after performing a dash as some recovery lag happens. You need to be in the perfect position to catch the disc to perform a Reversal. 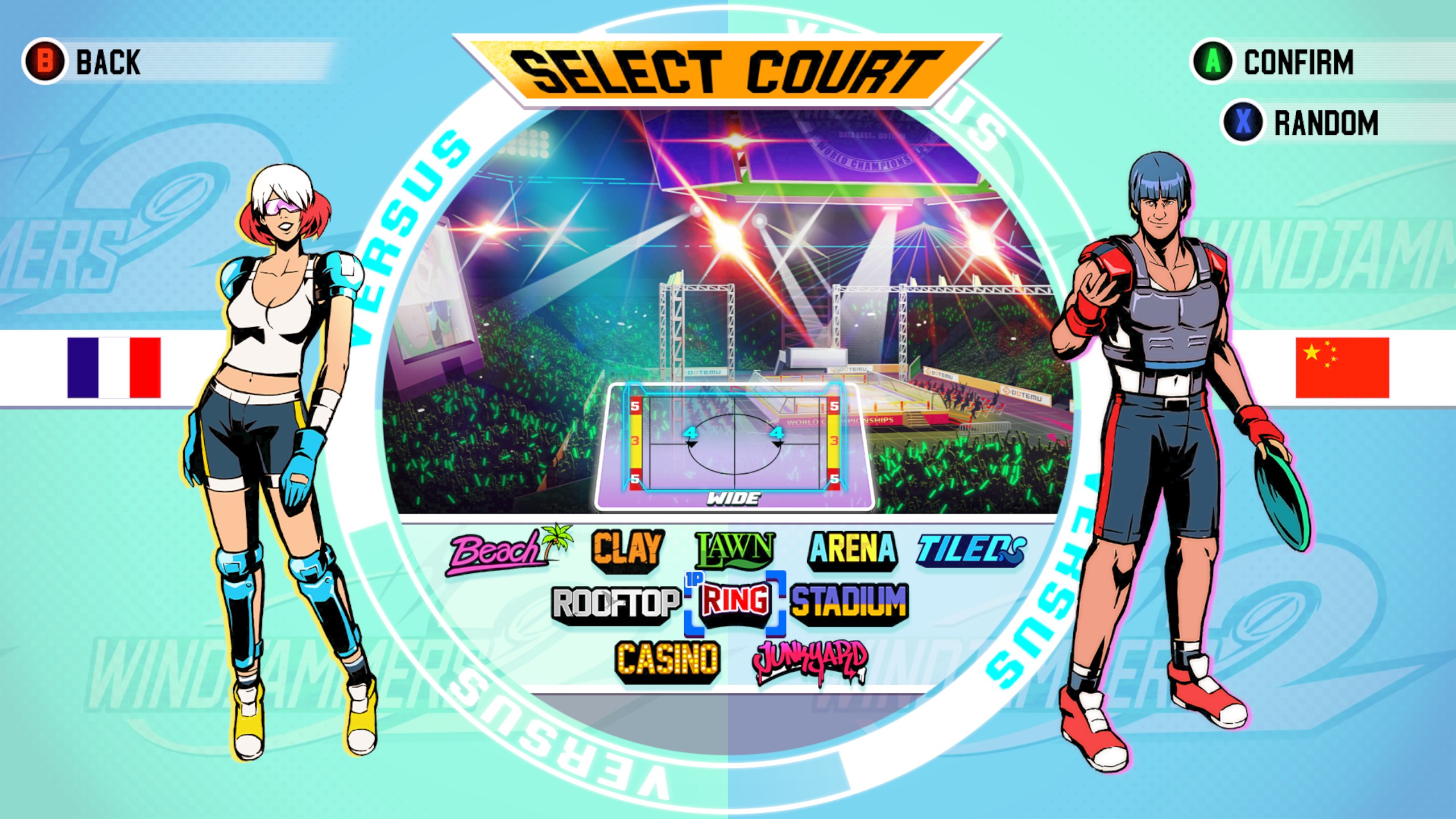 WindJammers 2 is home to several stages with varying rules! Stages can go from your standard affair with slightly different scoring zones to completely wild gimmicks such as the addition of mobile obstacles or, in the case of Casino, completely random scoring! Each stage can also vary in size, so heavier characters will have a harder time traversing bigger stages.

The scoring systems on each stage will also vary depending on the stage. For example, Arena's Red Goal (worth 5 points when scored) will increase the more the player scores on the opponent. So, if you scored on your opponent three times in a row, your Red Goal zone will be far larger than that of your opponent, opening up for a comeback! 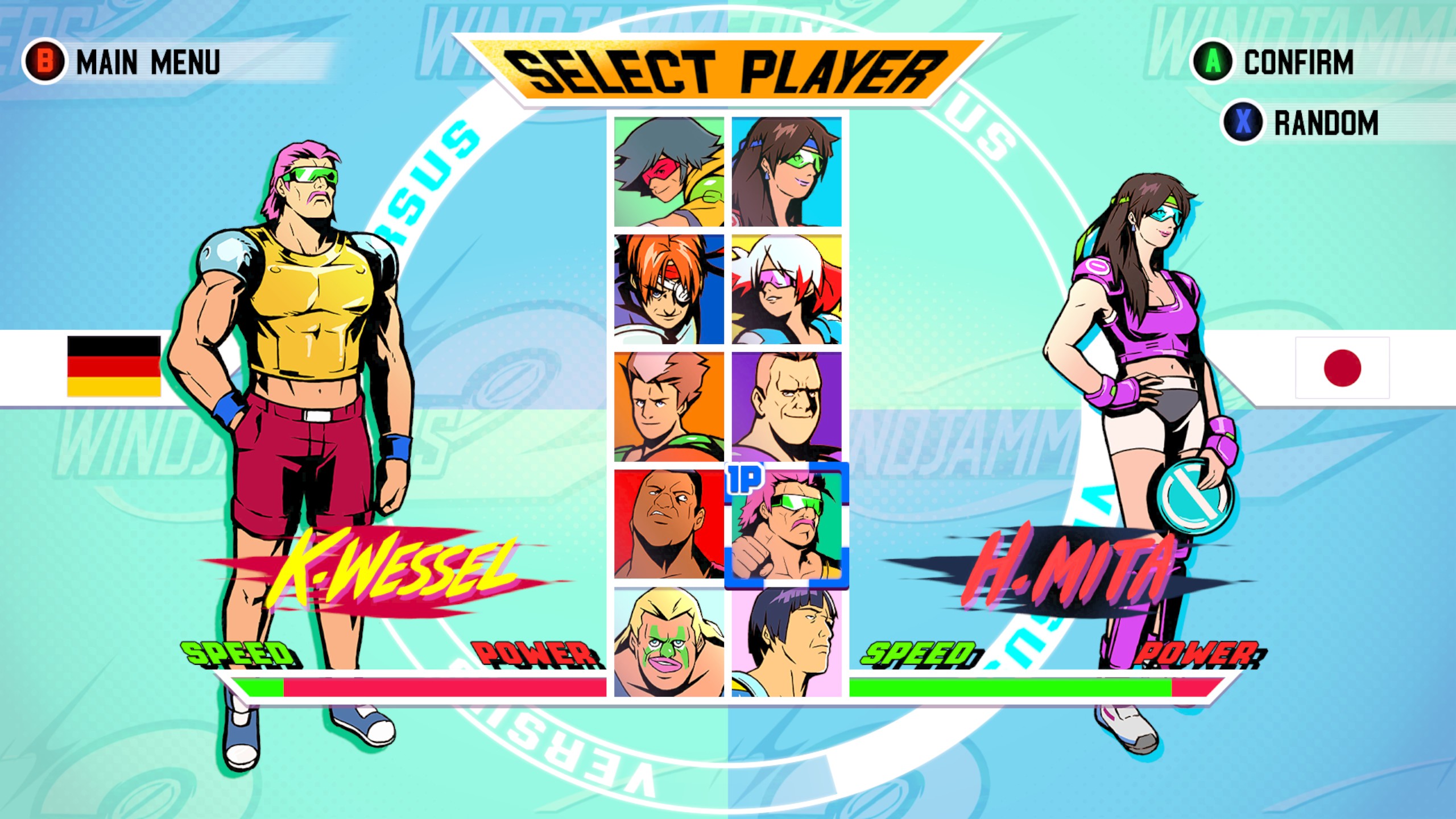 If you thought WindJammers 2 would give an instant advantage to lighter and speedier characters, think again. Heavier characters will, of course, give more powerful throws that can knock out your character for a short time if you don't catch them properly. Additionally, whether or not you'll be able to perform certain moves depends on your weight.

Sure, heavier characters will have a hard time getting from one part of the stage to another. However, they will also perform far stronger throws than speedier but lighter characters, who will get knocked back if they try to catch the disc. You might be in a perfect position and about to catch the disc, but the rule states that the disc needs to get inside the goal to score. There isn't anything in the rulebook that says anything against putting the disc inside the goal ALONGSIDE YOU.

If you are a weaker character than the power character, you'll be knocked back the moment you catch the disc. Depending on the difference in weight, this might mark the difference between you catching the disc and being carried as dead weight on the way to the goal. So, mind your positioning and weight while picking a character.

Let us know in the comments if these tips and tricks helped you on the field!