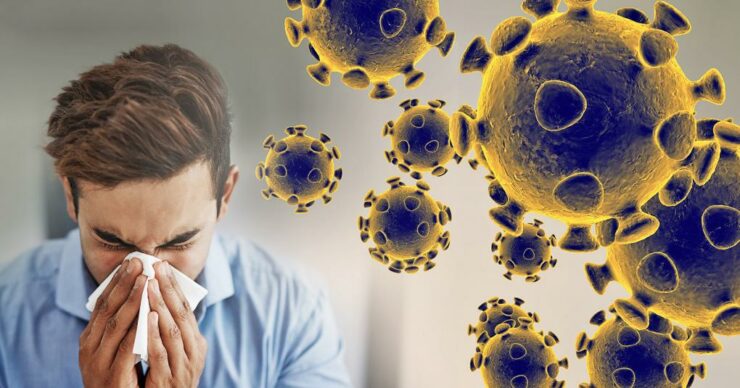 The World Health Organization (WHO) declared the Coronavirus outbreak a “public health emergency of international concern” on Thursday as it reconvened a meeting of the International Health Regulations Emergency Committee in Geneva. This designation unlocks additional funding and administrative measures aimed at curbing the spread of the coronavirus.

This comes as Chicago health officials reported the first case in the U.S. of human-to-human transmission of the deadly coronavirus. Moreover, containment efforts in China seem to have failed as the infection has now spread to each of China's 31 provinces.

The following infographic illustrates the spread of the virus in China over time: 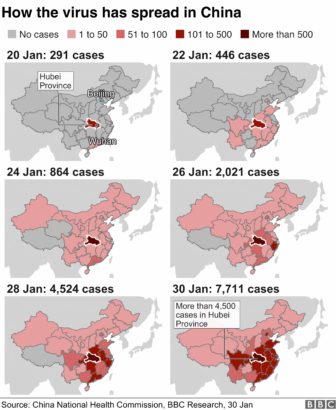 As a refresher, the coronavirus traces its origin to a family of viruses that cause illnesses ranging from the common cold to more severe diseases such as Middle East Respiratory Syndrome (MERS) and Severe Acute Respiratory Syndrome (SARS). These viruses are communicable between animals and people. A new strain of the coronavirus – currently named 2019-nCoV – was identified by Chinese authorities on the 7th of January. According to official source, the outbreak of this novel coronavirus traces its origins to a seafood wholesale market in the Chinese city of Wuhan.

The following infographic compares the human toll of the 2019-nCoV with that of the SARS outbreak in 2002 to 2003: 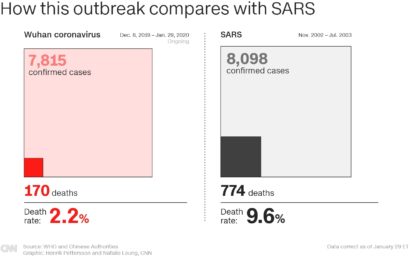 Also, the infographic below, sourced from CNN, details the current status of the coronavirus outbreak: 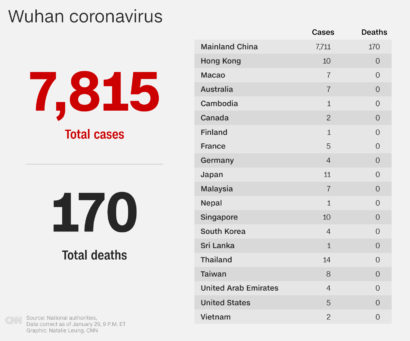 Please note that the situation remains fluid and these statistics keep changing on an hourly basis. For real-time tracking of the outbreak’s unfortunate human toll, head over to this website maintained by John Hopkins CSSE.

Economic fallout from the coronavirus outbreak

The financial costs of the viral outbreak keep mounting along with the unfortunate human toll. As an illustration, Ikea announced on Thursday that it was closing all of its stores in mainland China effective from January 30. Moreover, an increasing number of airlines are cancelling scheduled flights to and from the mainland China. These include British Airways, American Airlines (NASDAQ:AAL), Air Canada, KLM, Lufthansa United Airlines (NASDAQ:UAL) and Israel’s El Al Airlines.

On the tech front, Tesla’s (NASDAQ:TSLA) production of Model 3 vehicles at the Shanghai Gigafactory now faces delays due to officially-mandated closure of the facility. The company’s CFO Zachary Kirkhorn said during earnings call on Wednesday that:

"At this point, we're expecting a 1 to 1½ week delay in the ramp (up) of Shanghai-built Model 3 due to a government-required factory shutdown."

Similarly, Google (NASDAQ:GOOGL) announced on Wednesday that it was temporarily closing all of its offices in China – as well as those in Hong Kong and Taiwan – in light of the coronavirus outbreak and the attendant Chinese government’s extension of lunar new year holidays.

Bear in mind that China, as the world’s largest manufacturing and internet hub, maintains close ties with the global tech industry and the restrictions imposed by China and other countries in the aftermath of the coronavirus outbreak are imposing material costs on this sector.

Earlier in the week, we reported that China has ordered several manufacturing hubs and other centers of the industry to remain closed for the next one to two weeks. Suzhou, as one of those manufacturing hubs, has directed millions of workers not to return to work for at least one week. Notably, the industrial city located near Shanghai is home to some of the world's largest factories, including those of the Apple (NASDAQ:AAPL) contractor Foxconn (TPE:2354), Johnson & Johnson (NYSE:JNJ), and Samsung Electronics (KRX:005930). These closures have purportedly delayed the production plans for the iPhone SE 2, slated for a launch in March 2020.

Markets throughout the world have been on edge ever since WHO announced that it would reconvene a meeting in order to deliberate upon the severity of the ongoing coronavirus epidemic. That anxiety has now translated into a full-blown rout. As an illustration, the MSCI world equity index dropped 0.5 percent as European markets followed Asian indexes into the red. Additionally, the MSCI index of Asia-Pacific shares ex-Japan fell 2.1 percent to a seven-week low with the index having now dropped for six straight sessions.

The situation has given rise to concerns about China’s growth. For example, Citi has said that it expects China’s 2020 growth to slow to 5.5 percent, after previously predicting a growth of 5.8 percent, with the sharpest slowdown expected in the current quarter.