The quick settings bar in Android P gets a few enhancements. Some of the changes aren't exactly groundbreaking, but we're glad they're here and hope that we get more as the development of Android P continues.

Filtering out blue lights out of a display goes by many names some of which include, Night Light, Eye Comfort, Glare Reductron900, etc. Manufacturers and consumers are becoming aware of the negative consequences of staring at a screen day. Hence we see the push towards more devices getting the feature. 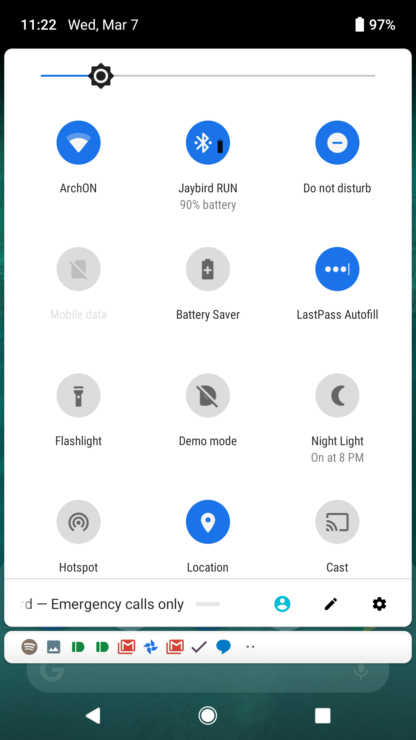 Android has had Night Light for a while now, which can be toggled manually via quick settings or automatically via settings. However, if you didn't know if or when Night Light was scheduled to turn on, you had to look inside Settings to find out. Not anymore, because in Android P you'll be able to see at a glance when Night Light is set to turn on or off just by looking at the Quick Settings pane. The change isn't game-changing, but we're glad its here.

Adaptive brightness is one of those features that often slip by unnoticed and has been a part of Android for a long time. It uses an ambient light sensor to measure the intensity of light in the environment and change the brightness of the screen accordingly, The quick settings brightness slider moves in tandem with the actual screen brightness to further demonstrate this. There is no change in the operation of the ambient light sensor, just the slider showing giving us a more real-time ideal of the changes that are happening in the background. If you have the Android P developer preview installed, you can test it out by covering the ambient light sensor with your finger and watch the slider drop down significantly. When you remove your finger, it'll shoot back up. The same is also visible in the display settings menu, where you can watch the percentage rise and fall. The change is purely cosmetic and looks pretty nice, to be honest.

Alarms can be enabled, disabled and edited from Quick Settings

The ability to control alarms from quick settings is one of the (many) new features Android P brings. The Alarm quick setting toggle exists in two states, off and on. When there is no alarm set, the state is set to off and tapping it does nothing. But tapping and holding the button brings up the screen to set up a new alarm. When there is an existing alarm, the state is set to on, and that's where you see the time it's supposed to ring. Tapping on it allows you to modify it and long tapping it still has the same effect.