At CES 2020 AMD delivered on their keynote as well as delivering quite a few new products and product detail. In those deliveries were the final specifications and pricing for their 64 Core render crushing Threadripper 3990X, their champion 1080p pushing RX 5600XT, and their new 3rd Generation Ryzen 4000 Series mobile Renior based processors. The last of those in the list ushered in a new level of mobile parts from the company delivering high performance but low power 7nm Zen 2 cores to the laptop market. They also introduced a new technology that AMD has been working on, SmartShift. But, it seems that SmartShift has either confused many or they're getting the wrong impression of what it does as I did when it was quickly covered on stage.

The AMD Ryzen 4000 Mobile processor, also known as 'Renoir' would have traditionally been referred to by many as an APU as it sports the CPU portion along with a discrete level graphics component on board, but this go around we're just referring to them as CPUs. The Renoir family makes improvements over the Picasso family by not only moving to 7nm but also utilizing the Zen 2 based cores and doubling the available core and thread count. Interestingly enough they have chosen to stick with Vega based GPU cores and reduce the largest available Compute Unit selection down to an 8CU model. What's really interesting for me is that they managed to design this chip without using the chiplet process they used with the 7nm based Zen 2 CPUs used in the desktop, so when these are hopefully ported over to the AM4 socket things could get interesting for the entry level enthusiasts out there. 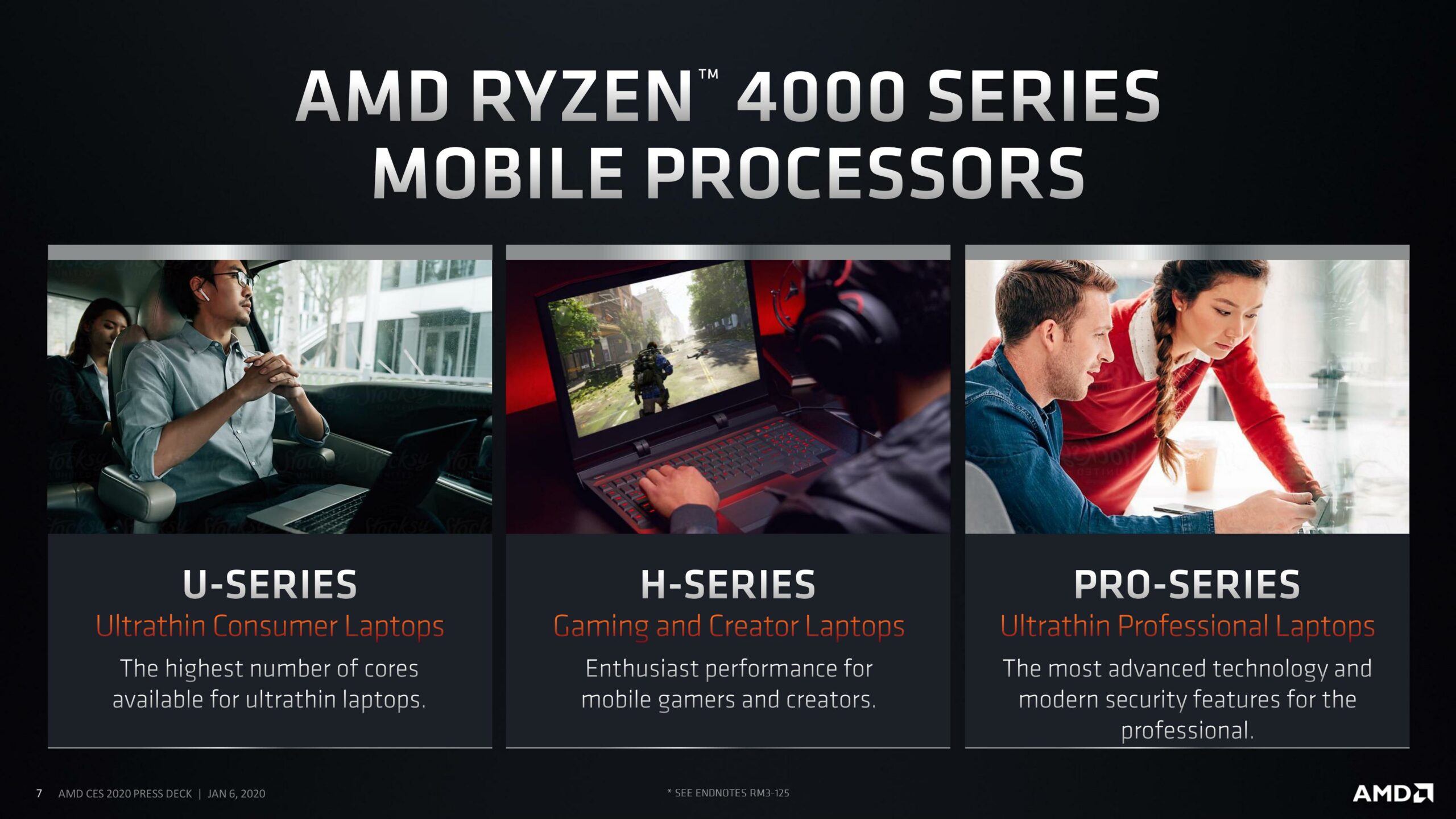 The big kicker here in the line is the fact that AMD will be delivering double the core and thread count available on this generation over the last, and doing so even at the 15w level. Their Ryzen 4000 U-Series will start as a modest 4 core and 4 thread level with the Ryzen 3 4300U with 5 Vega CUs and climb all the way to the Ryzen 7 4800U with 8 cores and 16 threads sporting at 1.8GHz base clock with a 4.2GHz boost clock along with 8 Vega CUs. Don't worry, this isn't just a low power part, there are higher performance H-Series as well. The 45w Ryzen 5 4600H packs 6 cores and 12 threads pushing a 3.0GHz base to 4.0GHz boost paired with 6 Vega CUs, the 45w Ryzen 7 4800H is bringing the 8 cores and 16 threads with a slightly reduced 2.9GHz base and a higher 4.2GHz boost with 7 Vega CUs.

First off, I want to clarify what SmartShift isn't and that is a form of Heterogeneous System Architecture or HSA. I've been following the APU scene since Llano was being introduced because the future is fusion after all, right? When the A10 7850K was being prepped we got to hear a lot about HSA and how that was going to finally marry the CPU and the GPU for sharing memory between each other as well as workloads, and while there are a ton of programs now that do benefit from shared workloads and GPU acceleration that is not what is going on here. 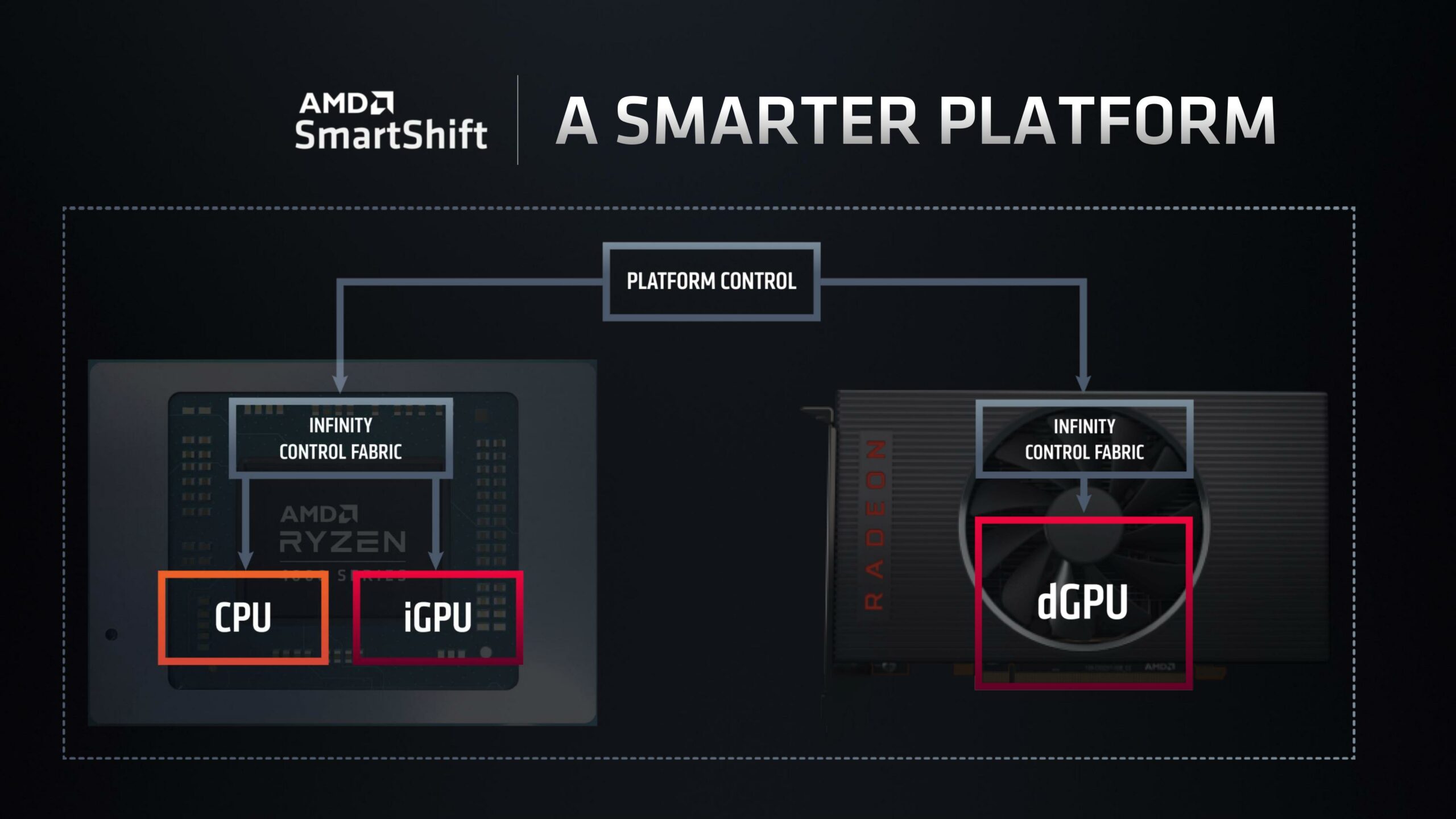 AMD SmartShift is actually something I got excited for once I got to sit down with AMD's Robert Hallock and discuss a bit more during CES. I had misunderstood it to be a way of one component helping the other, but in fact, it's more along the lines of one component getting out of the way of the other in mobile form factors.  The image above is very important for explaining what is going on in the process as the OS selection is a non-issue as this is a strictly hardware-based control measure and works on a silicon level.

The Platform Control is doing all the hard work here, but what is it doing? A very common way manufacturers cool laptop components is with a shared heat pipe arrangement and while that is effective in cooling one or the other things get dicey when both components are in full swing as their combined heat becomes a chore to deal with, but what if there was something controlling the level of intensity that either ran at? With and Intel and NVIDIA based solution both are wanting all the power they can get when they're active, sure they'll raise and lower based on load but when there is an AMD CPU and GPU sharing the same cooling solution and power source they can uniquely work together.

Back with the older APU setups, there was a bit of power balance between the CPU and GPU portion of the chip when once a GPU accelerated workload was active it would reduce the CPU to a much lower clock speed to reserve the absolute most power for the GPU, but that wasn't always the best way to handle it. Fast forward to Raven Ridge and Picasso CPUs and that problem was no longer here, sure there was still a little balance going on to stay within the socket power limit unless you were going ham on the overclocking.

But what if you could take that principle and apply it to a Ryzen 4000 Series CPU along with a dedicated RX 5000 Series GPU? Well, that's the idea. So what is happening is Platform Control (PC) is measuring workloads on the fly and based on what the exact moment workload is the PC is able to shift the power to the component that is in most need of it allowing for higher boosts. This can result in higher performance in the CPU portion for tasks that lean on it heavily and higher performance in the GPU side for tasks like gaming.

Basically, if you were playing a game and the CPU is sitting at 3.5GHz full bore at 35% utilization (just an example) and the GPU is hitting 100% utilization but not reaching full speed because of thermal/power constraints on the entire system it can dynamically pull back the CPU and increase the GPU available power resulting in overall increase in the experience and performance.

Something of note that came from an earlier interview and is discussed in the topic of PCIe Gen 4.0 AMD has made it clear that the iGPU and dGPU cannot operate at the same time, as when one is active the other is not and is completely turned off. 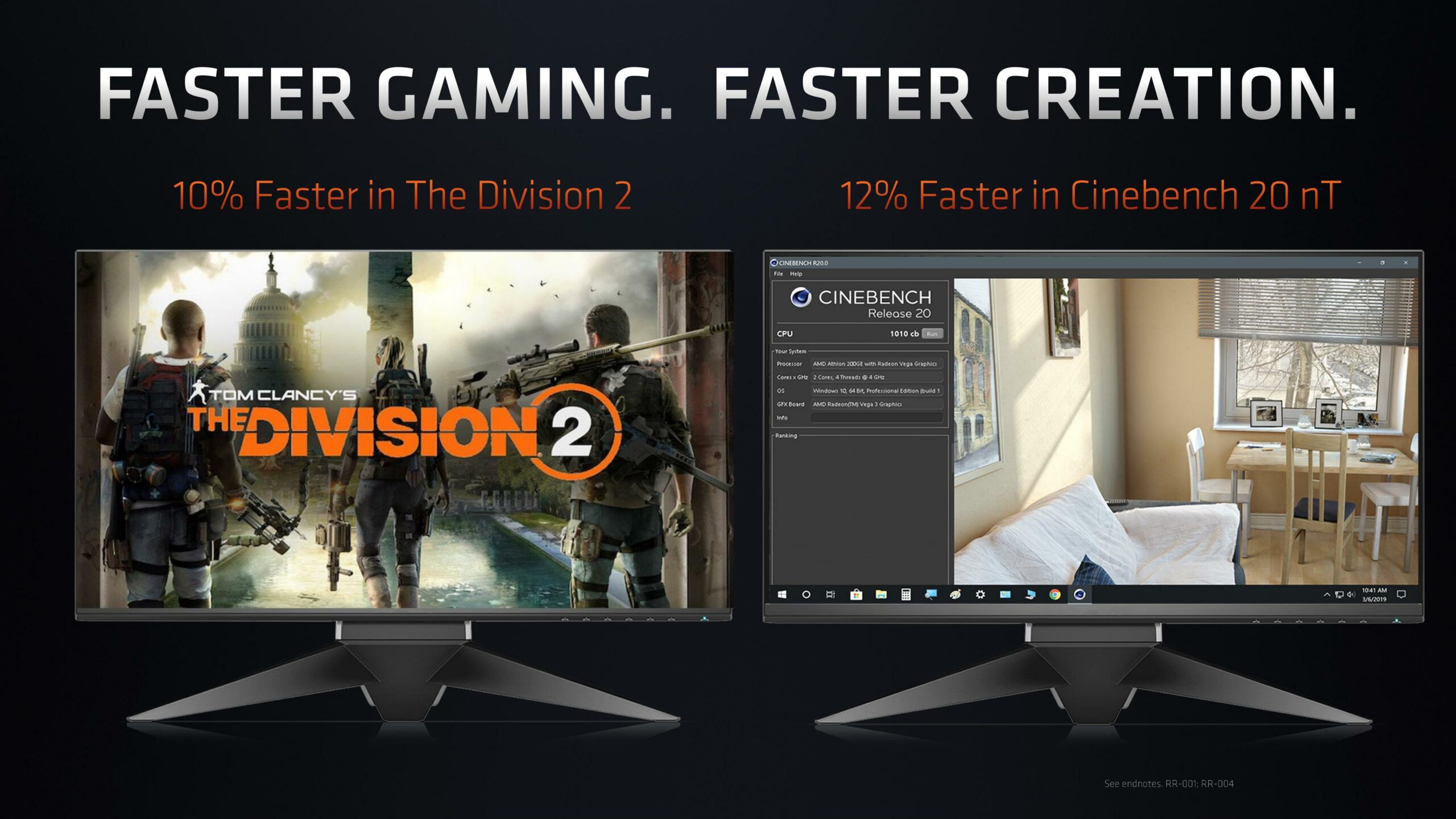 AMD has found that this can, in cases, increases the performance by as much a 10+% in applications where the balance is out of line already. This is a unique option that is given to exclusively all AMD based systems as it won't exist when paired with another dedicated GPU vendor, so if it has a Ryzen 7 4800H and an RTX 2060 then it isn't possible because of the way the components work together. I see this as being something AMD tries to leverage heavily in the coming months and further as it could give them a package edge.