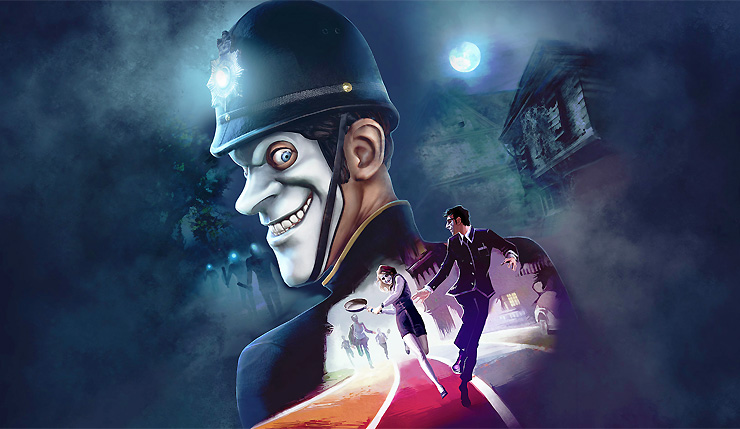 We Happy Few has walked a long and winding road to release. When the game was first revealed back in 2015, trailers made it look like a sort of psychedelic 60s BioShock, but the version of the game that hit Early Access in 2016 largely eschewed story in favor of an open-ended, procedural survival experience. Some felt like developer Compulsion Games had pulled a switcheroo. More confusion and frustration erupted in 2017 when Gearbox Software announced they’d be publishing the game as a full $60 retail title. What is We Happy Few exactly? A quirky narrative experience? A procedural survival game? A big triple-A action-adventure extravaganza?

I got to go hands-on with the full-release version of We Happy Few at E3 2018, which releases in August, and it cleared up a few of my questions. The story elements hinted at in those initial trailers have finally been added, but the randomization and survival mechanics were still there. I also tackled an area that felt like a more traditional handcrafted action-adventure stage. In other words, We Happy Few is basically all the things I mentioned above jumbled up into one. The good news is, it mostly works.

You begin the game in a bunker, where you solve a few simple puzzles and find some scraps of lore, before emerging into the above-ground world. It all felt very Fallout. From there you set off to explore the Garden District, a quaint, English village still strewn with rubble from the war. There are also a handful of other off-putting touches, like the creepy tea party mysteriously set up in the middle of a field. I’ll admit, I got somewhat lost at this point, but eventually found my way to a locked checkpoint guarded by a guy who wanted me to retrieve his war medals from some local hooligans.

The ruffians had set up a bit of a fortress, which felt less randomized that other parts of the game. After a bit of light stealth, I found myself locked in a makeshift gladiator area, where I was pit against somebody the game’s main character, Arthur Hastings, was acquainted with from his former life. The game gave me a choice of fighting my opponent with a lethal-looking pointy stick, or a nice padded club – I went with the bad-person choice and jabbed the poor chump to death. Thankfully, the stick came in handy afterward when I was attacked by pack of ladies with beehive hairdos and mod sunglasses.

I was eager to keep playing when my hour with We Happy Few came to an end. The game is still rough around the edges, but it has a bit of that Fallout or BioShock pull – I wanted to keep exploring, scrounging, learning more about the world. Will We Happy Few end up measuring up to those classic series? Will its procedural elements set it apart in a positive way? That remains to be seen, but I’m now relatively confident the full version of We Happy Few will be a groovy experience.

Following my hands-on time, I got to sit down with We Happy Few’s narrative director Alex Epstein and art director Whitney Clayton to discuss the game’s quirky premise, procedural generation, unique journey to release, and more… 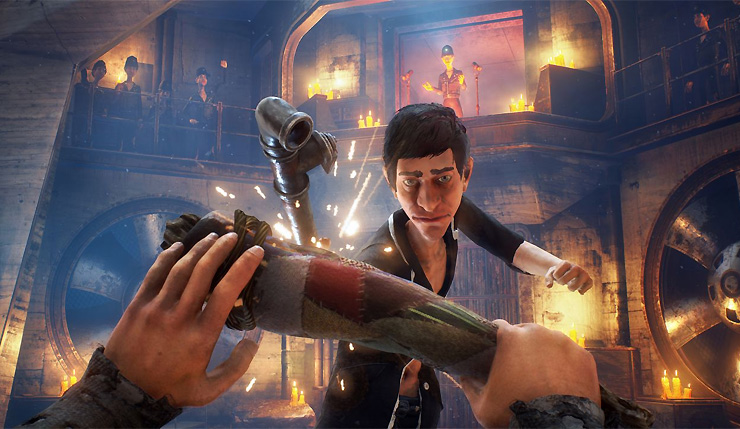 The focus at E3 is on We Happy Few’s story, so could you give us a bit of a primer to start? The game’s premise is certainly unique.

Alex Epstein: It's England, it's 1964, and they lost the war. They were invaded and occupied by the German Empire, and during the occupation they did a terrible thing they feel horribly guilty about. So, they did the only logical thing, which is to declare all the past Fake News, declare they've won a great victory, and take happy pills to forget. They're all wearing happy faces, so they're always smiling all the time. Our first playable character, Arthur Hastings, goes off his meds, becomes a rotten downer and so he has to get out. So, our game is about three slightly terrible people trying to escape.

Okay, got it. So, the British lost to the Nazis...

Epstein: No, no Nazis, the German Empire.

Oops, sorry, German Empire! So, actually, my mistake raises the question – are you afraid people might be confused by the historical stuff? Why opt for such a complex premise?

Epstein: We wanted to tell a story about the trauma these people had been through...if we were dealing with the Holocaust, I think that would have been too real, too big. It would have taken over the whole story. We didn't want to talk about a single historical event, we wanted to talk about, what is it like to have gone through a trauma, refuse to deal with it, and go into denial.

Whitney Clayton: It's very much an alternate history.

Epstein: Franklin D. Roosevelt was nearly assassinated in 1933, but, in our timeline, he was assassinated. So, the Americans became isolationist, they decided America first, so they didn't enter the war and so England was occupied. It’s an interesting “What if?” scenario.

Most of my hands-on time took place in sort of a post-apocalyptic country village – what other types of locations can we expect to play through?

Clayton: Our world is kind of split into two sections. We have the 60s regime, the area where the people who have been taking the drugs live, and it's sort of retro-futuristic bubbly 60s Britain.

Clayton: Right, everything is groovy, and they have all sorts of useless fun, silly, technology...

Epstein: Do you know the movie Blowup?

I’ve read about it, but haven’t had a chance to watch it.

Epstein: Yeah, it's about swinging London and this photographer and he's taking pictures of these fabulous models...

Clayton: It's what Austin Powers stole from. So, you have that facet of society, the sort of extreme groovy 60s England, and you have the neglected side, which they never quite fixed up since it was invaded. They've pushed all the people who react badly to the drugs, they push them in there. It's called the "Garden District," because it rains all the time and there's these beautiful flowers, but they're growing out of all this rubble and destroyed traditional English houses. So, it's very much a mix of historic England and retro-futuristic.

Epstein: Our biggest inspiration was England. We're big fans of the UK and all of its quirks.

Clayton: What we're doing sort of reflects what happened in the 60s, not just in England, but other places, where people went kind of nuts with design and wanted to forget history and push this sort of fantastical future idea. In our society, they really want to do that. 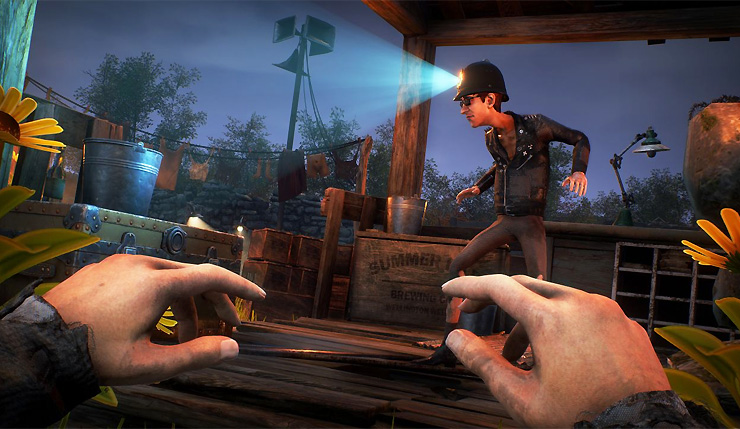 Interesting. There’re still a few people out there wanting to ignore history. Did you intentionally try to draw parallels between your alternate 60s setting and current-day issues?

Epstein: Not necessarily, but I do think our world is grounded in some sort of honesty and reality. I think the best science fiction takes the real and pushes it further, until it can make its point. But if there's no reality to begin with, it's not grounded and there's no emotional meaning. If it is grounded, it becomes clearer what you're trying to talk about.

Obviously you’ve put a lot of thought into creating this unique world and story, and I think that’s what grabbed folks when you first announced the game. But then you did the Early Access release that mostly focused on mechanics and gameplay. I think that threw off some people. Why take that path?

Clayton: We always had the backstory, but we didn't push it at that stage of the production...

Did you end up making a lot of changes based on the Early Access feedback?

But there still is a procedurally-generated element. So how are you combining that with the story?

Clayton: We started with the procedural part being most of the game, but now... So, how it works, is we have handcrafted areas made into tile sets and we layer them together. So, the streets and grass and rubble for the majority of the game, are systemic, with assets being placed randomly, streets being generated, but then we have interiors...

Clayton: Yeah, exactly. With buildings, we have fillers, which are facade buildings, but then we have the interactive buildings you can go in. Those are all handcrafted little levels basically. We also have a few larger areas that are all handcrafted, because it was important to have a really specific flow for the gameplay and narrative in those sections. So, it's a big mix.

Epstein: Wait, those aren't filler buildings! The people have just gone away on holiday!

And locked their doors very tightly, so nobody can open them.

Epstein: I'm sure they'll be back any day now.

How replayable will the game be? What if you want to focus on the mechanics, the survival aspects, but don’t want to play the story bits over and over?

Epstein: Well, we have emails from people, saying 'I've played this game for 600 hours,' and we're like, 'Wow, that's insane!'

Clayton: There's a lot of, like, sidequests you can do to get deeper into the lore. There's the main path, but there's also different paths. Then there's the straight-up survival crating thing you can do as well.

Epstein: There is going to be a sandbox mode, because we promised it in the Kickstarter. I don't know exactly what that will look like, because we haven't made it yet. 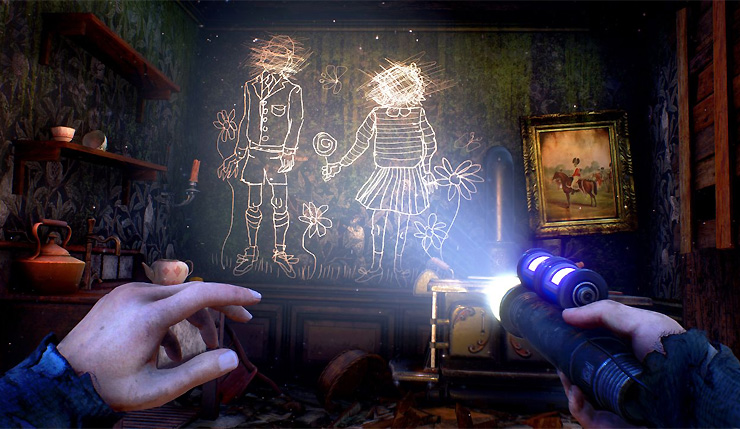 When I was playing, I was picking up a lot of notes and little bits of lore…

I always grab that stuff -- the files in Resident Evil  games and whatnot. Depending on the randomization, can I miss out on any backstory bits?

Epstein: The lore items, generally, are on the main path. But there will be sidequests that will spawn in some playthroughs, and not in others.

Will We Happy Few support the PS4 Pro and Xbox One X?

Epstein: Yes, with 4K resolution. You don't know what kind of headache that is.

What framerate are you targeting?

Epstein: The last push is optimization, so Whitney's artists have been working hard, tweaking LODs.

I'm just going to write down "quicklier" for framerate.

Don't worry, I will.

Epstein: If you buy the game on a disc in a box, consider that a coaster. Use that to put your coffee cup on.

Honestly, I could use more coasters, so that works out. Great talking to both of you!

The full-release version of We Happy Few launches on PC, Xbox One, and PS4 on August 10.