Due to the effects of COVID-19, developer Ubisoft Toronto has had to push back promised Watch Dogs: Legion content and features more than once, and well, they’re doing it again. Today, Ubisoft revealed a reshuffling of the Watch Dogs: Legion roadmap – the upcoming 4.5 update moves from May to early June, and certain features it was to contain, such as the new Invasion and Extraction PvP modes, are slipping all the way to August. Meanwhile, the big 5.0 update, which will introduce the anticipated Aiden-Pearce-starring Bloodline expansion, is moving from June to July.

Ah, but it’s not all delays and bad news! Watch Dogs: Legion’s June 4.5 update will now include a 60fps performance mode for Xbox Series X/S and PS5 (the game was locked to 30fps previously). Ubisoft is also adding limited crossplay for those within the same console family (so Xbox One can play with Xbox Series X and S and PS4 can play with PS5). Something called Resistance Mode has also been added to the roadmap without any further details – will be interesting to see what that’s about. Check out the new Legion roadmap below (click the image for full resolution). 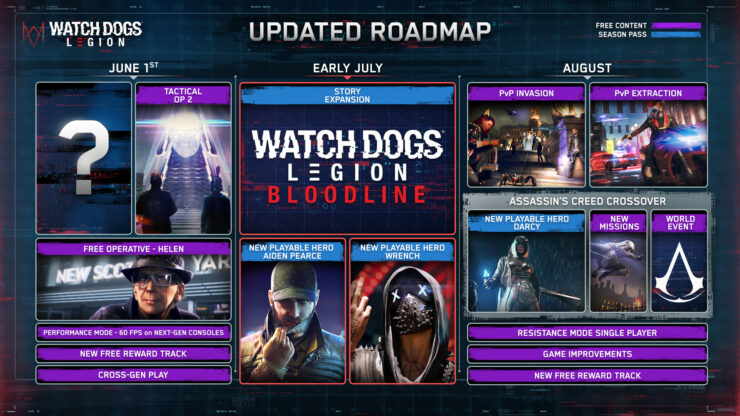 Haven’t check out Watch Dogs: Legion yet? Wccftech’s Rosh Kelly found it to be innovative, but somewhat uninspired from a story perspective, in his full review…