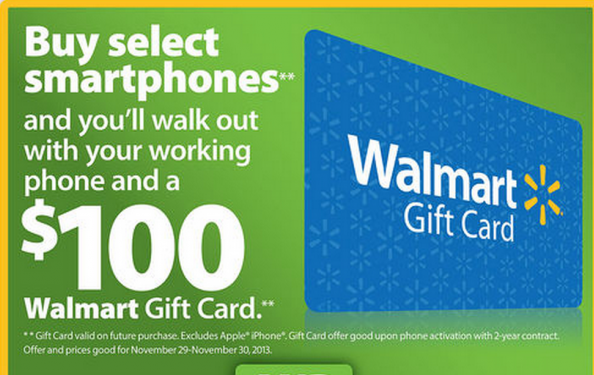 The Walmart Black Friday $100 gift card will be valid for future purchases and you will be needed to be eligible for a new contract outside and willing for a two years sign up.

While iPad Mini Retina will be guaranteed in stock for the first hour; these Walmart Black Friday smartphones will be available from Friday 8 AM till the supplies last.

One of the best Android smartphones, Samsung Galaxy S4 is available for $99 with a two-year contract. Which means it will be free with contract with the $100 gift card! You can get this deal on AT&T, Sprint and Verizon in many colors.

Another major smartphone being offered on Walmart this Black Friday is for Moto X. Moto X is on offer at $49 with a contract on AT&T, Sprint and Verizon networks. Since you get a $100 gift card, it is an extra earning of $50!

Samsung Galaxy S3 is up on 97 cents with a $100 gift card on Verizon. Although an year old, this device still is favorite for many!

Walmart also offers its users to trade an old device in for up to $300 towards a new smartphone. This will get you some extra cash. However, make sure to cross check trade-in values at NextWorth and Gazelle too.