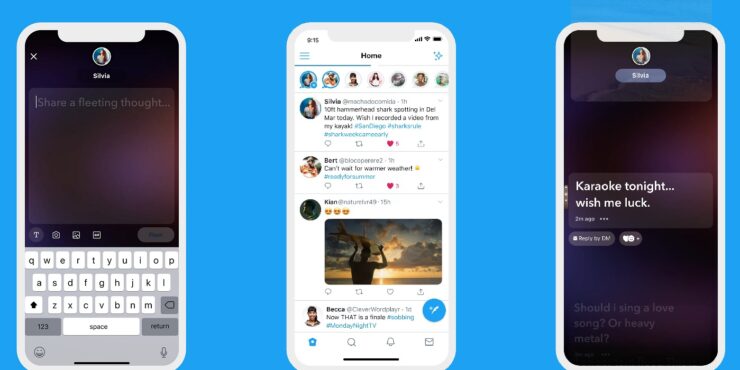 Twitter is finally looking to jump on the Stories bandwagon. According to the latest, the company is testing its new Stories feature - a new format called 'Fleets'. The new addition is only available to Twitter users in Brazil as of now and will be rolled out to users across the globe in the near future.

Users will have the option available to post photos, videos and GIFs as Fleets and the content will disappear after some time. As of now, the composer window for Fleets is not enriched and pretty barebones. For instance, there are no advanced editing tools or stickers. The company is allowing to post Fleets which are up to 2 minutes long. However, whitelisted publishers can post up to 10 minutes of content.

Twitter's execution of the Fleets feature is a bit different compared to what we are used to. On Instagram and Facebook, we have to tap on the right edge of the screen to view the next update. For Fleets, you will have to perform the swipe down operation to view the next update. Furthermore, you have to swipe left to move to the next person's Fleet. Take note that the feature is still in the testing phase and Twitter can alter the gestures as per feedback.

Fleets are a way to share fleeting thoughts. Unlike Tweets, Fleets disappear after 24 hours and don’t get Retweets, Likes, or public replies-- people can only react to your Fleets with DMs. Instead of showing up in people’s timelines, Fleets are viewed by tapping on your avatar. pic.twitter.com/sWwsExRLcJ

In order to access and view Fleets, you will have to visit the person's Twitter profile and then tap on the Fleets bubble situated at the top. Moreover, you will have the availability of viewing Twitter Fleets of people whom you are not following. Take note that the feature will not appear in search, moments and cannot be embedded on websites. Each Fleet will disappear after 24 hours of posting. As for how you can interact with them is simple, all responses will be through reactions and DMs.

It's good to see that Twitter is still working to add new features even though its a little late for the company to adopt Stories. Nonetheless, we're glad that it is coming. What are your thoughts on it? Let us know in the comments.