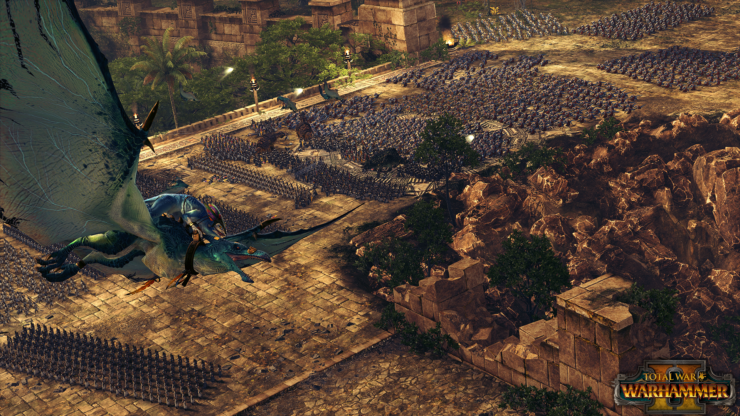 It is time to march on the Fallen Gates. The Elf servants have blasphemed not just by leaving Ulthuan, but by daring to interfere with the Cosmic Gates – an ancient device that can open a portal into the Realm of Chaos. For such a heinous transgressions, the Elves must be punished as decreed by Mazdamundi, the Lord of the Solar City.

Roaring out of the dense jungles of Lustria, these ancient, cold-blooded warriors are the servants of the Old Ones, enactors of the Great Plan and the true protectors of the world.
Along with the High Elves, Dark Elves, and one race yet to be announced, the Lizardmen are one of the four playable races in Total War: WARHAMMER II, and will be playable on the show floor at this year's E3 in the first hands-on build of the game.
Brought low in millennia past by the daemonic incursions of The Great Cataclysm, their grand civilisation now lies in ruin. But a handful of Slann Mage priests still live, and with them hope – that their people may rise anew. Tireless in their quest to restore order to the world, the Lizardmen field a glittering diversity of scaled warriors, from the humble, nimble Skink, to the titanic Carnasaur: apex-predator of the Lustrian jungles.

Announced last month, Total War: WARHAMMER II will launch later this year and combine with last year's excellent installment so that players may be able to enjoy a huge combined map with old and new regions/races.

We should know more about the game after next month's E3 2017. Stay tuned!