British developer The Creative Assembly is extremely busy these days. They're still adding content to Total War: Attila, they're working on Total War: Warhammer, Halo Wars 2 and even Total War: ARENA, which so far is the least discussed out of their upcoming titles. 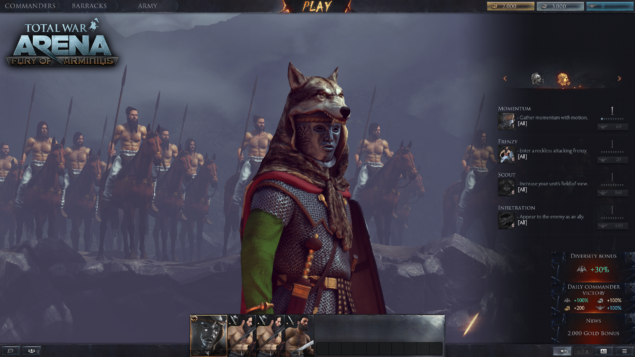 Still, the developer announced yesterday that the game is now in closed beta phase. The press release also mentioned massive changes with the update and included a brand new trailer that you can find below.

The ‘Fury of Arminius’ update, the biggest to date, introduces a new faction, new Commander and new map to the epic, team-based strategy game.

New Commander Arminius enters with a horde of fierce Barbarian units, bringing stealth, subterfuge and lightning hit-and-run tactics to the battlefield. See Arminius and the Barbarian units in action in this trailer.

The new map, Rubicon, is the first river crossing map in Total War: ARENA, offering quick access to enemy camps at the threat of being caught out in the open. Caesar’s crossing of the Rubicon River marked a pivotal point in ancient history, and this new map with its open terrain and treacherous crossing marks new tactical opportunities for all factions - Roman, Greek and Barbarian alike.

In addition the update includes rebalancing, improvements and fixes following the wealth of feedback received during the Closed Alpha stage. For the full update notes visit this address .

Total War: ARENA will be the first title in the series to have a Free-to-Play model and the first one entirely focused on online multiplayer, mixing MOBA elements with the usual real-time strategy. You can apply to get a chance to enter the beta here, though keep in mind that for now servers are only open in Europe and Russia, with US coming soon.