Irrespective of the fact that solid state drivers have opened up a new portal of read and write speeds that traditional mechanical hard drives will never be able to reach, Japanese tech company Toshiba aims to further increase those speeds with the release of its new SSD lineup. However, these SSDs have one particular feature that easily differs them from the rest of the storage products that utilize the SATA III interface. Let us take a look at what that is.

According to a source, Toshiba has unveiled its Q300 and Q300 Pro family of solid state drives that are based on both TLC and MLC NAND flash memory. Both of these storage products are going to be incorporated with the company’s own storage controllers, which will be responsible for delivering high sequential and random read and write speeds. However, one notable change that Toshiba has implemented to these drives is that they sport adaptive size SLC write cache technology. This particular technology will be used to dramatically speed up write performance of SSDs based on MLC and TLC NAND flash memory.

However, since these drives utilize the SATA III interface, (which has a maximum bandwidth of 6Gb/s), end users will not be able to get more than 530MB/s speed for sequential read and not more than 550 MB/s for sequential write, and that too if there are no other limitations that serve as a bottleneck for the aforementioned speeds. One of the reasons why Toshiba has introduced this tech is because it will reprograms part of NAND flash cells, which will ultimately make them behave like single-level cell memory. This will greatly improve performance as a result.

According to Maciek Brzeski, who is the Vice President of branded storage products at Toshiba America Information Systems, he states that: 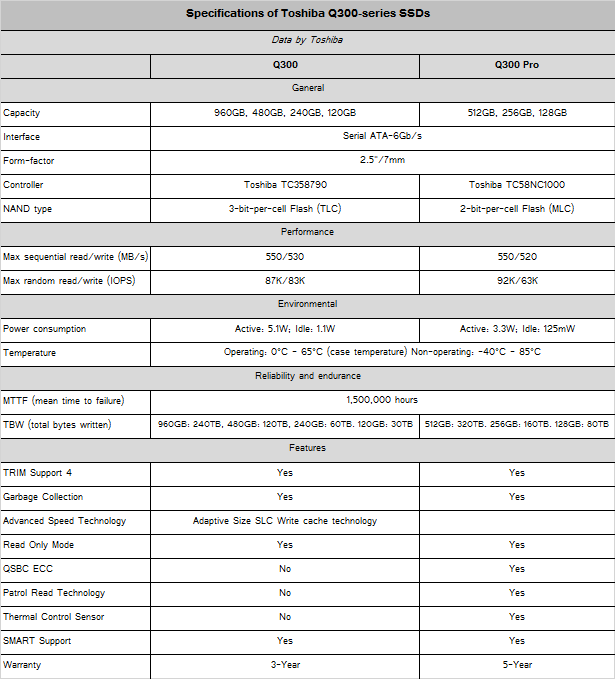 These SSDs are already available to purchase and will appear in the following storage capacities.