A few days ago Ubisoft announced that Tom Clancy's The Division is now planned for a Q1 release as well as that it will demonstrate the highly anticipated title at E3 2015 in June. The company also announced that a new studio was being added to the group of teams working on Tom Clancy's The Division. Ubisoft Annecy joined Massive, Reflections and Red Storm in a collaboration that could make The Division the game we wish it can be.

“All of us at Massive, Reflections, Red Storm Entertainment and Ubisoft Annecy want to ensure the game not only meets our high expectations but also those of our fans and players alike. We are proud of what we have achieved so far and can’t wait to show you more next month at E3!”

While delaying the game for a few  months into next year might ensure a more polished and smoother launch, it will also give Ubisoft's other major title, the just announced Assassin's Creed Syndicate, a stronger launch with more focus from the company.

Amazon has changed its listing of Tom Clancy's The Division to a release of February 28, 2016, with a ore-order option. 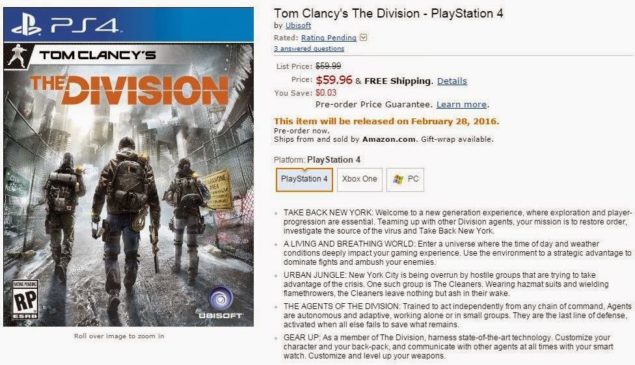 Ubisoft promises that more about The Division will be revealed at E3 2015 next month. Some new gameplay footage will be revealed and probably a release date, but if the late February date is real, that is some good news.