Every second of every day we are bombarded with various kinds of information and that is okay. The real question is that how does the brain make sense of all this information? What if the brain cannot actually 'capture' all the information being thrown at it? Then what happens? Researchers have come up with an illusionary trick (one optical illusion and one auditory) to trick the brain to ‘travel’ back in time to fill in the things it missed.

This phenomenon is referred to as postdiction where the stimulus can affect the way we think about we had heard or seen in the past. The Illusory Rabbit and the Invisible Rabbit illusions represent something similar.
According to Noelle Stiles from the California Institute of Technology (Caltech):

"How does the brain determine reality with information from multiple senses that is at times noisy and conflicting? The brain uses assumptions about the environment to solve this problem. When these assumptions happen to be wrong, illusions can occur as the brain tries to make the best sense of a confusing situation. We can use these illusions to unveil the underlying inferences that the brain makes."

Well, this video will help you understand this concept better.

How many flashes did you see? In the Illusory Rabbit, the mid flash actually never appeared. Most people think that the three beeps meant that there were three flashes.

In the Invisible Rabbit, the mid beep is often not heard and the brain then assumes that there was flash in the middle. The way how this mid beep and mid flash is being manipulated in the brain, shows postdiction at play. The last flash and beep cause the illusion and make the brain manipulate whatever happens in the past. 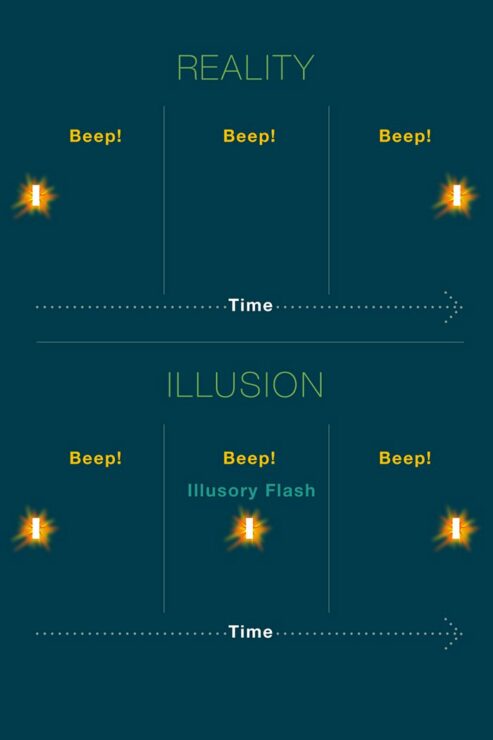 "The significance of this study is twofold," says senior researcher Shinsuke Shimojo from Caltech. "First, it generalises postdiction as a key process in perceptual processing for both a single sense and multiple senses.The second significance is that these illusions are among the very rare cases where sound affects vision, not vice versa, indicating dynamic aspects of neural processing that occur across space and time."

Scientists have yet to fully comprehend how the mind perception works. How the brain interprets and alters information and how this information is processed. Various mental health problems relate to problems with perception, hence the better we understand them the closer we will be to solving these problems. "Illusions are a really interesting window into the brain," says Stiles. "By investigating illusions, we can study the brain's decision-making process."

News Source: Scientists Have Created an Optical Illusion That Tricks Your Brain Into Time Travel