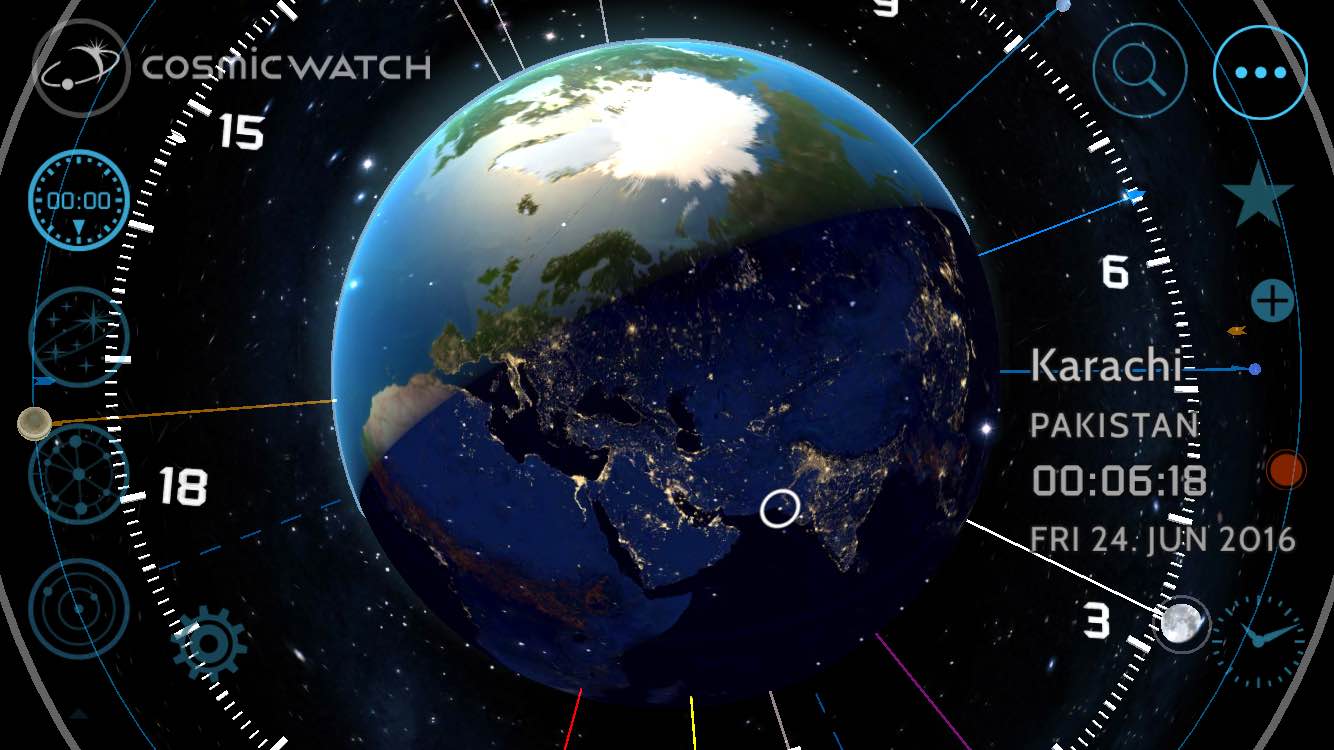 Do you miss looking at a clear sky with all those shiny little stars? Well, we could take a vacation and head out to some cleaner, unpolluted mountainous region, or being the couch potatoes that we are, we could feast our eyes on a virtual sky. Say hello to Cosmic Watch app, an app designed to bring you a little closer to the cosmos. I agree, it’s nowhere close to the real deal, but it does a pretty good job, and in fact, turns sky-gazing into an informative - and may I say, meditative - session.

With a vivid view of the cosmos, you can not only stare at the stars in real time, but also play around to see their positions a few hours earlier, or well, a few years later. Set the scene of a solar eclipse, enjoy bringing darkness to half of the world, or view a beautiful sunrise. In short, the universe truly becomes your playground as you forget everything happening around you, disappearing in a world where you can play the god. Not entirely true, but you do get a little high with all those beautiful scenes and imagery.

The app is designed to serve as an astronomical clock, with three modes: Timekeeping (my favorite!), Astronomy and Astrology. You can time travel using the first mode; view the constellations and planets with Astronomy, and astral charts with Astrology mode. There’s also a Solar System mode, where you can view the positions of the Sun, Earth, and other planets. Markus Humbel, co-founder of Cosmic Watch said that the app doesn’t need to connect to the internet to calculate celestial positions. The data on which app is based is from the "Astronomical Algorithms" by Jean Meeus and "the algorithms should be accurate enough for the next thousand years," Humbel told Wccftech.

While the primary aim of the app is to serve as a clock, the app does a brilliant job showing a real time sky, potentially helping you plan your photo sessions, or finding the perfect time for stargazing. I was particularly drawn to the beautiful textures that give this app such a glorious look. These textures are from NASA’s Earth Observatory and amplified by Eduardo Santana, creator of Cosmic Watch. "The Star maps were completely created by Eduardo Santana that's why some of the constellation names are interpreted and not the standard ones," Humbel said.

Cosmic Watch offers perfect meditative stargazing indulgence as you watch the celestial bodies move in real-time. The app does some serious justice to the beauty of our planet, and the entire solar system. The only way it could be further improved is by providing additional information, as it could easily be targeted to children with tutorials and informative guides, by perhaps tying the app to some wiki.

Just a few taps, and Cosmic Watch opens the entire universe before your eyes. Endless space and in there, you find that familiar tiny little blue and green speck. Tap on your dear little Planet Earth and enjoy as the cities light up in the night or the water becomes brightly blue during the day. Breathtakingly majestic? Definitely.

Do you have a favorite timekeeping app? Don't forget to let us know.