The Shortest Trip To Earth Preview – Cat on a Spaceship 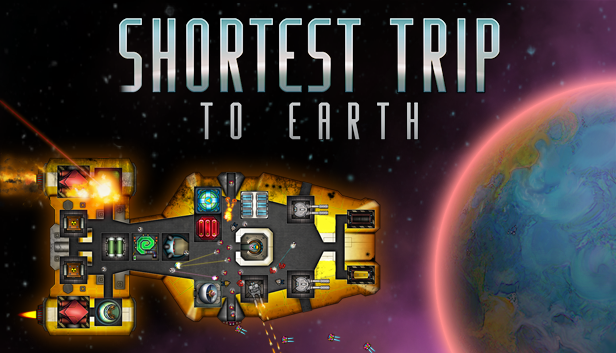 The one problem with being similar to another, popular, title is that you get accused of copying it. Sometimes there's little doubt that titles were used as inspiration, to be generous. Dark Souls certainly inspired a number of titles like Lords of the Fallen, The Surge, Titan Souls, DarkMaus and Death's Gambit to name a few. Shortest Trip to Earth will certainly be linked to FTL, though this is far from a bad thing.

Indeed, I've likely made clear what I think about Shortest Trip to Earth already. It did, after all, get chosen as the best indie game in our Best of Gamescom Awards. 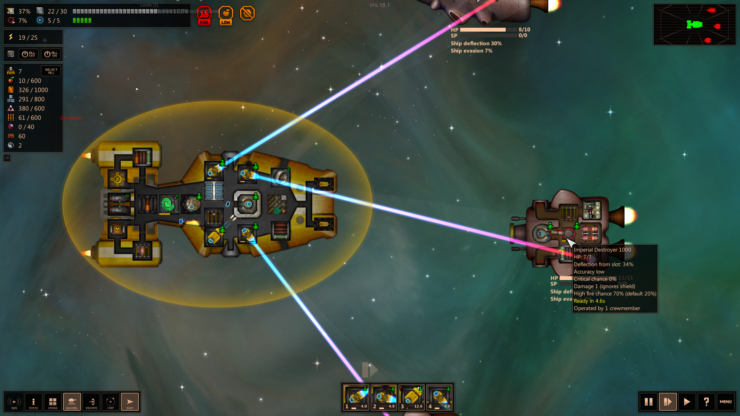 Team Lead, Edvin Aedma (writer of Teleglitch), was quick to tell me that his idea for The Shortest Trip to Earth began in 2010, two years prior to the launch of FTL. He even sent me email proof of this, not that it was needed. Why? Because there's nothing wrong with being inspired by something. Shortest Trip to Earth openly admits that FTL is an inspiration on the official site. Also, being inspired isn't an issue when you expand on or change, the formula at least a little bit, making it your own.

Interactive Fate are certainly managing to achieve this. What I saw was a hands-off look at the game, with good reason. There'd be way too much that I'd miss if I was given the reigns for the 30 minutes I'd booked in for during Gamescom. It certainly has a number of elements from FTL, that much is certain. Ship-to-ship combat as you venture through systems full of alien species. These same species you can steal from, or trade with, in a host of stories with varied outcomes based on your decision. All of this to gain resources that you'll desperately need on the shortest trip to Earth.

Did you know that's what the game was called? Well, that's because it's what you're doing, of course. Why? As you ventured out on the longest journey from Gaia you encountered an alien empire that decided the best way to start a peace treaty would be for you to sacrifice one of your own crew. Naturally, for you, that wasn't going to fly. You shot the emperor in the face and made a run for it. Now, you need to find the shortest... I think you get the picture.

Making this trip, you'll travel through ten procedurally generated systems, each of them featuring their own random species, elements and stories. You'll be tasked with balancing resources, crew needs, ship components and repairs. All of this and a considerable amount more, including a sort of moral choice system which will directly impact your current and next game. 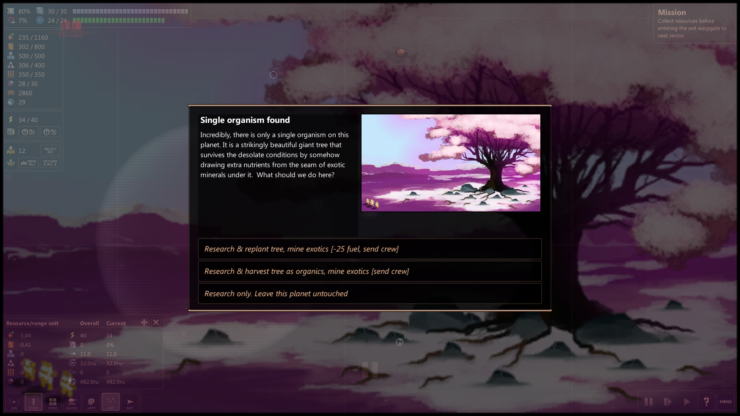 So what is this moral choice system? Well, they're called fate points. As you travel through the procedurally generated systems on your journey back to Earth, you'll encounter multiple worlds, asteroids, species and more. Much like FTL, these stories have their own rewards and punishments. The outcome is determined by your choices and actions, offering either short or long-term rewards. Long-term, in this situation, are the aforementioned fate points.

The game actively wants you to be good and the fate point system reflects this. These fate points, when obtained, carry over to the start of your next playthrough, allowing you to spend them on bonuses to make your next run easier. Will you trade off short-term gains for long-term, taking the 'good' path? Maybe you'll not bother with that, just trying to reach the end of each playthrough as a standalone run, not worrying about a later attempt.  Of course, this leads to a playoff between improving your current run and a good start for your next run.

More than offering you a way to improve the current or next playthrough, the stories are enjoyable in their own right. A number of them are plainly inspired by other sci-fi shows, films and games too. One, which I was shown, featured a lifeform that lives in space and looks like a whale. If that wasn't inspired by Star Trek: The Next Generation, then I don't know what else there is. There are also other lifeforms like Ctulufants, mushrooms that release spores that become humanoid in form, and even more. Oh, and there's a Cat.

All told, there are over 1000 unique illustrations that depict these stories. Each of them combining to make your own personal narrative as you journey through the universe. Expanding on that is the little details offered about your crew, the ones you bring aboard your ship as you're exploring, and their thoughts and dreams at any time. It's a quirky little feature, where hovering over a member of your crew will show what's on their mind at that point in time, as well as a bit of their backstory. 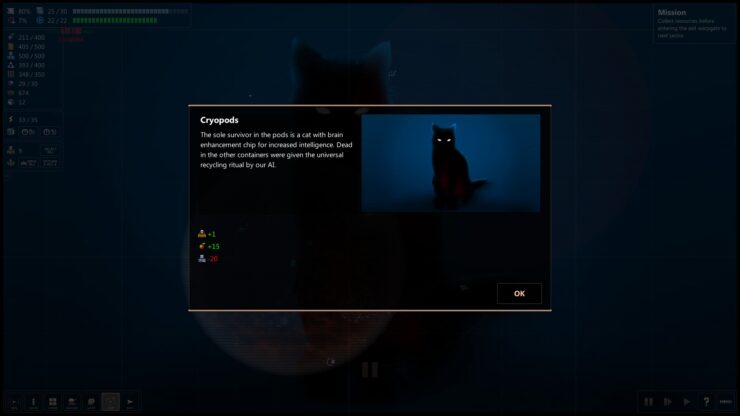 As for the gameplay, it's much like an expanded FTL. By all accounts, it may have expanded a little too far, becoming over complicated. For example, your ship is modular. So far, so standard. What isn't standard, however, is that repairing the interior of the ship and the hull is done separately. Also, depending on what components have been damaged in a fight, you may have to make more than a few stops at different stations, due to the fact that stations will be specialised, to get them back shipshape.

They will get damaged, as well. Everything will get damaged. Shortest Trip to Earth isn't going to be an easy game, nor will it have an easy mode like the one added to FTL. Combat is more complicated, particularly as you will be directing the firing arcs yourself. You can't target a specific area and leave the game to its devices, you're going to be hands on. Then you get boarded and that's even more brutal than fighting in space.

Each of your crew come equipped with their own weapons for any close quarters combat, the problem comes if the enemy is better armed. Then it's a protracted game of cat and mouse, only not using your actual cat. From what I saw, the enemy doesn't seem to want to target the cat, which is a good thing, because I like the cat. The cat was also smarter than the rest of my crew, running away and turning corners, getting out of the line of fire.

All of this while still balancing the needs of your ship and crew. These needs also more detailed, with interesting workarounds. Your crew naturally need food (organic materials) though some alien species may be sustained by another resource as food. If you don't have enough to feed them, you can always put them in cryosleep, reducing their drain on your supplies. Naturally, those in cryosleep aren't available to man areas of your ship, meaning you could be without the function of your shield generator, one of the gun turrets or something else.

It's a fine balancing act and easy mode may be a necessary addition later on - if only to make the game more accessible. 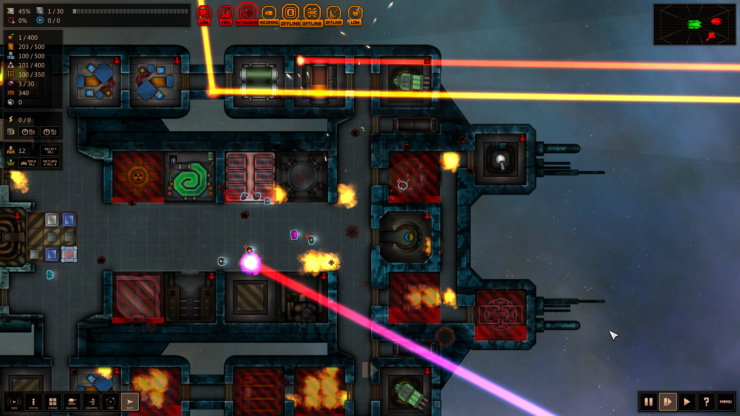 Shortest Trip to Earth certainly benefited from the fact that I love FTL. It was the main reason I checked it out, and I'm more than happy I did. It certainly seems considerably more complex than FTL. It also offers more detail in world building and the number of stories you can encounter. I can imagine that the complexity may end up being too much at some point, with so much information displayed at any time. Lightening the load, at least a little, could go a long way.

It will make for an interesting trade-off and well worth checking out when Shortest Trip to Earth launches on Steam Early Access later this year, with a full release sometime in 2019.