During AMD's CES 2020 Press Conference the company revealed the Radeon RX 5600 XT to the world. The RX 5600 XT boasted some fairly competent specs but downplayed enough to keep it far enough away from the existing RX 5700 Series so that it made sense in the market. It appeared to be well positioned with AMD showing wins over the GeForce GTX 1660 Ti so the asking price of $279 wasn't bad.

They announced the full specifications of the card, from Stream Processor count, core clocks, memory clocks, and TDP. Everything was shaping up nicely. After having it point out to them that the GTX 1660 SUPER offered a better value than the GTX 1660 Ti in the same market they even went back and updated with new slides showing how it compared to the SUPER variant. Later in the week, we got to see a new GeForce RTX 2060 KO model from EVGA that was set to be priced at $299 or less when it hit store shelves immediately following the event.  It wasn't long behind that when we got the announcement that the now one-year-old GeForce RTX 2060 was seeing an official drop to $299. 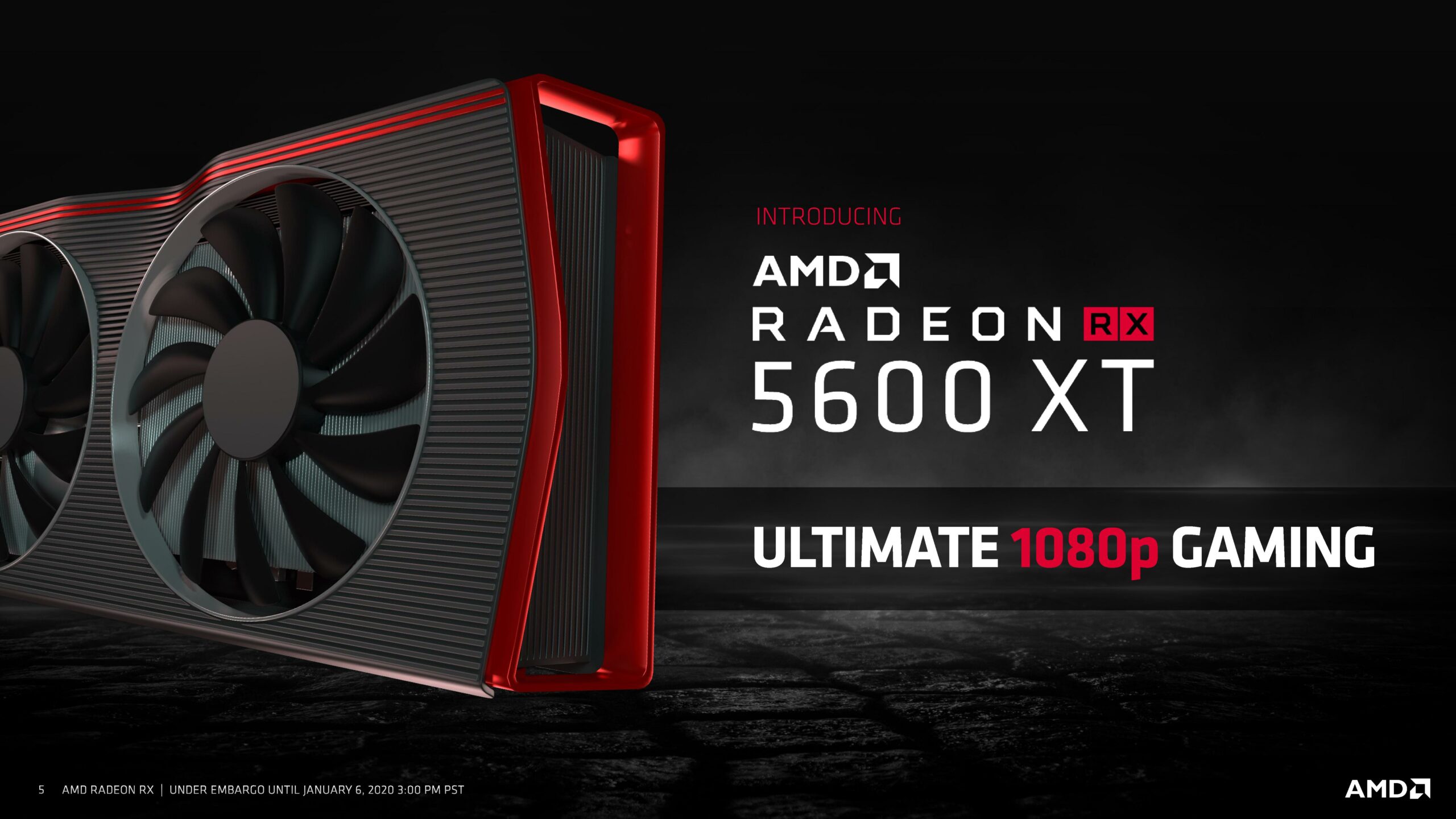 This put AMD in an interesting spot where we knew based on the preliminary numbers the RX 5600 XT should find itself close to the RTX 2060 but now was only finding itself within $20 of what it would ultimately compete with in regards to performance. Unlike the 5700 Series there is either not much room for price shifting or they simply refused to budge on margins, either are fine at that price point, but what AMD did do was go back to the drawing board with the clock speeds and power target.

Since AMD was not releasing a reference SKU of this card the decision to boost the clocks was a bit of an odd decision. Why? Because we knew these cards would be coming only from AIBs and they would more likely than not be overclocked already. But it seemed that AMD was working with board partners to boost the performance already according to the quote shared by ETEKNIX regarding the changes.

“Based on ongoing testing with our board partners, we have raised the GPU core and memory frequencies for overclocked Radeon RX 5600 XT SKUs to take advantage of increased thermal and electrical headroom built into partner’s custom designs. The updated VBIOS has been made available to our board partners for inclusion in select OC SKUs at launch. AMD is dedicated to disrupting the market with industry-leading compute products, and the new VBIOS makes the Radeon RX 5600 XT an even more powerful contender for high-performance 1080p gaming. Previously announced product specs are unchanged, as they remain AMD’s recommended reference design specs.”

This did not, however, change the basic specifications for the RX 5600 XT according to AMD's product page. But, I found the information under the RX 5600 Series page to be formatted quite a bit differently than how they've done in the past if you compare it to the RX 5700 Series page. This at least confirms that the original spec has gone unchanged. But AIB cards have seen quite the confusing launch.

As far as I'm aware not one reviewer's card they received had an updated BIOS and subsequently resulted in them having to rerun benchmarks again with a new BIOS to get results. The problem with that is most of the cards available now were likely in the channel and headed out to retail spaces at that time. So, at the last minute, they found this 'extra' performance? Those who were first in line to pick up the new Radeon RX 5600 XT were greeting with the original 'slower' BIOS so they'll be required to update, on their own, to the latest that reviewers used or be left with sub-review performance. Gamers Nexus did an excellent guide on how to do this is the safest way possible, I recommend you check out their article.

Our understanding is that cards available next calendar month should have the latest BIOS available as right now vendors are up against the wall with Chinese New Year staring us all in the face.

What Could Go Wrong

So flash and dash right? Hold on there, it's not quite that simple. Sure all the cards that reviewers, including ourselves, got sent out received bios updates, sometimes two, or even a third revision, but it's not quite that simple that everyone should just assume their cards is good to go. The problem comes down to a specification to which the board partners built, and that specification was the same as what was laid out during CES. These cards were built with a TDP and memory specification in mind. Sure there are higher tier cards that are overbuilt that would be okay to handle higher tolerances, but what about those entry-level boards at the $279 price point?

Despite the common perception, MSI has made it very clear that NOT all cards can do 14Gbps memory like many of the BIOS updates are pushing. These cards, even the better ones, were specced for 12Gbps so you're now down almost to the silicon lottery when it comes to the longevity and stability of the card. According to the video by MSI they claim that the memory may be 14Gbps but they were not validated for the speed, only the 12Gbps. But it is worth noting again that the initial specification did not change the memory speed. MSI even found that there were quite a significant amount of issues after testing with the faster memory on a large number of cards.

What makes the memory speed such an issue is that we are now seeing a mixture of cards that can be flash, and will later ship with, the faster memory mixed in with cards of the slower memory. The problem is with the lack of reviews, kudos to those who included preflash results, that showcase anything but the best-case scenario. If all future cards come with the faster memory, great, if not it's most certainly a buyer beware moment, as Brad Chacos of PC World so elegantly put it.

Thanks to a list compiled by Computer base we can get a snapshot of the market for RX 5600 XT models of which have a BIOS update available and which do not. According to the list, it appears that MSI is taking the safe approach with their Gaming and Mech models by not planning to allow for an update on those models. While Asus is still open the others on the list are allowing for an update to their cards. At this point, I would highly recommend going with a vendor whose warranty is best in your region. Another point of advice will be to find a review of the SPECIFIC card you're looking to purchase because there could be a 10% or better performance swing between RX 5600 XT models, and that's a big enough difference to be in a different performance class.

The price change that was made at the launch of the RX 5700 Series was a simple one to follow. The launch of the RX 5500 XT came and delivered just as expected. But, the launch of the RX 5600 XT was set up to be another solid launch for the red team but was marred by last-minute confusion on BIOS selection, changes, questions of who did what. What may have been an effort to confuse the competition has resulted in confusion for the customer and even some reviews to add disclaimers in regards to the BIOS. I don't think there's been this much confusion since the RX Vega post-launch pricing fiasco.