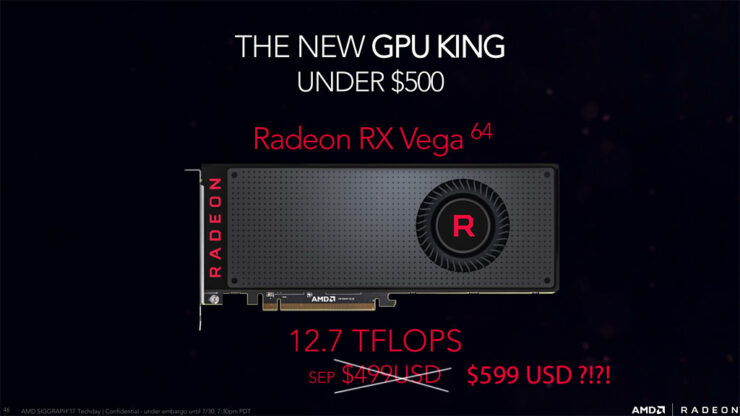 Was the cake a lie? No RX Vega 64 standalone garphics card is available for under $500.

Okay, so something huge just crawled out of Overclockers UK's forums. According to OC UK's Gibbo (via OC3D), AMD's launch MSRP of $399 and $499 for the RX Vega 56 and 64 respectively, were only "introductory offers" and an "early adopter" discount by the company. Considering the fact that no one was told of this fact beforehand and that all reviews went live assuming the stated 'introductory' MSRPs were permanent, this is incredibly upsetting news. We have reached out to AMD for comment and will update the article as soon as we get a reply.

AMD's RX Vega lineup of GPUs launched just a few hours ago and and every reviewer out there listed an MSRP of $399 for Vega 56 and $499 for Vega 64. If OC UK's Gibbo is to be believed however, all of that was pretty much a lie. The $499 (or £459) MSRP of the RX Vega 64 was nothing but an introductory 'early adopter' discount that was applicable only for the first batch shipped to retailers. According to the same source, the discount in question was £100, which would make the actual MSRP £559 or $599. Before we go any further, here is a direct quote from Gibbo:

Now the good and bad news, the good news is AMD are rebating early launch sales to allow us to hit £449.99 on the stand alone [RX Vega 64] black card which has no games. This is a launch only price which AMD at present are saying will be withdrawn in the near future, when if it happens is unknown, but remember do not be shocked if the price jumps nearly £100 in a few days.

This time round there is no early adopter tax, quite the opposite on the stand alone black card, so do be quick.

We've also made some bundles as well, these bundles feature NO DISCOUNT, what you get is two AAA titles known as Prey and yet to be released Wolfenstein II PC games, worth a solid £50 between them. Well I lie, they include the Black Card which has £100 discount up front, so by buying the bundles you get the black card at the launch discounted price, but also score the two free games. This is also same case for the Samsung & VEGA monitor bundle, it includes the black pre-discounted card, but also scores you the two free games. - Overclockers UK's Gibbo

AMD will include a few gaming titles with the re-worked MSRP as compensation, namely Prey and Wolfenstien II, but that hardly makes up for an increase of $130 over the launch MSRP. Considering the fact that the first batch of AMD RX Vega GPUs sold out within minutes of the launch, we can safely assume that the first batch allotted to retailers has been exhausted, meaning the new MSRP will kick in soon.

As you can see the 'standalone' RX Vega 64 will no longer be available after the initial sales window (which might or might not have already lapsed) and instead you will be able to get the RX Vega at an increased price but with the consolation of 2 AAA titles worth about £50 or $64. This of course explains the inflated prices we were seeing on Newegg (which usually follows the MSRP unlike Amazon which allows dynamic pricing by demand). The MSRP for the standalone Black version and Liquid version are exactly in line with what Gibbo is claiming: 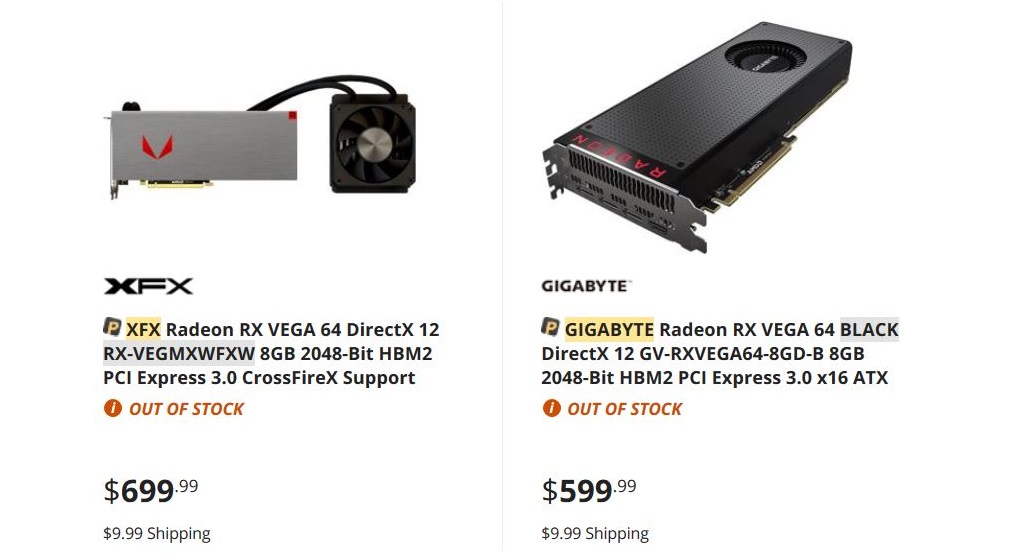 The new MSRPs of the air and liquid cooled edition are $599 and $699 respectively.

I have to say that I wasn't expecting this type of anti-consumer behavior from AMD.  The reason that they are apparently giving is to scare off miners by forcing people to buy 'Radeon Packs' but this is something that can be easily solved by limiting standalone GPUs to 1 pc per customer and is basically nothing more than a glorified excuse. It is an especially low blow because AMD stated that the entire point of the Vega delay was to accumulate stock for launch and yet we saw that their entire inventory evaporated within minutes of launch, making it one of the worst stocked GPU launches in history.  Consumers will now pretty much be forced to by Radeon Packs at gunpoint. One thing is for sure however, every reviewer needs to update their conclusions based on the new MSRPs.