Tesla Up By 11% On Open Market Following Fourth Quarter Earnings 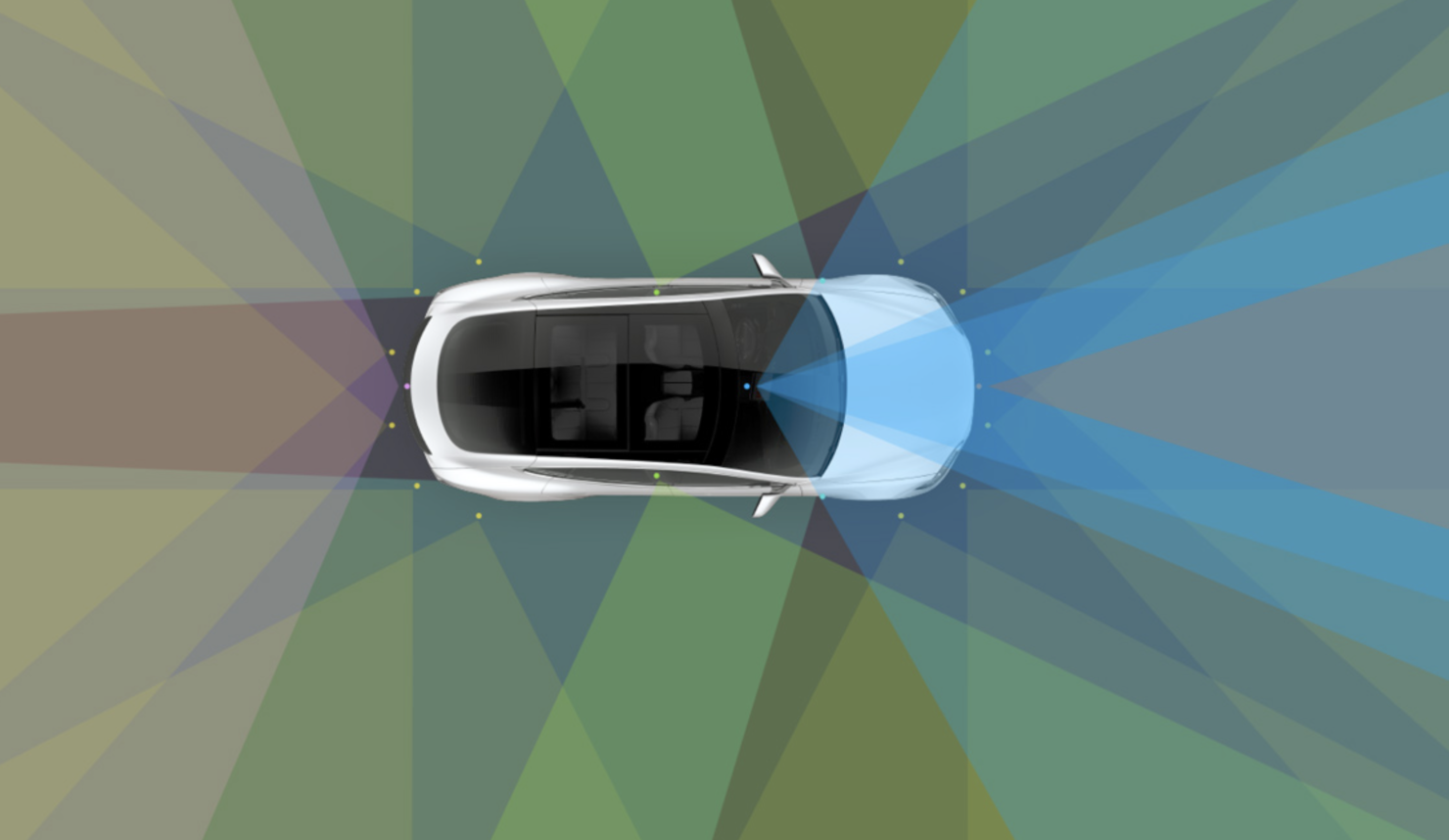 Electric vehicle and energy products automaker Tesla Inc (NASDAQ:TSLA) reported its fourth-quarter 2019 earnings yesterday and the company's stock shot up by 6% immediately. The company had been notorious for problems with manufacturing and deliveries during its initial days but ever since Tesla smoothed out its act with the Shanghai-based Gigafactory 3, the company has been a Wall Street darling. On that note, shares of the automaker are now trading at $645.38, up by 11.08% over yesterday's closing of $580.99 as it beat earnings-per-share estimates by a wide margin yesterday.

Even as Tesla touches new high on the open market today, its earnings for the fourth quarter of 2019 do not represent growth in all areas. The strongest points highlighted in yesterday's results deal with the company's operational performance and cash flows. These metrics are often some of the most crucial ones when analyzing a company since they let us know the direct material impact of its operations.

For its 4Q 2019, Tesla Inc had $1.425 billion in net cash provided by operations. This marks for a 15% year-over-year and 88% sequential jump and is a healthy indicator for a company that has struggled to reach profitability several times in its past. Tesla's free cash flow in the quarter paints an even healthier picture and is no doubt serving an important role in making investors happy.

In its previous quarter, the company posted $1.013 billion in free cash flows, marking for a 17.3% sequential and 11% year-over-year growth. Even more impressively, the company's cash and cash equivalents have gone through the roof in its fourth quarter of 2019. For the quarter, Tesla had $6.268 billion in cash and cash equivalents, marking for a 70% year-over-year growth and 17% sequential growth. However, these non-income statement metrics are perhaps some of the only positives that came out of yesterday's earnings. 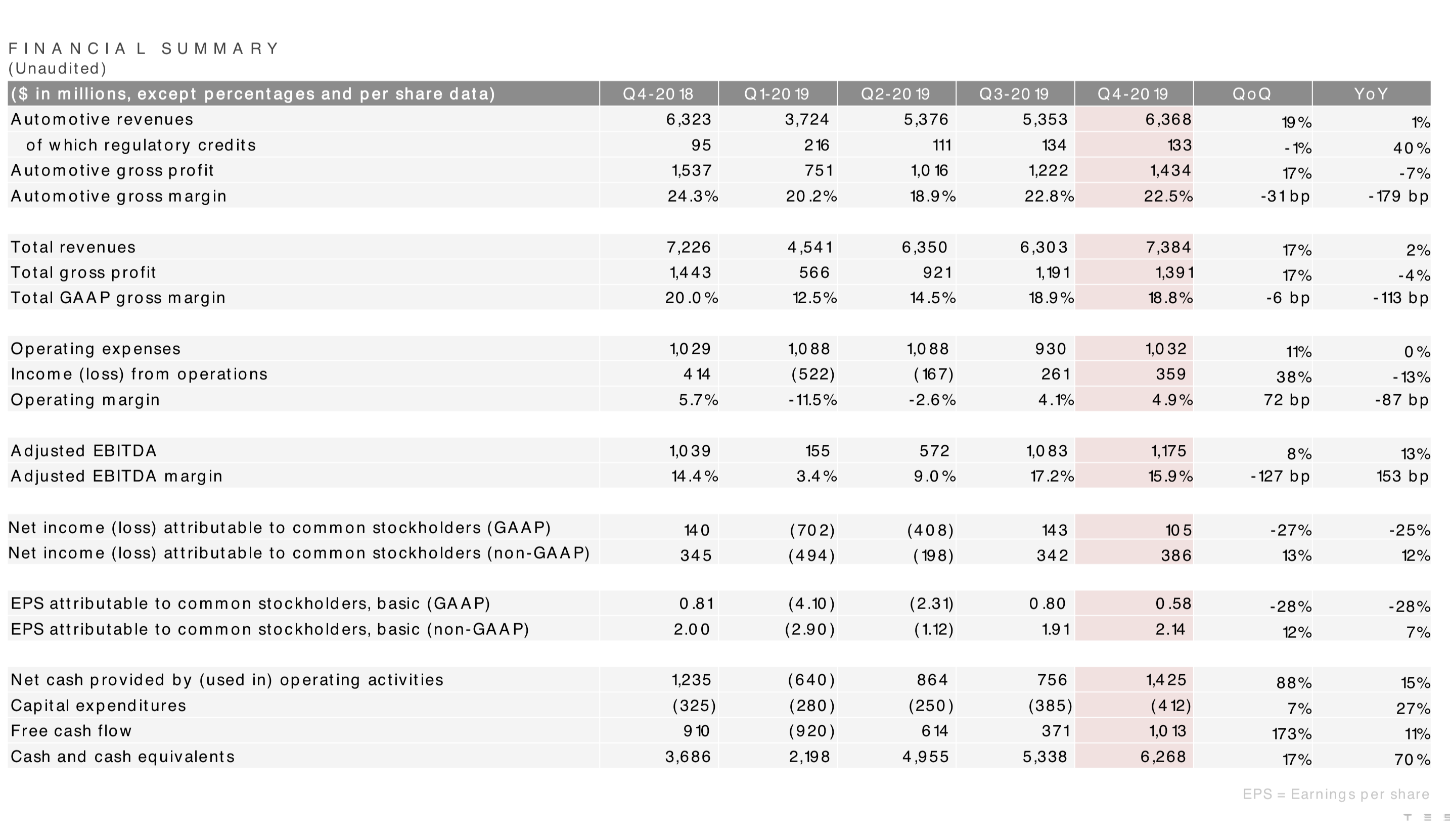 Tesla unaudited financial summary for the fourth quarter of 2019.

Taking a look at Tesla's income statement, the first metric showing growth is revenue. The company posted $7.384 billion in revenue for its fourth quarter, marking for a slight year-over-year growth; a fact that is disconcerting given the optimism we've seen surrounding its China Gigafactory, and the growth in Model 3 deliveries reported throughout the globe by Tesla for 2019. Tesla cites lower average selling prices as the reason behind slow revenue growth for the quarter and it states that ASPs will not change significantly in the near future.

Moving forward, Tesla's operating expenses for the quarter stood at $1.032 billion, up by $102 million sequentially and flat year-over-year. Interestingly, the sequential growth is not mostly attributable to any increases in cost that the company might have witnessed through activities associated directly with its operational activities. Instead, as confirmed by Tesla (NASDAQ:TSLA), $72 million of its operating expenses in the fourth quarter of 2019 are due to a non-share-based award to chief executive officer Mr. Elon Musk for a 2018 C.E.O award on achieving operational milestones.

Finally, Tesla's net income for the quarter has decreased sequentially and year-over-year. For its 4Q19, the automaker has reported $105 million in net income, down by 25% over the $140 million that Tesla earned in its fourth quarter of 2018, and down by 27% over the $143 million that the company earned in its third quarter of 2019. This naturally leads us to some interesting fact-based conjecture which leads to the simple conclusion that had Mr. Musk chosen to forfeit his reward, then the company would have exhibited a sequential and yearly net income growth in its latest quarter.

Tesla's effective tax rate at the time of writing is 14.2% and assuming that its top executive chose to forgo the $72 million award reflected in the company's operating expenses, then Tesla's net income stands to rise by roughly $62 million - effectively allowing the company to post a 19% year-over-year and 17% sequential growth in net income. Additionally, Tesla's receivables for the previous quarter have grown by 39.5%, surpassing its revenue growth by a wide margin. More details on this area should be clearer once detailed results are out.