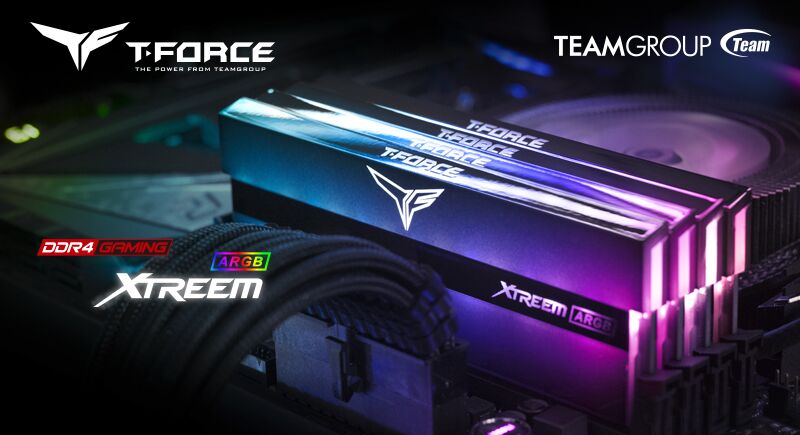 Teamgroup has released a new product to its portfolio, the T-FORCE XTREEM ARGB DDR4 Gaming Memory featuring RGB LEDs, full mirror reflections, and clocks of up to 4800 MHz providing both high performance and attractive design.

Teamgroup's T-FORCE XTREEM ARGB Gaming Memory is the first DDR4 memory kit to feature full-screen light guiding technology which creates distinct reflections off of surrounding objects for additional lighting and visual appeal. Teamgroup's new memory kit features a fully reflective heat spreader unlike any previous kit seen before, and for someone looking to add some visual weight to their build, this memory may be the kit for you.

This is achievable through Teamgroup's combination of 'light-spluttering' and light guiding technology, both of which create the optical effect of a glowing, illuminated mirrored surface. Teamgroup's has designed a special LED lighting method to make this happen, and in doing so, have also enabled users to tweak the RGB lighting to their desired preferences.

Teamgroup's RGB lighting supports all major brand lighting control software such as ASUS AURA and GIGABYTE's RGB Fusion so users can sync and tweak the style of their memory without the need for an additional program. If RGB lighting isn't in your interest, it is also possible to disable the effect, and in doing so, still retains the mirror effect of the heat spreader.

Teamgroup's new gaming memory has a built-in OC profile that allows easy single-click overclocking whether installed onboard an AMD or Intel system. The T-FORCE XTREEM ARGB Gaming Memory supports up to a 4800 MHz memory clock achievable only through the careful selection and testing of memory ICs. Each memory IC is tested for complete compatibility and stability, ensuring an easy install process for the end-user.