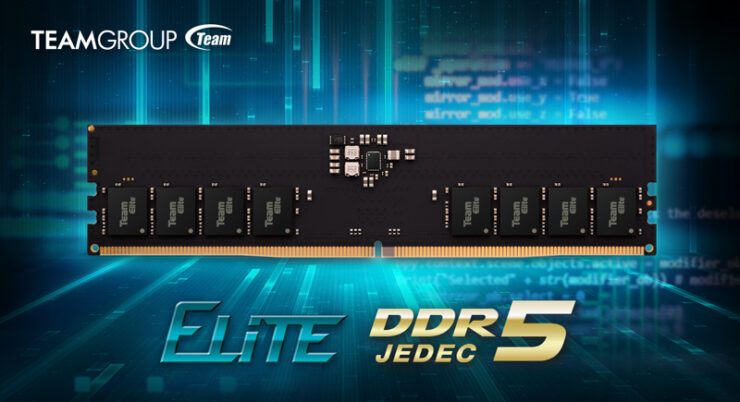 TEAMGROUP is the first manufacturer to have its mainstream consumer DDR5 memory hit online retail outlets such as Amazon and Newegg. The Elite series DDR5 memory kit was announced this month and is now listed by several retailers.

The TEAMGROUP ELITE DDR5-4800 memory kit was listed in stock briefly by US retailers but even though there aren't any mainstream platforms that support it right now, the kit has already gone out of stock with Newegg stating 'High Demand' as a reason. Both Amazon and Newegg listed the memory kit for a price of $310.99 US which is much lower than $399.99 US which the manufacturer had originally stated during the announcement.

It's possible that users are getting ready in advance for their new PC builds with the news about Intel's Alder Lake platform coming out soon. There's a very likely scenario that users are trying to avoid any potential shortage of DDR5 memory at launch and hence going after whatever stock is available right now. The other likelihood is that scalpers are once again grabbing new hardware just so they can sell them at inflated prices in the used marketplace once demand rises which is what we saw happen with GPUs, HDDs, and even TPM modules (with the recent Windows 11 OS announcement).

You can find the product listings in the following links:

The product page for the TEAMGROUP DDR5 ELITE series lists down 16 GB capacity per module, DDR5-4800 transfer speeds, and twice the number of memory banks compared to DDR4. The DDR5 memory module will also operate at an ultra-low voltage of 1.1V. The DDR5 memory modules also feature on-die ECC support PMIC (Power Management IC) which increases efficiency. From the renders, it can be seen that the Elite series DDR5 memory is very basic, featuring a black PCB and no heatsink.

Some features of TeamGroup's Elite series memory include:

T-Force also states that DDR5 memory has far greater room for voltage adjustment when it comes to overclocking support. This is primarily due to the upgraded power management ICs (PMIC) that allows for voltages over 2.6V. It is also detailed that existing DDR4 memory modules handled their voltage conversion through the motherboard but that changes with DDR5. The components that are required for the voltage conversion are now moved over to the memory DIMM itself, reducing voltage wear and noise generation while simultaneously offering increased room for overclocking. You can check out more detailed specifications of next-gen consumer memory over here.