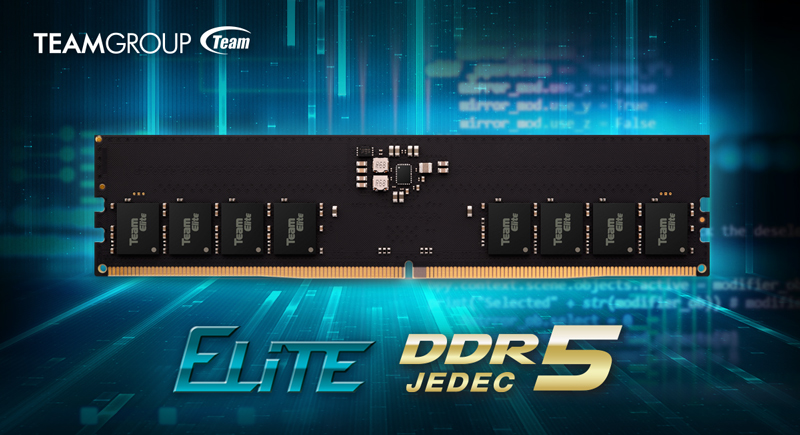 TEAMGROUP has officially launched its first DDR5 memory kit, the ELITE DDR5 U-DIMM series. The memory kit is ready for next-generation DRAM platforms which will support the new standard and offer increased capacities and transfer speeds versus DDR4 memory.

The TEAMGROUP DDR5 ELITE series is going to be the base variant in the company's DDR5 lineup moving forward. The kit is expected to be available worldwide by the end of June & the beginning of July (some regions).

The product page for the TEAMGROUP DDR5 ELITE series lists down 16 GB capacity per module, 4800 MHz transfer speeds, and twice the number of memory banks compared to DDR4. The DDR5 memory module will also operate at an ultra-low voltage of 1.1V. The DDR5 memory modules also feature on-die ECC support PMIC (Power Management IC) which increases efficiency. From the renders, it can be seen that the Elite series DDR5 memory is very basic, featuring a black PCB and no heatsink.

The memory module is applicable for Intel 600 series motherboards with DDR5 compatibility. TEAMGROUP's DDR5 will be available globally at the end of June and the initial product launch will be hitting the shelves at Amazon US, Newegg, Amazon Japan, and various major EC platforms in Europe. Gamers, get ready for the first taste of the next generation and embrace the glory of the new DDR5 era with TEAMGROUP.

Some features of TeamGroup's Elite series memory include:

T-Force also states that DDR5 memory has far greater room for voltage adjustment when it comes to overclocking support. This is primarily due to the upgraded power management ICs (PMIC) that allows for voltages over 2.6V. It is also detailed that existing DDR4 memory modules handled their voltage conversion through the motherboard but that changes with DDR5. The components that are required for the voltage conversion are now moved over to the memory DIMM itself, reducing voltage wear and noise generation while simultaneously offering increased room for overclocking. You can check out more detailed specifications of next-gen consumer memory over here.