Tales of Zestiria: Collector’s Edition Available for Pre-Order on Amazon

Amazon has made available for pre-order the Tales of Zesteria: Collector's Edition for the PlayStation 4. The bundle is priced at $129.99. 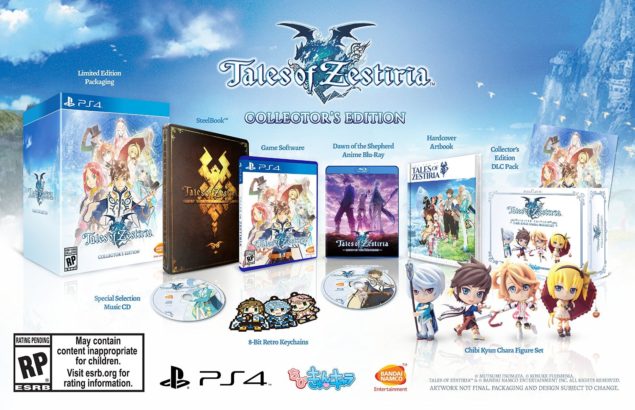 The Tales Of Zestiria Collector’s Edition includes a copy of the game, a limited SteelBook, the Dawn of the Shepard Anime Blu-Ray, Hardcover Artbook, a Special Selection Music CD, the 8-bit Retro Keychains, the Chibi Kyun Chara Figure set and the Collector’s Edition DLC pack.

It certainly is an amazing package for fans of the series and JRPG lovers.

Bandai Namco Entertainment of America has released a new trailer from the Anime Expo 2015, for their upcoming Tales of Zesteria RPG, coming to the PC, PlayStation 4 and PlayStation 3 in October 20, 2015.

A brand new adventure awaits in a fantasy world filled with magic, knights, dragons and mystery in Tales of Zestiria. Two nations fight for supremacy and the fate of the realm lies in the hands of Sorey, an inquisitive young adventurer who takes on the burden of becoming the Shepherd, the one the legends foretold would become the savior of all. Together with Lailah, the Lady of the Lake, who guards the Sacred Blade, and his best friend Mikleo, Sorey soon discovers a powerful force rising in the shadows.

In Tales of Zestiria, players will delve into a grand storyline and discover the “zest” of adventure with brand new characters, magical lands and action-packed gameplay that the ‘Tales of’ franchise is known for from fans around the world.

Tales of Zestiria returns to the series roots of a fantasy setting with character designs being handled by all four series designers; Mutsumi Inomata, Kosuke Fujishima, Daigo Okumura, and Minoru Iwamoto. The story follows Sorey, a man blessed with powers by a mystical spirit race known as the Seraphim who act as a stabilizing force in the land, as he travels to free the land of Glenwood from the threat of the Hellion, creatures spawned by negative emotions.

The Tales Of series is a long running cult JRPG saga created back in 1995. The different iterations over 20 years all kept the emblematic features fans loved like the sense of fantasy adventure and the trademark battle system, while crafting new universes, characters and stories every time. The games focus on humanist themes such as family, love, friendship and duty, and its battle system would go on to spread across the JRPG landscape. The upcoming Tales of Zestiria is a tribute to the series’ 20th anniversary.

You can check out the awseome trailer for the Tales of series 20th aniversary as well as a Tales of Zesteria 'System'  trailer below: