Possibilities for Star Wars Battlefront Offline MP are still being investigated by DICE, but developments are “promising” according to DICE’s lead designer. 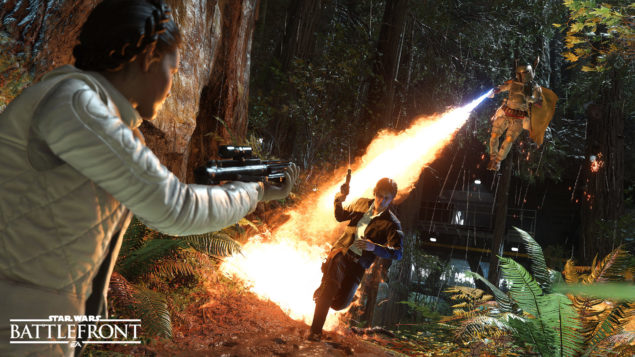 An offline multiplayer mode for Star Wars Battlefront, was first talked about last month when a player asked about the feature on the official SW Battlefront forums. DICE is aware of the request, but the feature has some technical hurdles that need to be solved.

Apart from this, no new details have been released on the offline mode for the highly popular Star Wars shooter. Luckily, the feature hasn’t been forgotten, at least if lead designer, Dennis Brännvall, is to be believed. According Brännvall, he’s answering questions about the feature daily via Twitter.

When asked whether the offline mode will for full use of the game’s features, the lead designer replied that DICE is still investigating what the team can do for offline MP long-term.

@Cosmic_dwarf @Marco_Nardini92 still investigating what we can do for offline longterm

New details on the offline mode have yet to be revealed, and when asked when new information will be shared, Brännvall replied that a date hasn’t been set, but developments on the mode are looking “promising”.

@Mystleviathan no date yet. Promising developments

We’ll keep you updated when we learn more about Battlefront’s offline multiplayer mode.

Patch 1.04 for Star Wars Battlefront was released some weeks ago, and added new Hoth-themed outfits, private Matches, new multiplayer modes for the Tatooine Survival map, and much more. For the full patch notes, check out this post.

New season pass info was allegedly leaked on the official Star Wars Battlefront last week, and according to the anonymous Star Wars Battlefront user, the first DLC pack, Outer Rim, will be released on March 12th. The pack will include two new game modes called Invasion and Scramble, as well as new weapons and abilities.

Star Wars Battlefront is now available for PS4, Xbox One, and PC.

Star Wars Battlefront To Get New Update In Early May, New Free Content To Roll Out Over Next Three Months