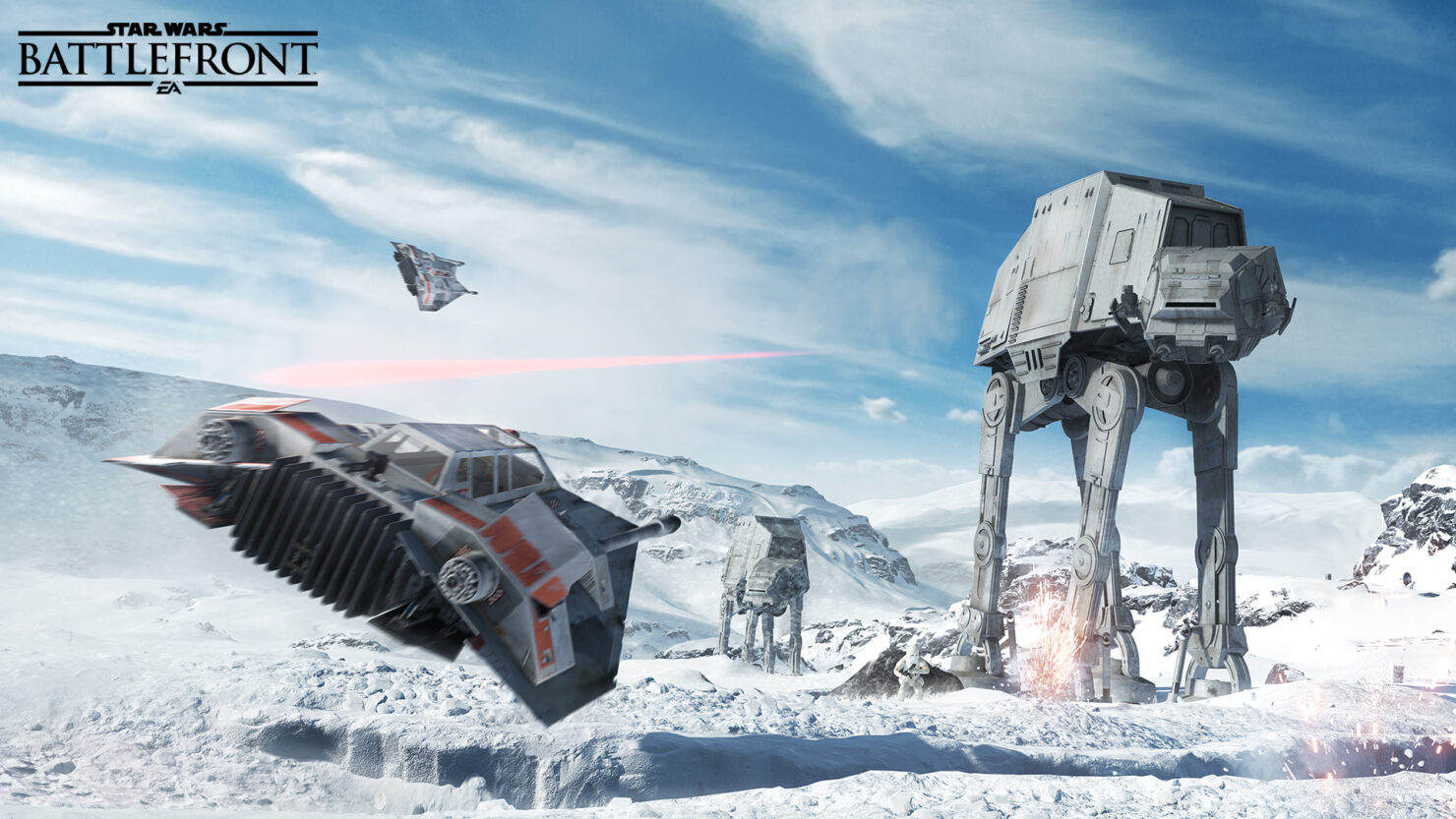 Yesterday, EA and DICE shared a new trailer for the Star Wars Battlefront Bespin DLC, which includes plenty of exciting additional content. The new DLC has been released a few hours ago for Season Pass holders alongside a new update, which introduces support for Bespin as well as plenty of changes, tweaks and new features.

Among the new changes introduced by the new Star Wars Battlefront update are a new rank cap, new unlocks for Rebels and Empire and several balance tweaks that will make the experience more enjoyable for all.

Here are all the details of both Bespin DLC and new Star Wars Battlefront update.

Five new maps set around or on Cloud City.

New Weapons
X-8 Night Sniper: A blaster pistol with a focus on long range and a night vision scope.

Shock Grenade: A non-lethal grenade with a small radius that will stun opponents caught in the blast.

Scout Binoculars: Outlines enemy soldiers when zooming through the goggles. After pressing fire, any soldiers in line of sight get tagged for your entire team for 4-5 seconds.

Disruption: Instantly overheats the weapons of any soldiers in close proximity to the player.

Lando Calrissian
- Power Blast – Once activated it will give a critical modifier on Lando’s blaster fire for a limited time
- Shocking Trap – Throws a decoy on the ground to confuse the enemy and shock anyone that gets close.
- System Disruption – Disrupt all nearby enemies weapons & star cards, setting them to overheat / cooldown. Also affects Hero abilities.

The Empire are using Tibanna Gas Generators to power their tractor beams, preventing Rebel transports from escaping Cloud City. The Rebels must blow up the generators and defend their extraction point. The Empire must stop the Rebels and hunt them down.

Partner: Staying close to your partner will provide you with reduced cooldowns for all your Star Cards. This is illustrated via an icon above the in-game soldier. An exclamation mark means that you are too far away, a check mark means you are within distance, and a cross means your partner is dead.

Partner: Enemies that kill your partner will have a red outline for a brief period.

Partner: The game will now always try to auto assign you a new partner whenever you do not have one in-game. There are also in-game notifications to inform you that you’ve lost a partner and if a new partner has been found.

Partner: If you are not able to spawn on your partner there are now written explanations as to why. They are: Partner is in danger, Partner is out of bounds, Partner is inside a vehicle, or Partner is dead.

Partner: The distance to enemies that prevent spawning on partner has been reduced from 20m to 2m.

Immortality: The immortality issue that could occur when spawning in to vehicles has been resolved. The time to spawn in to a vehicle has been reduced and players are no longer protected by immortality during this time period.

Social Hub: Resolved the issue related to players getting disconnected when navigating to a friend’s profile in the social Hub.
Rebel Vehicles: Added a modifier to X-Wing, A-Wing, and Millennium Falcon weapon energy when the shield is active. While active, weapons deal 25% less damage than what they do when the shields are not active.

Enemy Highlights: Enemies will be highlighted if they are inside the player’s crosshair for more than 1 second. The highlight will be removed after the crosshair isn’t on the enemy for 1 second.

Traits: Whenever an enemy has reached the third level with a trait card, it will now be visible above his health bar.

Frontend: A Cloud Car has been added in the rotation of FrontEnd objects.

Text chat (PC): Has been added to various places in the game, such as loading screens, lobby and End-of-Round.

Grenades: Resolved a bug in which there would be two grenade indicators overlapping when throwing a grenade.

Text chat (PC): Numpad Enter is no longer used to open the chat. Only regular Enter works.
Idle kick: Improvements to the system have been added and there’s now a countdown timer to illustrate when you will get kicked from the round.

Event log: Callouts have been added when a Hero suicides or leaves the game.

End-of-Round: The summary page has been updated and now displays a few key stats from the concluded round.

End-of-Round: Added a “Skip” button in the end-of-round flow, once the next level has loaded.

Kill Card: Resolved a bug in which the trait card would occasionally be blank for some players.

Hutt Contracts: Resolved a bug in which the

Hutt Contract screen would still be present in the rest of the menu.

Match Making: Resolved a bug which caused the status to be displayed as “Expanding search to 0% full games”. The matchmaking systems as not affected by this bug as it was purely a visual issue.

Community: Added a unique identifier for all developers in-game.

Charges: Players will be able to deactivate charges by holding down the Y/Triangle button on console and 2 on PC. Once this is done the effect will be removed and the charge will instantly enter a cool down state.

Scan Pulse: This card now continuously sends out pulses at set 2 second intervals. When someone is pulsed, they will remain visible for 0.5 seconds.

Bowcaster: The fire pattern has been altered. The following pattern will be used when charging the weapon:
- Center projectile
- Left & Right projectiles
- Top & Bottom projectiles

Pulse Cannon: A laser glint has been added so players that are being targeted by the pulse cannon will be able to see a green laser on their screen thus revealing the location of the attacker.

Explosive Shot: The charge now will cause double the heat buildup on any weapon when being used. To balance this the time the charge is active has been increased for both normal (5 to 7s) and upgraded (7 to 10) cards.

Berserker (Trait): The berserker effect will trigger on 78% HP or less

Berserker (Trait): A vignette has been added to inform the player that the berserker effect is active.

Berserker (Trait): The armor multiplier has been increased while the berserker effect is active.

Heroes: Reduced damage to heroes from Pulse Cannon from 150% to 80%.

Palpatine: Increased lightning damage from 20 to 22.

Boba Fett: Modified the behavior of the flamethrower to be more responsive.

Boba Fett: Reduced time for jetpack regeneration from 2 to 1.6 seconds.

Boba Fett: Lock-on distance for wrist launcher added for up to 25m.

Bacta Bomb: Updated some hero abilities to be more effective against players that are currently under the effect of the Bacta Bomb.

Heroes: The health pick-up icon has been updated with a new visual look.

Leia & Palpatine: Resolved an issue in which the honor guards could spawn on both Leia and Palpatine when they were out of the combat area.

UI: Game mode HUD is visible when observing the scoreboard.

Pre-round: Combined the in-game lobby and the

pre-round timer to be the same. Now the game mode will instantly start as soon as you can join from the in-game lobby.

Droid Run: Decreased the time for capturing a droid from 20 seconds to 10 seconds.

Droid Run (audio): Tension music has been added and will trigger whenever a team is close to win.

Walker Assault: Improved the system which handles uplink activation and deactivation so that the player can’t interact with them once the Y-wings are about to spawn in.

Fighter Squadron: Increased the score limit from 200 to 400.

Blast: Resolved an issue in which the round would end in draw when the score was 100/99.
Turning point: Resolved a bug in which the wining team could switch from empire to rebels if there were rebels present on the final control point exactly when the match ended.

Heroes Vs Villains: Changed the starting times. First round starts after 60 seconds, all rounds after will start after a 20 second delay.
Extraction: Improved the button call out on the Shield & Shipment controls. Before they could appear visible when they weren’t usable.

Scoring: Resolved a bug which caused the player getting 400 points or more for healing an Honor guard with the Bacta Bomb.
Scoring: Removed the event for kill assist & critical kill assist and replaced it with a regular kill. If you deal more than 25 damage to an enemy, you will automatically get a kill.

Scoring: Updated the score log and how certain scoring events are presented. Kills will now only state which weapon was used to kill a target as well the name of the target.

Scoring: Resolved the issue in which vehicle damage scoring event would clutter the score log when dealing a lot of damage within a very short time-span. Now you will see points accumulate, but the score log will not display any text when dealing damage.

Scoring: Explosive bonus and kill streak have been hidden in the score log. Players will keep getting extra points for performing more than 4 kills within a life, but there will be no text in the score log. The amount of

Star Wars Battlefront is now available on PC, PlayStation 4 and Xbox One. The Bespin DLC is now out for Season Pass Holders, while the new update is out for all users.