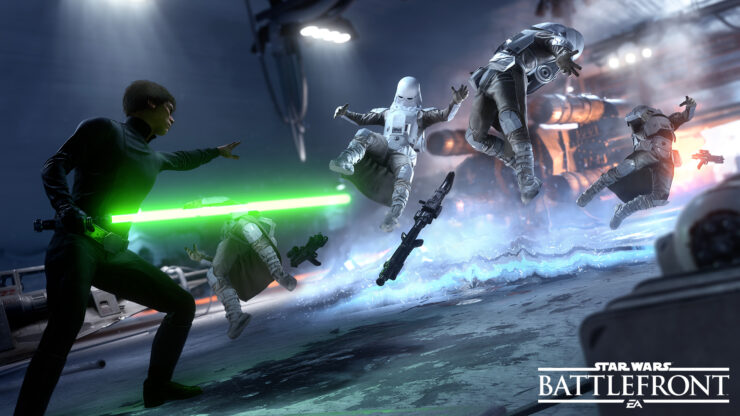 Last week, EA and DICE confirmed that an offline mode called Skirmish Mode would soon become available for Star Wars Battlefront. The update introducing this mode, as well as other tweaks and fixes, is now available for download on PC.

The Star Wars Battlefront new PC update is now available for download in all regions. The update is around 3.91 GB big, according to reports, so it may take some time to download, depending on the connection speed. Full patch notes for all formats have also been made available, and you can check them out right below.

General:
Skirmish: A new mode, Skirmish, is now available for all players.
Play Walker Assault or Fighter Squadron against AI bots together with a friend in online co-op, split screen (console only), or singleplayer.
Partner: Increased the spawning checks made on partner from 2 seconds to 1 second in order to more accurately determine if you are able to spawn or not. This should make it less likely that players will be able to partner spawn when being close to an enemy before a fire fight has started.
Partner: Spawning is disabled on partners if an enemy is within 10 meters, changed from 2 meters.
Cloud Car: Resolved a bug in which the blaster VFX incorrectly fired while playing in first person in the cloud car.
Scoring: Changed the kill assist event to not trigger a kill and count towards your next trait rank. Now a kill assist will only give score.
Team balance: Resolved a bug in which a team could be split and no auto partner assigned if the server had a low player count.
Appearances: Resolved the bug that made all Rebel items usable on the Bespin maps without purchasing them. Maps & Game Modes:
Pre-round: Changed the pre-round timer from 60 to 90 seconds
Administrator's Palace: Resolved a bug in which Boba Fett could reach an invisible collision box located very high up on the level.
Cloud City: Resolved an issue with a misplaced out of bounds area.
Cloud City: Resolved an issue in which the capture area for an objective in Turning Point was cut off by out of bounds.
Cloud City: Resolved various instances in which the players could fall through the map and not die.
Heroes Vs Villains: Round ends after three rounds on the Outer Rim levels.
Cloud City & Turning Point: Moved back the Imperial spawn locations from the last set of capture points.
Cloud City & Walker Assault: Reduced amount of turrets & droid power-ups for the Empire.
Cloud City & Walker Assault: Increased the time for AT-AT Pickups to spawn from 30 to 100 seconds.
Cloud City & Walker Assault: Changed the AT-ST token respawn time from 34 to 60 seconds.
Cloud City & Supremacy: Increased the size on the final Rebel objective and moved it slightly.
Cloud City & Supremacy: Resolved a bug in which the hero spawn was outside of the combat area, resulting in the player dying when spawning in.
Supremacy: Changed the default respawn time for AT-ST tokens from 34 to 60 seconds.
Bioniip Laboratories: Resolve a bug which limited the usage of orbital strike to a few select areas. Now it should be usable a lot more on the open areas on the map.
Bespin: Updated various locations where objects weren’t correctly placed next to each other creating breaks on the maps.
Twilight on Hoth: Resolved an issue with a DF-9 being partially hidden underground which resulted in players falling through the level when they tried to exit the turret.
Hero Hunt: Resolved a bug in which players wouldn’t correctly spawn as a hero and would remain a soldier, making it so no one could be killed and no new hero spawned.
Hero Hunt: Resolved an issue in which 20hp was only granted from health pick-ups and not 50hp.
General: Resolved a bug in which players could get stuck in the lobby if the teams were unbalanced and the pre-round timer had started.
General: Staying in close vicinity of any game mode objective will decrease the cooldown of your star cards.

UI:
Spectator: Resolved a bug in spectator mode which caused the charge icon to get stuck in an enlarged state when observing a player in private matches.
Spectator: The switch team button has been removed from the spectators view.
Private Matches: Players are now unable to switch teams after they have become a hero in hero hunt or heroes vs villains.
Heroes Vs Villains: Resolved a bug that would make the UI disappear in the lobby for players on the same team as a player who left the server.
Charge: Resolved an issue which caused the charge icon above an enemy to cover the health bar if active at the same time as a level 3 trait was reached.
End of Round: Resolved issues which caused text overlapping to occur for stats in some game modes and for certain languages.
Partner: We now correctly show the yellow partner color instead of green when playing as a hero or inside a vehicle.
Texts: Added the trait descriptions for Lando Calrissian, Dengar, Nien Nunb
Text: Resolved various spelling issues, spacing, missing commas etc.
Weapon & Star Cards:
Shock Grenade: Slight decrease to bounce speed multiplier and increase to explosion delay to prevent grenade from detonating in air after bounce.
RelbyV10: Changed weapon sway from 0.8 to 0.5 and the amount it’s increased by from 0.2 to 0.1. Recoil per shot has changed from 0.3 to 0.1.
X-8 Night Sniper: Changed weapon sway from 0.35 to 0.2, increased start damage from 32 to 40, and changed end damage from 20 to 25.
DT-12: Increased the fire rate from 220 to 250.
DLT-44: Increased rate of fire from 180 to 210 and increased end damage from 13 to 19.
EE-4: Changed the dispersion angle from 1.5 to 1.75, reduced the end damage from 10 to 9, and changed the damage falloff range from 20 to 10 meters.
Cloud Car: Lowered damage multiplier against Cloud Cars with blasters and Ion Neutralizer
Disruption: Changed the penalty time from 2 to 1 second.
Disruption: Increased the cooldown for standard from 18 to 23 seconds and upgraded from 16 to 20 seconds.
Scout Binoculars: Fixed issue where binoculars wouldn’t spot soldiers in Missions
Scout Binoculars: Fixed issue where the binoculars wouldn’t spot enemy soldiers when looking up and down