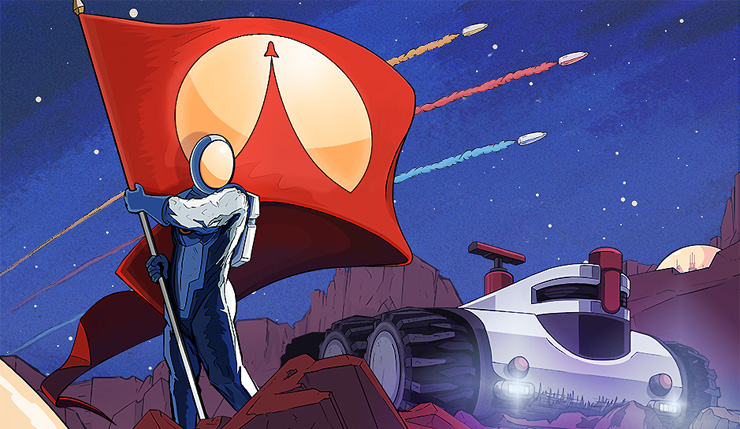 A Challenger Appears: Compete for milestones and anomalies with several other AI colonies backed by rival sponsors attempting to set roots on Mars and vie to become this planet’s superpower. You can trade with, respond to distress calls for, issue distress calls to, and even steal important colonists from these competitor colonies as you establish your territory on Mars.

Earth to Mars, repeat, Earth to Mars: No matter how deep in space you go, you need to follow the money. Each sponsor comes with unique goals to complete as you further their individual goals for colonization.

Represent the Home Team: Each sponsor has their own unique vehicle and building that only their colonies can construct and take advantage of in their mission. Express the individuality of your space-faring conglomerate inside and out of your domes.

New Money, New Problems: Meet two new players in the fight for the final frontier. Japan and Brazil are now available as brand new mission sponsors and are ready to move heaven and Mars to make their mark!

Expect the Unexpected: Experience narrative events throughout your colonization process that help reveal the realities of life in the dome and challenge your management skills.

Space Race sounds like a fun, logical expansion of the Surviving Mars concept. Will you try to get along with your fellow colonists, or will you crush the competition?

Surviving Mars is available now on PC, Xbox One, and PS4. The Space Race expansion touched down on November 15.