Star Wars The Old Republic Review, After So Many Years

I think that a lot of Star Wars fans that are gamers probably do indeed want a game that truly captures the essence of what Star Wars really is. There are many that have tried, and succeeded, but there are none that let you make your own way in a dangerous and daunting galaxy. Anymore at least. Star Wars The Old Republic is the current and only contender available in an MMO flavor, though many games exist. Does it hold up to scrutiny though? Is it even fun to play? 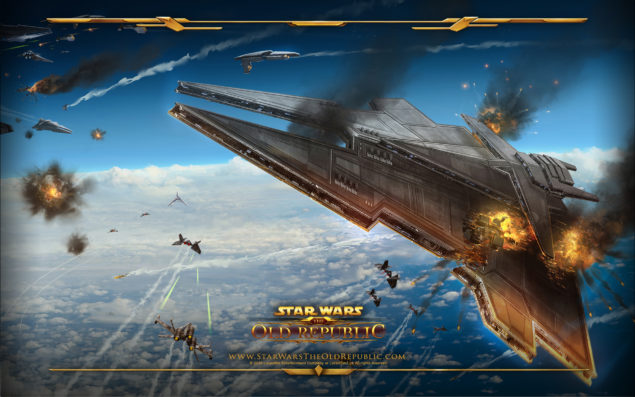 Symbolic of how the game is crashing down upon itself.

I decided to fire up Star Wars The Old Republic once again after almost a year long hiatus.

Star Wars the Old Republic is a great but deeply flawed game. I like Star Wars, though, so I play it and I enjoy the stories that are presented in the game. But maybe I don’t enjoy it as much as I thought I would because I’m not much of an MMO fan. I understand where the fun comes from, I can see how they are enjoyable, but I hate the grind. There is as much a grind as there ever could be in any MMO or RPG. It’s frustrating to no end, and it takes a long time to get to that top level (now level 60) so as to enjoy the new Reven story line. But dammit I love the story! Lets talk about that for a minute without giving away any spoilers. I feel that BioWare takes great care in crafting unique stories that are deep in scope. They really suck you in. Like for realz. I was surprised at how much I enjoyed the individual story lines for both the Jedi classes, the Republic Trooper, Bounty Hunter and the Sith Inquisitor. Each story, up until level 50, is unique in how it approaches the galaxy.

The main story line is actually quite engaging, though. The huge scope of the galaxy and all the moving parts helps you to feel like you’re a larger part of the galaxy, actually making a difference. The single player campaign is what drew me to the game, I’m not much of a fan of the mechanics of MMO’s, and thus didn’t really enjoy the group dynamics. Instead I focused on the single player missions, following the story to its end. Levels 1-10 generally see you on your starting planet of choice, learning the game and setting the stage for the larger story.

As a bounty hunter I found myself coming to terms with a Hutt as I try to plan revenge as well as enter the Great Hunt. After the starting planet you’ll find yourself on the “home” planet of the faction you chose, Dromund Kaas or Coruscant. This is a further part of setting up that main story. On Dromund Kaas I found myself killing Imperials as part of my attempt to gain entry into the Great Hunt. Despite my earlier machinations on Hutta, I still wasn't able to secure that fully until I took on a number of other challenges.

After the faction world is complete, then you gain the use of a starship and can travel the galaxy! But you can’t really. You can theoretically go to any planet on the galaxy map, but unless you’re of the appropriate level for that world, then you can’t do anything except look at the pretty visuals and backdrops just outside the spaceport. All classes within a faction follow a general progression through the various worlds, but that isn’t a problem due to the deep and engaging story line for each class. It’s Star Wars, and the stories feel like Star Wars. If you’re a fan, it’s freaking free, might as well download it and give it a try. It’s fun, truly fun.

Dat music doe. One thing that is consistent throughout all Star Wars games is the quality and immersiveness of the audio. The music is classic Star Wars that includes tracks by John Williams as well as music that’s based off of the legendary music. It’s good, and each planet includes unique tracks that add to the immersiveness. The rest of the sound engineering is equally as amazing. You’ll be hard pressed not to enjoy the ambiance that rivals the real world. The voice acting is also top notch, with most if not all dialogue having been voiced by someone.

The visuals take on a very stylistic approach, and thus don’t exactly look like the most technically amazing game in the world, but it’s that visual style that really makes it unique and pretty fun to look at. The worlds are rendered in good detail with a color palette that isn’t exactly accurate, but fun and entertaining. There isn’t a whole lot of variation among characters either, but I feel this is more a decision made so that it could be playable on as many types of hardware as possible

So what are those flaws? Sometimes the Imperials seem a little bit like Cobra from GI Joe, from the uniforms to the general “feeling” when interacting with Imperial characters. It’s weird, but not a deal breaker by any means. Hell, I like GI Joe too, so what a great combination! Also, after level 50 the stories no longer become independent and lack that pizazz they had before then. Rise of the Hutt Cartel, while an interesting premise and certainly reminiscent of a good EU book, isn’t unique among classes and thus not exactly something you want to play again should you have multiple characters.

There's also the tendency to re-use the common elements of Star Wars that diminishes the value of those elements. It's the same underlying story each time, though presented with different fascia. The Star Wars EU writers have done a tremendous job keeping things fresh, but I think that BioWare didn't quite read those same books, even the one that preceded the game itself.

They've taken the good parts of Star Wars that made it a truly unique experience and they re-use them so terribly much that they lose that special magic they once had.

And Shadow of Reven? I’m still not quite through that expansion yet, but thus far it’s actually kind of annoying with the type of high level gear you have to have to be successful. I thought just being level 55 with relatively good gear would be sufficient. I was very very wrong. Back to the grind I suppose. In update 3 they introduced a new skill tree, or discipline system. Some seem to have taken this to mean that the whole entire system is different than it used to be. But it isn’t. It just looks different.

Something else really bothered me while playing an Imperial Agent character. The voice actor kept switching during cut scenes. First a more "American" accent, and sometimes a British accent. It was very interesting, and quite annoying.

Okay, it does operate differently, and limits a few of the advantages you could have in the previous system, but still. It isn't all bad. You still specialize like you used to, have a skill tree that progresses with each level but now have another pane that shows the skills you can select and spend skill points on.

What is different, however, is that some skills are guaranteed based on your level and your concentration while you can't spend skill points on skills from all the categories and have to choose one. This might be frustrating at first, and certainly is to those that like to pick and choose your path and take some from each. You still have skill points to purchase other passive and active skills, however. I think it’s a better system, personally. I also noticed that upgrading skills from the trainer no longer seems to cost credits like it used to.

I have to admit, I absolutely hate the MMO grind. It’s horrid and can take away from the fun. I’ve found that over the two years that I’ve been playing this game, I’ve had to take month long breaks from the constant leveling. I love the story, but I’ll be damned if I have to level any more. It’s annoying. If you’re an MMO fan, then it’s business as usual.

It's Star Wars alright. Star Wars The Old Republic captures the essential essence of the myth and packs it into a neat little package for you to enjoy. The problem lies in not in the main content, but in what happens after the main story line. MMO's in general seem to struggle with having enough content to keep you interested in the long term. It's something that quite frankly all games suffer from. Why play something again if you've beaten it?

SWTOR suffers this lack of content due to different reasons, though. The primary one being that Star Wars The Old Republic relies very heavily on the stories that it weaves. Interest is only kept up until the conclusion of that story, and that is the case here. The crafting system is limited, the activities post-story are especially limited. While the galaxy is big and there is a some measure of opportunity for group quests and even PvP aciton, the galaxy is not so open as to allow you to explore it without issue. You're limited based on the story that you are currently playing.

But that's what Star Wars is all about, though, isn't it? An epic and grand story. And really, Star Wars The Old Republic delivers on that. It has that story, and you can actually feel like a larger piece of the whole. But don't expect much beyond that, though.