The upcoming Star Wars Battlefront II might very well include playable VR content if the PlayStation newsletter is to be believed.

Sony placed a PSVR logo in its PlayStation newsletter this weekend, which was quickly spotted by several users on the NEOGAF forums. 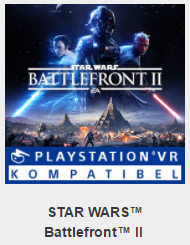 Star Wars Battlefront II was officially announced last month during the Star Wars Celebration. Unlike the previous Battlefront, the game will include a full-fledged single player campaign that focusses on the untold story of an Imperial elite special forces soldier.

In Star Wars Battlefront II, we all wanted to really capture the essence of being heroic and how in Star Wars, anyone can become a hero,” says Matt Webster, Executive Producer at Criterion. “Whether that’s playing as an iconic character like Rey or Luke, as a front-line trooper or fighter pilot in epic multiplayer battles, or playing through a new Star Wars story that bridges the gap between Star Wars™: Return of the Jedi™ and Star Wars™: The Force Awakens™, you will become a hero in Star Wars Battlefront II.”

“We wanted to create a campaign that told a story we haven’t seen before in Star Wars”, says Mark Thompson, Game Director at Motive Studios. “It was important for us to tell a new authentic story, one that gives players a brand-new perspective. By putting players in the boots of an elite member of the Imperial forces, we can show them what the battle was like from the other side.”

Star Wars Battlefront II will release on November 17 for PC, Xbox One and PlayStation 4.