Star Wars Battlefront is continuing to be in the spotlight, as producer Jesper Nielsen continues talking with the Reddit community, sharing some information with the fans.

First of all, we get a comment on why the prequel trilogy and the Clone wars have been left out.

“Sometimes you have to make choices, and those choices may be hard. We are the ones making the game and have to make hard choices sometimes. One of them was to focus solely on the Original Trilogy. The reasoning I’d rather have someone like Figge comment on.”

He continues to explain that Battlefront feels nothing like Battlefield.

He mentions that the Battle of Jakku DLC will not include any single player missions.

Ya know, all the details like that… just really makes the experience feel so rich.”

Space battles might be coming in the future, as they have been discussed as having some very exciting prospects.

“We have and are still discussing space every now and again. We know it has some very exciting prospects. So of course that would be fun to explore! When and if that will happen is impossible for me to say, but no, we’re not saying that space battles are evil and that we will never, ever touch them with a ten-foot pole.” 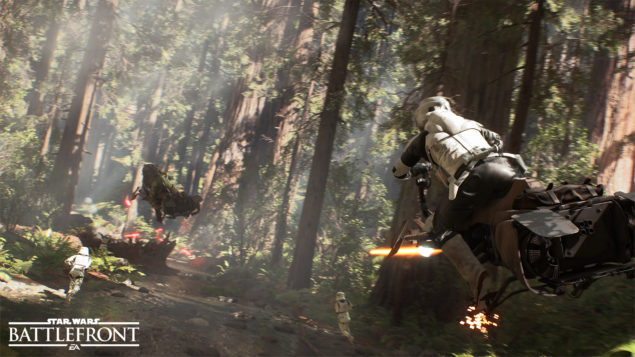 The majority of ideas are made by the development team and not the higher-ups. Some features that might not make it into the game might be coming later with a DLC.

“TBH, by far the majority of ideas and main decision-making is not made by higher-ups, but by the team. And yes, what you see in DLC is sometimes the result of things that you started thinking during the latter part of development.

We have a word in development for constantly adding new features: it’s called feature creep and it’s absolutely paramount to avoid that in the latter stages if you want to build a good game. It’s hard though! But as you will quickly learn as you embark on game development; the truly hard part is finishing and shipping the game.”
He then gave his insight on the replayability of single player missions:

“What I will say is… I haven’t tried every single mission yet and obviously we’re not done with the game yet, but from what I have played, I think they offer some great experiences and I think for at least some missions, they will have great replayability.”

As it was mentioned in our previous coverage Nielsen emphasised that no content was saved for the DLC, but he was asked whether that was except guns and maps, to which he replied:

“Nope. Except for nothing.”