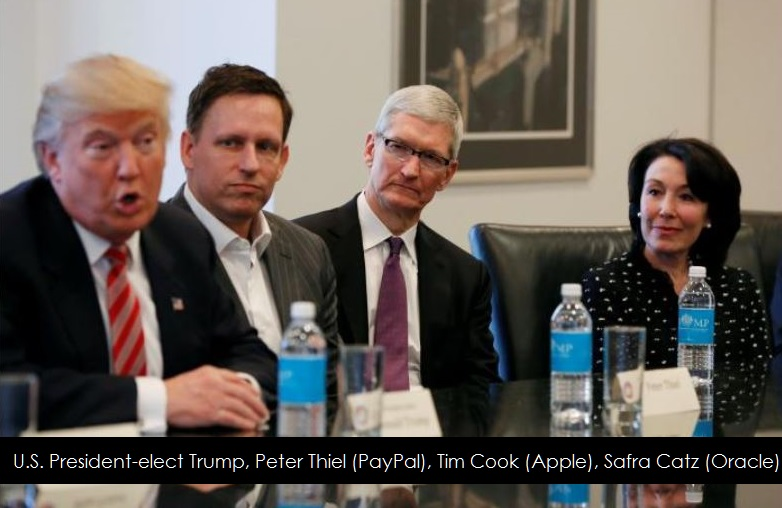 The tech industry is yet to embrace the country's President-elect Donald Trump with open arms. While some have talked about Silicon Valley taking a U-turn right after the election results, others are steadfastly fighting against any cooperation with the new administration.

We had reported earlier that Oracle CEO Safra Catz had joined the Trump transition team. Last week, President-elect Donald Trump met with the tech leaders at his Manhattan Tower. While Cook may have joined the meeting with a sober, "save-me-I'm-stuck-here" face, Catz was said to be the most outspokenly enthusiastic about the meeting.

"I plan to tell the president-elect that we are with him and will help in any way we can." Catz had said prior to the meeting. "If he can reform the tax code, reduce regulation and negotiate better trade deals, the U.S. technology industry will be stronger and more competitive than ever."

The company is getting push back from at least one employee after the co-CEO joined Trump's transition team. George Polisner, 57, has worked at Oracle since 1993 in product development, customer advocacy, program management, and most recently, cloud services. A senior executive, Polisner posted his resignation letter to LinkedIn after sending it to the company, expressing concerns over Trump's tax and environmental policies, his choice of cabinet, disrespecting "Gold Star military families, women and the disabled", and stoking "fear, hatred and violence" toward minorities, among other things.

“I am not with President-elect Trump and I am not here to help him in any way. In fact - when his policies border on the unconstitutional, the criminal and the morally unjust - I am here to oppose him in every possible and legal way.

Therefore I must resign from this once great company.”

Polisner says he would not have resigned if Catz had taken a leave of absence from Oracle to pursue this new role with the Trump administration as a private citizen. "I would have been disappointed in her personally, but I would have respected her decision," he said. He also posted a petition protesting Oracle's work with the incoming administration - the petition has 100 signatures as of this writing.

A veteran of enterprise tech, Polisner believes in having dialogue with the Trump administration (which sounds more in line with Cook's strategy), however, he is concerned that Donald Trump could use technology as a tool to concentrate wealth and power, and hurt vulnerable parts of society.

Polisner is not alone in his fight against technology companies becoming a part of the new government. After IBM CEO Ginni Rometty wrote an open letter to the incoming president, saying that the company would be happy to work with Trump on key issues, several employees signed an online petition protesting the letter.

In the petition, IBM employees demanded Rometty to "respect our right to refuse participation in any U.S. contracts that violate constitutional and civil liberties." Staffers also wanted the company to "prohibit perceived influence-peddling of elected officials" by restricting employees from using any Trump-branded properties for business purposes. Rometty is part of Trump's economic advisory committee, and she also received an open resignation letter from at least one of IBM's employees.

It is interesting to note that out of a number of tech leaders who have joined or welcomed Trump - including Musk and Kalanick - only the women CEOs have faced the major outburst of their employees. It is possibly because Trump has had - what has come to be known as - a "woman problem", repeatedly offending many and describing women as "dogs" and "fat pigs".

"As a female CEO at a Fortune 500 company, you are in a painfully small club. There is no doubt that you have faced many obstacles to get to where you are now, including from men like president-elect Trump," Elizabeth Holli Wood, who quit IBM, wrote to her chief. "Why not be clear that his words and actions are unacceptable?"

Whether it's only a start and if we would see other companies receiving similar resignation letters is yet to be seen.

Earlier this week, Tim Cook's response to his team also confirmed concerns at the Cupertino HQ following his meeting with the President-elect. Cook, however, handled those concerns rather beautifully, focusing on having a dialogue, stealthily mentioning China and South America, and insisting that the company still stands up for what it believes in.

"In my mind the table has already been set," Polisner wrote of the upcoming administration. "And they are not going to listen to a tech person who says ‘this may not work out so well’ because they’ve already calculated the impact to the balance sheet."