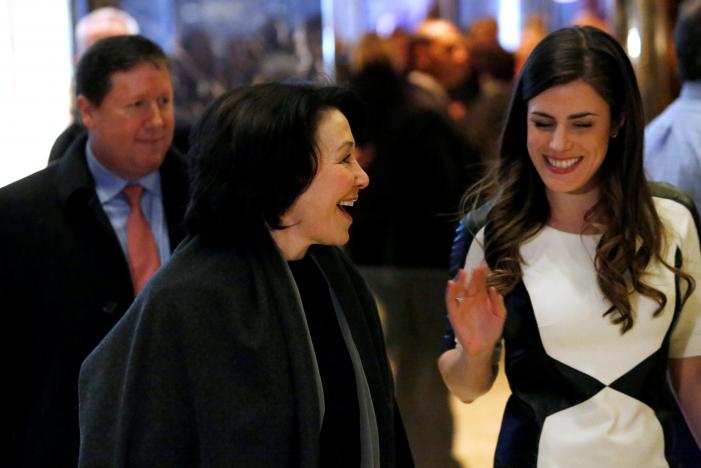 Oracle Corp's chief executive Safra Catz will join the executive committee of President-elect Donald Trump's transition team. She will remain at the company in the process, Oracle spokesperson Deborah Hellinger said on Thursday.

Catz was one of several top tech leaders who attended a meeting with President-elect (along with his children and advisors) yesterday. Before heading to the 25th floor of Trump Tower in Manhattan, Catz appeared to be the most hopeful attendee of the lot as she said the industry would be better off if Trump negotiated better trade deals and reduced regulation. "I plan to tell the President-elect that we are with him and are here to help in any way we can," she had said.

"I'm actually privileged and honored to even be here, and we are looking forward to helping you, and your administration," Catz said at the beginning of the meeting. Oracle chief was hopeful that the President-elect would reform the tax code and negotiate deals that could benefit the tech industry.

While the news about Tesla's Elon Musk and Uber's Travis Kalanick being on board (Strategic and Policy Forum) came as a shock to many, Catz hiring isn't really surprising. Unlike many other attendees of yesterday's tech summit Catz wasn't outspoken in favor of any candidate during the election campaign. On the Trump's side, he too never hit the company like he attacked Tim Cook's Apple and Jeff Bezos' Amazon.

According to Federal Election Commission data, Catz hasn't ever contributed to the presidential campaigns, unlike other tech moguls. She has, however, donated $57,640 to Republican and Democratic Congressional campaigns. Oracle's chairman, Larry Ellison, is a major Republican supporter who contributed millions to Marco Rubio’s failed presidential bid.

Catz will remain in her position as CEO of Oracle while working on the transition team with Trump. The company didn't share any further details of the nature of her role on the team.

Relevant: "Everybody in This Room Has to Like Me - At Least a Little Bit," President-Elect Tells Tech Leaders Representing $3 Trillion