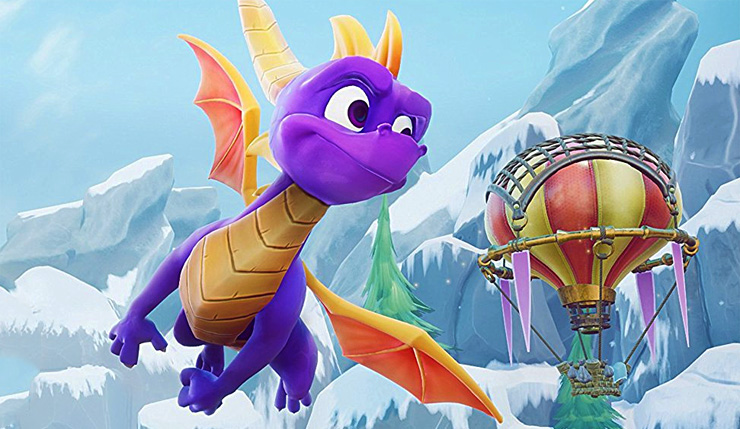 Last week, the makers of Spyro Reignited Trilogy showed a remastered level from Spyro 2: Ripto’s Rage for the first time, and now they’ve teamed up with IGN to showcase more Spyro 2 goodness. This time we get a look at the remastered version of “Colossus,” which tasks Spyro with tracking a yeti through a once-peaceful monastery. Along the way, our purple hero has to deal with angry mountain goats, yaks, and other obstacles. Check out the action, below.

Looks great, just like the rest of Spyro Reignited Trilogy! For those who haven’t been keeping up, here’s what’s included in the package:

Spyro Reignited Trilogy introduces players to a fully remastered game collection of the three original Spyro games that started the phenomenon — Spyro the Dragon, Spyro 2: Ripto’s Rage and Spyro: Year of the Dragon. The Spyro Reignited Trilogy features the fun and nostalgic gameplay that fans remember with more than 100 levels, enhanced reward sequences, Spyro’s gang of zany dragons and other goofballs, and more. The trilogy also includes improved environments, updated controls, brand-new lighting and recreated cinematics for added flavor in this one-of-a-kind adventure.

“I’m calling it – Spyro Reignited Trilogy looks to be shaping up to be even better than Crash N.Sane Trilogy. Of course, some of that can be chalked up to the source material being superior. Okay, okay, that’s subjective, but there’s no denying that classic Spyro is a bit more open, more modern-feeling, than Crash. Those who found N. Sane Trilogy a bit too punishing should feel more at home here. Spyro Reignited Trilogy delivers plenty of warm, toasty nostalgia, but it isn’t just for old-school fans. Anybody looking for a light, fun, accessible, and absolutely gorgeous platformer should be fired up about this one.”

Spyro Reignited Trilogy glides onto Xbox One and PS4 on September 21.