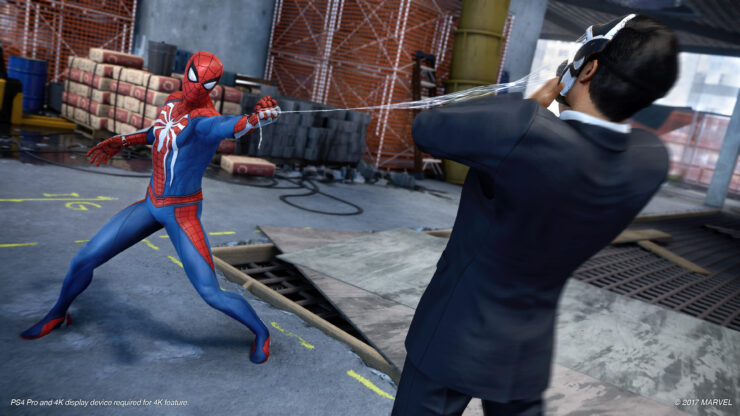 After last year's cinematic trailer, Spider-Man by Insomniac got a full-fledged gameplay reveal at E3 2017. Some fans worried that gameplay seemed a little too scripted and filled with Quick Time Events (QTEs), but Community Manager James Stevenson was quick to assuage those fears on Neogaf while adding that the swinging system is fully physics based and free roaming through New York is available.

You do manually swing through the city to chase it down though. And the swinging is all physics based with webs that attach to buildings 🙂

You can free roam in the city and webs attach to stuff.

That isn't a QTE, he is web zipping to the sign right as it explodes which triggers that special animation/camera. The player doesn't have to hit that at all.

For instance, if the water tower doesn't explode he would've zipped to the top of it, but since it did it changed the animation so he lands and vaults off.

One user posted a GIF of Spider-Man moving through a building and Stevenson confirmed that despite the absence of a HUD, that is also player controlled.

On Twitter, he subsequently added that Insomniac will play a demo of the game on the E3 show floor featuring longer combat sequences. Moreover, he hinted that there are multiple ways to catch the helicopter in that chase sequence since every Insomniac developer playing the demo traverses the city in a different way.

We will be playing the demo LIVE on the show floor all week. It's actually a bit longer with more combat.

Plus our demoers all have their own ways of traversing the city, they can catch the helicopter really fast hah. Gotta hold back 🙂

Insomniac also said via their official Twitter account that Spider-Man's unusual white spider emblem has a specific purpose which will be fully explained in the game.

It's explained in the game and has a purpose

Insomniac's Spider-Man currently has a generic 2018 release date, though it's probably not coming in the earlier part of the year (God of War was explicitly tagged for early 2018, for instance). It will be only available on Sony's PlayStation 4.