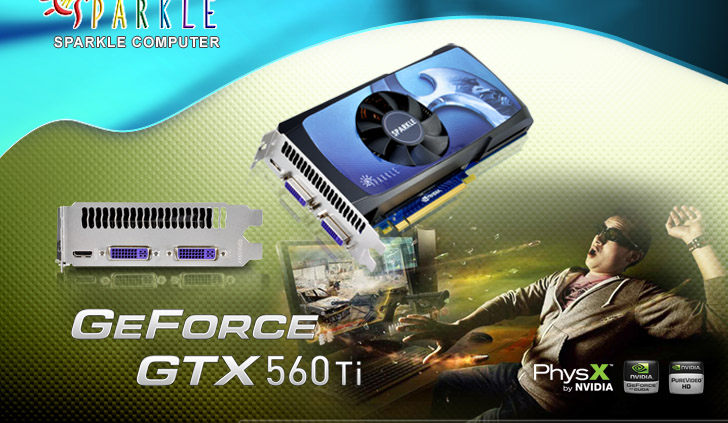 Sparkle has released two variants of the recently released Geforce GTX 560 Ti Graphics Card. One is the Sparkle GTX 560 Ti which features the reference design and sticks with the reference clocks 822/4000 mhz of the core and memory respectively. The card is set towards the Mainstream market and adopts the Fermi 2.0 architecture which is a refined version of the Fermi 1.0 featuring upgrades to core algorithms such as texture filtering and Z-Axis comprssion, The cards also provides a better Price/Performace and Performance/Watt Ratio over the previous gen GTX 460 card while being based on the same 40Nm Process. 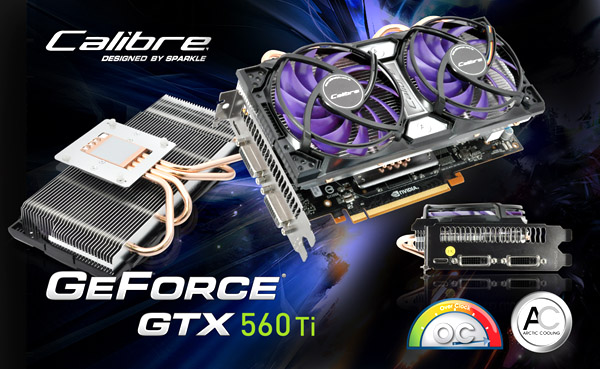 The other variant by Sparkle is its Calibre Edition X560 which is a factory Oc'ed Variant and uses Arctic Cooling to cool the GPU. Featuring a tremendous OC of 1000Mhz on the core is just impressive while shaders run at 2000mhz and the 1GB GDDR5 memory runs at 4800mhz. Not only this but the Arctic Accelero Cooler can provide even more headroom for overclocking while ensuring that it keeps the card cool. Featuring a large aluminium block cooling the VRM/ Memory and Core and equipped 4 copper heatpipes for Heat dissipation which are cooled by two 92mm Purple colored PWM fans, This card is an overclockers dream.

Calibre X560 comes with a high working clocks and GPU works at an impressive 1000MHz.

The card will be out soon with the reference version already out, Both cards are backed by a three year warranty. Expect the price of Calibre to be a little over the reference one.

ARCTIC Launches The Liquid Freezer 2 – An AIO With Everything Covered