The Sony Xperia lineup has been facing some tough times recently, with the Japanese company witnessing a decline in smartphone popularity and sales over the past year. Not only has the Xperia Z3 lineup become redundant as of now, but the manufacturer's launch of the Xperia Z4 earlier this year didn't go well either, with devices starting to heat up due to Qualcomm's Snapdragon 810. But Sony decided to give the processor another shot recently and launched three Xperia Z5 devices, the Xperia Z5 Compact, the Xperia Z5 and the Xperia Z5 premium, which also became the world's first smartphone to come with 4K on board.

The Snapdragon 810 from Qualcomm has seen some tough times over the course of this year. The processor from the US chipmaking giant failed to deliver in several aspects, the most important and well publicized of which was its overheating issues. We saw several manufacturers, including the likes of Sony and HTC suffer from them, with the Taiwanese company facing some very difficult times on the HTC One M9 as a result of this.

But Sony's Xperia Z5 launch, just like others before it claimed to have solved the overheating problem, and courtesy of some benchmarks that have surfaced today, we see that the Snapdragon 810 does seem to be finally performing to its full potential today. As can be seen in the image below, the Sony Xperia Z5 manages to score an impressive 59430 points in performance benchmarks, which aren't low by any means. 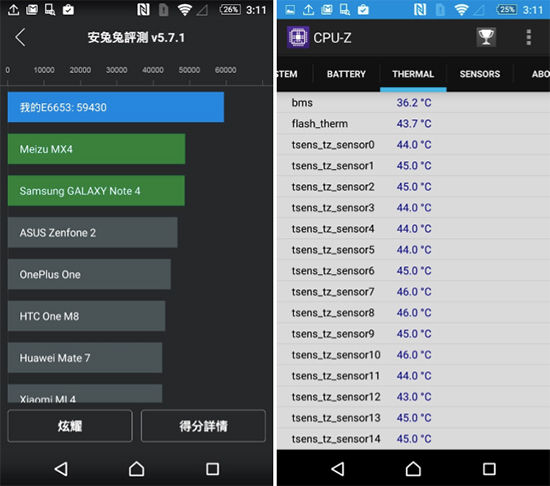 What's more impressive however are the temperatures the device is shown to be running on at the time of the benchmark. As you can see above, the Xperia Z5 manages to stay below 50C for all aspects of hardware performance, which are a breath of fresh air when it come to the Snapdragon 810. Sony's known for its engineering prowess after all and looks like the company's dual heat pipe cooling solution for the Xperia Z5 lineup has paid off after all.

The Sony Xperia Z5 comes with Qualcomm's Snapdragon 810 on board, comes with a 23MP rear camera, 3GB of RAM and a 5.5 inch screen size. The device also follows Sony's minimalist smartphone design and is also dust and water resistant, as per Sony tradition. With today's benchmarks, we'd expect the Xperia Z5 to really be Qualcomm's last redemption for the Snapdragon 810 and if the device really does manage to obtain similar benchmarks in the future, then it'd be quite a nice offering indeed. Thoughts? Let us know what you think in the comments section below and stay tuned for the latest.