Sony Ends Up Last in E3 2017 Social Media Buzz, But It Probably Has Nothing To Worry About

We've just received the final analysis of E3 2017 on social media from Synthesio, the social intelligence platform, and one thing is clear - Sony consistently ranked in the last spots in all categories. That may be because they didn't really provide any major announcements with the exception of the Shadow of the Colossus remake for PlayStation 4.

When it comes to overall online mentions, Microsoft won with 25.53% mentions, quickly followed by Nintendo and Electronic Arts. Sony is only third to last among major publishers, narrowly beating Bethesda.

Synthesio's Social Reputation Score is also interesting as it "factors volume and sentiment of mentions to give a holistic picture of the overall feeling toward a brand as expressed online". In that chart, strange as it may sound, Electronic Arts handily got the top spot while once again Sony came up third to last, only above Activision and Take - Two, not to mention well below its main competitors, Nintendo and Microsoft.

Does that mean Sony is in trouble in any way? We asked Greg Roth, VP of Global Marketing at Synthesio, and he doesn't really believe that.

Xbox overshadowed PS4 in Share of Voice as a result of their new 4K-enhanced Xbox One X - which makes games look nearly lifelike.  So, if E3 is all about who creates the most buzz, then the Xbox clearly won. But, I've looked at the qualitative data - and it's clear to me that this buzz for Xbox might not be sustainable - as most of the chatter is driven by overly-passionate gamers that are willing to make the extra investment for the ultimate experience.  However, in the long run, the high price for the Xbox One X might hinder its ability to close the sales gap between Xbox and PlayStation 4. Time will tell if this buzz is sustainable or not, and if it's not, then I'm not sure Sony should be as nervous as is being suggested now.

When it comes to games, DICE's Star Wars: Battlefront II was the most popular game followed by Bioware's Anthem, both of them powered by gorgeous Frostbite graphics which certainly didn't hurt in keeping the online conversations going.

For all the single categories and charts, scroll down below. Do tell us in the comments whether you agree with this data analysis from social media from your own perspective of E3 2017.

Top Buzz Drivers:
Microsoft's announcement and introduction of the new Xbox One X created the biggest stir online that was impossible to top. The buzz around the new system propelled Microsoft into the number one spot for the show with 25.33% of online mentions around E3, just edging out the excitement around Nintendo's big announcements (24.11%). Here are the top 5 most discussed video game companies:
- Microsoft (25.33% of all online mentions)
- Nintendo (24.11%)
- EA (20.20%)
- Activision (10.83%)
- Ubisoft (7.31%)

Most Positive Posts
Knowing who is driving the most buzz is important, but the picture isn't complete without taking into account more social data, including the overall volume of mentions, the sentiment of the mentions and the influence behind those mentions. These combine to form Synthesio's Social Reputation Score (SRS), which takes that complete picture and produces a score of 0-100 for every brand, product, etc. that you are tracking. According to Synthesio's Social Reputation Score, here are the top 5 SRS leaders from E3 2017: 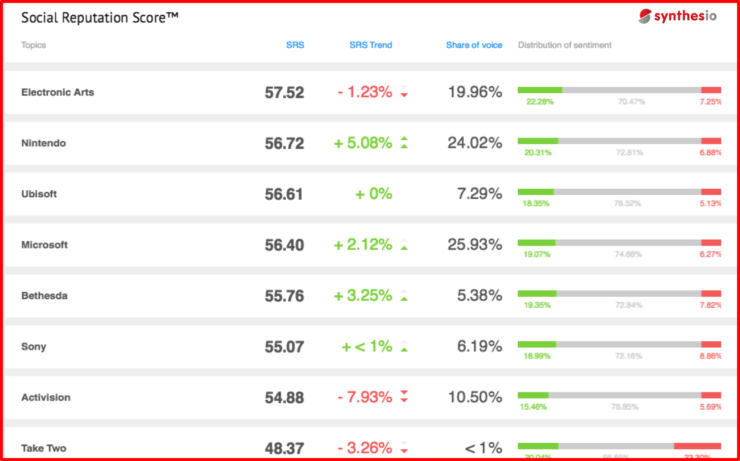 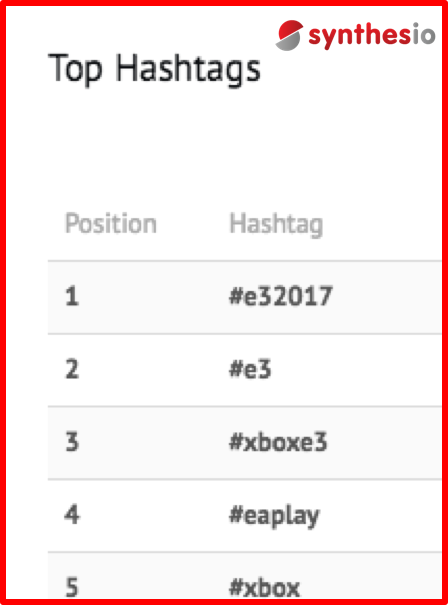