LG announced the LG G4 two days back and the device confirmed a strong rumor going around. Confirming previous speculation, the company did indeed launch its flagship device with the Snapdragon 808, rather than going with Qualcomm's top tier Snapdragon 810, as had been the tradition before. With the launch of the G4, the Snapdragon 808 became the center of attention, with users wondering whether it would be able to deliver the performance levels expected of an Android flagship. 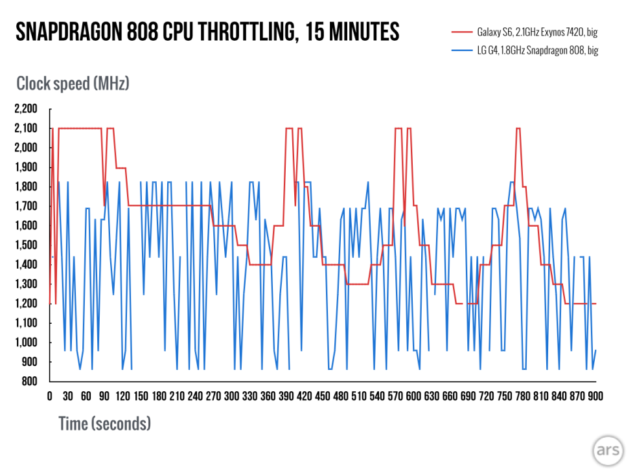 The Snapdragon 810 packs a powerful punch when it comes to performance. If you're looking for top specifications, its one of the few processors on the market that will end up impressing you. But processor performance in mobile devices is barely based on specifications alone, and today's benchmarks further prove that point. And in the 810's case, its not a matter of how fast it can go, but rather of how long can it last. Some early tests have been carried out by folks over at ArsTechnica on the 810's younger sibling, the Snapdragon 808, and end up showing how it performs in areas other than top frequency achieved. 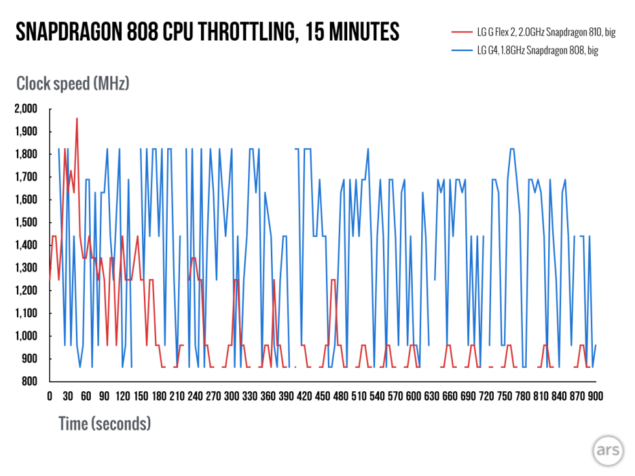 Taking a look at the charts above, its evident where the true strength of the Snapdragon 808 lies. While the Snapdragon 810 does end up achieving significantly higher clock speeds when compared to the 808, tests find that the CPU finds it much difficult to retain these speeds, suffering from overall throttling problems. The 808 however, manages to consistently fit its 1.8 GHz frequency. For the end user, this means more sustained performance when running intensive tasks, as this means you won't have to worry about your device performance being affected by overheating. In fact, the stark difference between LG's G Flex 2 and the G4 is clearly evident and even though Samsung's Exynos for the Galaxy S6 does fare much better, the LG G4 option should suit those who don't require the extra performance punch Samsung's offering delivers. 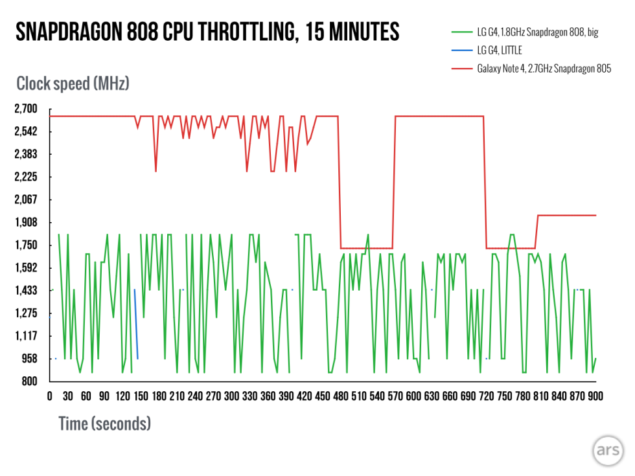 Tests on GeekBench 3 for single and multi core show the Snadpragon 810's capabilities of generating a high score. But as soon as the processor is nice and toasty, scores drop and end up being the lowest in the three processors being tested, namely Samsung's 14nm Exynos 7420, the Snapdragon 808 and of course, the Snapdragon 810. So when picking up your flagship upgrade for this year, if you're looking for performance that lasts, be sure to give the LG G4 and the Snapdragon 808 a look. But if you're looking for heavy duty performance, there really is nothing out there that matches Samsung Exynos 7420. And while these stats do give a good idea of what to expect, device choice after all is a matter of performance preference. So stay tuned and let us know what you think in the comments section.

Which One Takes The Crown? Exynos 7420, A8 And Snapdragon 810 Benchmarked And Compared