The Exynos 7420 found on Samsung's Galaxy S6 Duo is the first mobile SoC to come with 14nm FinFET architecture. This, coupled with its impressive cores has allowed Samsung's in-house SoC to become one of the most top performing chipsets out there. So one would naturally expect the Galaxy S6 to outperform other devices when it comes to operational performance. Benchmarks generally give us a fair idea of what performance to expect from a device, and that's exactly what we have in store for you today.

Folks over at Tom's Guide have done a benchmarks analysis of Samsung's top tier flagship, and compared it to current flagships including the LG G4, HTC One M9 and Apple's iPhone 6. ASUS' Zenfone 2 also gets a mention, given the fact that it possesses Intel's Quad Core Atom Z3580. So which device comes out on top? Lets find out below. 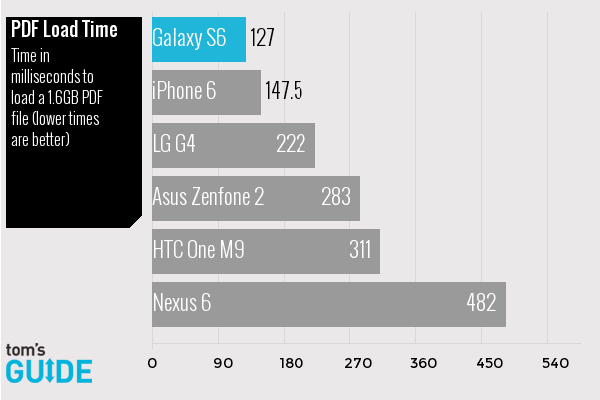 Starting from Load times, we see the Galaxy S6 take a commanding lead over the rest of the pack. The device manages to take a mere 127 seconds when it comes to loading a 1.6 GB PDF file, as reported in the benchmarks above. At the bottom of the list we see Google's Nexus 6, which nearly takes four times as long as the Galaxy S6 in load times. Just goes to show how much of a difference having a slightly older processor can make, as even the Snapdragon 808 touting LG G4 takes half of that time. Apple's iPhone 6 rests comfortably in second place, with a lag of 20.7 milliseconds. Whats even more interesting is that the Snapdragon 810 on the HTC One M9 comes in fifth place, going to show just how much of a difference theoretical and actual performance figures can take. 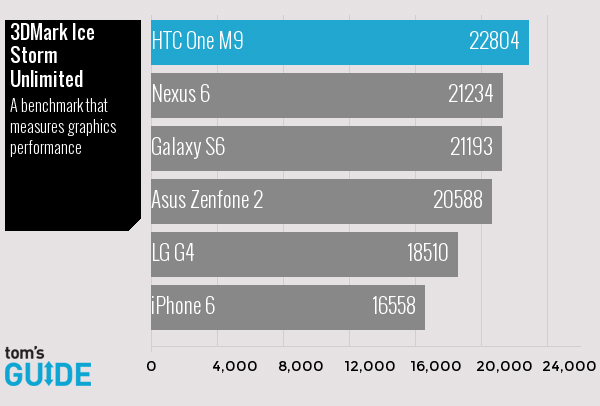 Even though the Snapdragon 810 on the HTC One M9 might have fared poorly when it comes to processing power and performance, that doesn't mean Qualcomm's completely out of the game yet. Come to graphics performance and you'll see the Adreno 430 on the One M9 truly stand its ground. On 3DMark Ice Storm Unlimited, the One M9 takes a comfortable lead, and we see the Galaxy S6 come in third place.

Qualcomm really does know its GPUs, which is evidenced by the Nexus 6 coming in second place. The ZenFone's Power VR manages to gain it a place above the LG G4, while Apple's iPhone 6, suprisingly comes in last place. Perhaps Cupertino needs to focus more on graphics as well, and look towards dual camera lenses and what not later. 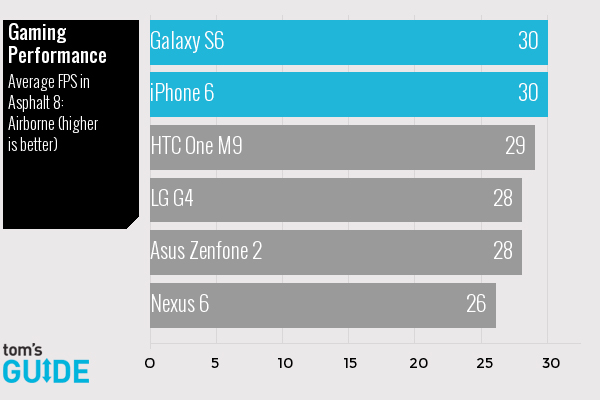 Moving towards gaming, both the Galaxy S6 and the iPhone 6 make strong comebacks with a tie for first position in Asphalt 8. Both the devices manage to run the game at 30 frames per second, which is only a second higher than the Adreno 430 on the HTC One M9. Keep in mind that Apple's iPhone 6 comes with only 1 GB of DDR3 RAM; its been a while since the iPhone series saw a RAM upgrade, and Apple's software-hardware optimization is clearly working in the company's favor over here. Both the One M9 and the Galaxy S6 come with 3 GB of DDR4 RAM, which undoubtedly works in their favor in a variety of benchmarks, as we have seen above and will see below. 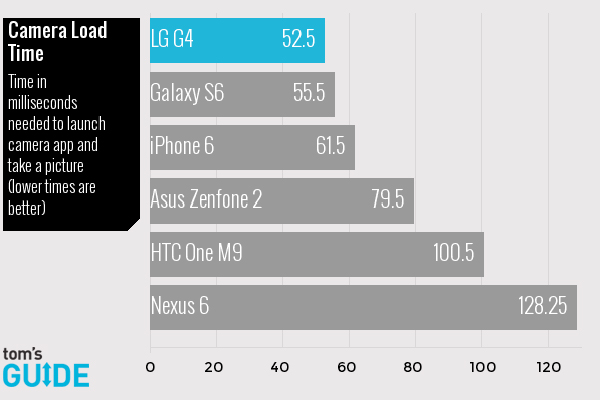 Another area where all six devices are compared is the time taken to load the camera app and snap a picture. After all, photography on our smartphones has become an integral part of their usage, with traditional point and shoot cameras neatly put out of business. Given LG's great focus on photography on the LG G4 this year, its no surprise that the flagship manages to outperform others even when it comes to basic load times for loading the camera app and taking a snapshot.

The Galaxy S6 is only 3 milliseconds shy in second place, with the iPhone 6 taking a full 9 milliseconds longer. When it comes to discerning this difference with the normal eye, you'd barely see it, but goes to show the impact even the slightest of hardware changes have on overall performance. The Nexus 6 takes the last place, unsurprisingly, with need shown of Apple requiring to perhaps finally increase RAM size on the iPhone. 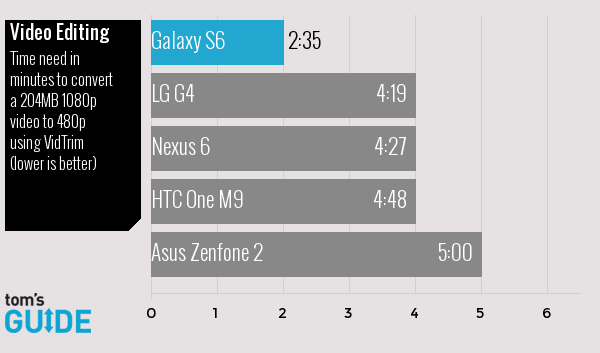 Coming towards video conversion times, we see the Galaxy S6 take a very strong lead over the rest of the pack. The Galaxy S6 takes only 2 and a half minutes to convert a 204 MB 1080p video to 480p, a conversion time that is nearly doubled for the Snapdragon 810 on the HTC One M9, even with its strong Adreno GPU on board. In second and third place we have the LG G4, and surprisingly, the Nexus 6. Google's stock Android and Motorola's manufacturing seem to push the device ahead of Intel's Atom based ZenFone 2, a device which managed to gain some attention at its launch as Intel's much needed jump into the mobile atmosphere. The company really needs some work on its offerings if it hopes to make a strong enough dent over here. 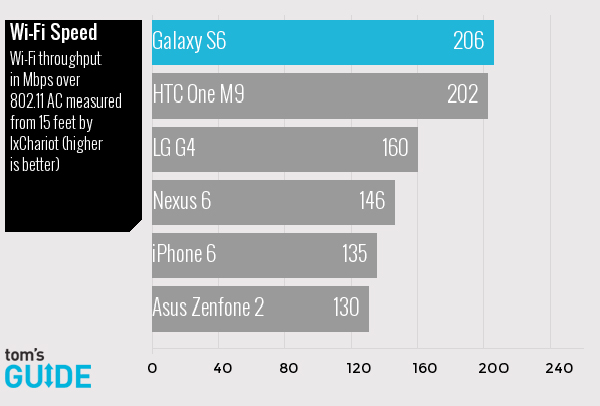 Coming towards Wi-Fi connectivity, we once again see Samsung's Galaxy S6 take the lead, but this time barely, over HTC's One M9. Both of these devices manage to dominate the LG G4 and the iPhone 6 by huge margins, though another surprise appearance is made by the Nexus 6, which manages to bag fourth place by a lead of 11 points. Go figure.

Now then, to our conclusion. Its really evident that Samsung's Galaxy S6 is one of the top devices to have this year. With promises of a drastic turnaround to shareholders last year, the Korean electronics giant has really managed to cover nearly every end on its 2015 flagship, and this is clearly shown by today's strong benchmarks performance. Qualcomm and HTC's fiasco with the Snapdragon 810 have manged to hurt both the companies and they should be busy thinking of ways to turn this around.

Don't count Qualcomm out by any means right now though, the company's Snapdragon 820 has seen some fiery rumors these days, with its custom Kyro cores expected by some quarters to hit frequencies of up to 3.0 GHz. The LG G4 also turns out to be a reasonably performing device, with the strength of its camera further solidified. And the iPhone once again reminds us of Apple's approach of devices as a complete set of design plus functionality. Thoughts? Let us know what you think in the comments section below and stay tuned for more.

Microsoft Should Release Windows 7 as Free Software to “Undo Past Wrongs,” FSF Says

AMD’s TressFX 4.1 Is Now Compatible With UE4, Ready for DX12/Vulkan