With the next big installment in Activision's renowned first-person shooter video game series releasing in a couple of months, there are a lot of discussions arising about whether the upcoming next-gen Call of Duty: Advanced Warfare will run at fully optimized 1080p resolution and 60 frames per second on the Xbox One console, or will the developer have to part with the native resolution in order to uphold smooth gameplay performance and frame rate. Sledgehammer Games is trying its best to equally optimize the game on both latest consoles but it looks like the developer is facing some development issues that are hindering the progress. 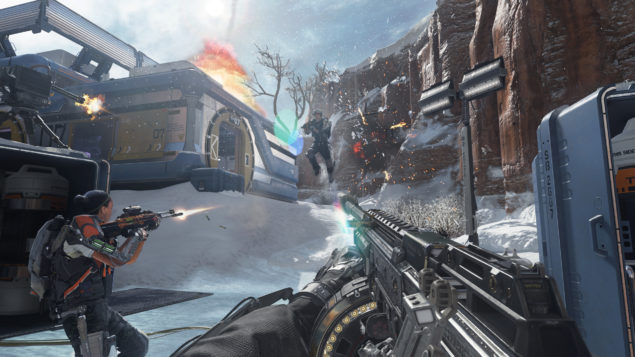 Call of Duty: Advanced Warfare is the next main title in Activision's all-time hit Call of Duty series, and it is among some of the most praised video games coming out later this year. It is the second video game title in the franchise that will be landing on the latest PlayStation 4 and Xbox One consoles, and unlike its predecessor, the game is being developed by two different studios, with Sledgehammer Games being in charge for the next-gen versions of the game.

Unlike last year's Call of Duty: Ghosts, which left Xbox One players at a slight disadvantage compared to PlayStation 4 players, almost every gamer expects the upcoming Call of Duty: Advanced Warfare to perform better and smooth on Microsoft's latest video game console. Recently, Sledgehammer Games confirmed what had been speculated; the upcoming title will run at a higher resolution than its predecessor on the Xbox One console. What the native resolution of the game exactly will be is anyone's guess, however, an early analysis of the game's footage shows that the native resolution is at least 900p.

While it is pretty much for sure that Call of Duty: Advanced Warfare will run at native 1080p resolution on the PlayStation 4 as same was the case with the previous game in the series, we can't say anything about the Xbox One version of the game. Speculations are that Sledgehammer is trying to hit full HD resolution mark on Microsoft's console as well, but according to Tidux, a well-known, reliable industry insider, the developer is facing some development issues in optimizing the game on the Xbox One, and Microsoft has jumped on board to help in taking it to the same level as the PlayStation 4 version.

#SG has problems with the dev of their #XboxOne version of CODAW. MS is on the case and help 2 try 2 get it at the same level as the #PS4

We are still more than a month away from witnessing Call of Duty: Advanced Warfare hit the local markets so there is enough time for Microsoft and Sledgehammer Games to make the game look and perform as close as possible to the PlayStation 4 version. Microsoft have also helped other major developers in past to equally optimize games for the Xbox One, such as Diablo III and Destiny.