Recently there was word around the internet about a mysterious Nvidia 'Mocha' Benchmark spotted on the GFXBench website. The benchmark has been removed of now but it boasted some impressive specifications. The 'Mocha' featured 2.1 Ghz quad-core CPU. This was the Nvidia Tegra K1 ARM Cortex-A15 processor with 192 CUDA cores. The operating system was Android 4.4.2 KitKat with a 7.9" 2048 x 1536 display. RAM on the device was 2GB, with 13 GB of storage and a 4.8MP front with a 7MP back facing camera. Other features included Wi-Fi, Bluetooth and GPS. Well, now according to the latest speculations, the 'Mocha' might as well be a new Shield Tablet. For complete details regarding 'Mocha', click here.

Potential Shield Tablet Will Combine Benefits of Tegra Note 7 and Shield Handheld Device. Range of Titles Covered Can Be Increased.

According to our friends over at fudzilla, there is confirmation that a new project is under work at Nvidia known as the Shield tablet. Presently Nvidia already has a Shield system. It consists of a video game controller attached to a 5 inch touch screen. It supports Gamestream which allows direct streaming of games from your PC as well as Android games. Nvidia's Tegra Note 7 on the other hand, is a $200 Tegra 4 based tablet, with support for a digital pen. The company does not sell the tablet directly. The Tegra Note 7 lacks 5GHz Wifi, something which is required for Gamestream support. Now according to speculation, the new Shield tablet under the works will address this problem. It will include 5Ghz Wi-fi, which will allow Gamestream support and thereby enable users to stream games directly to their tablets from their PCs, provided that they have a Kepler based desktop. 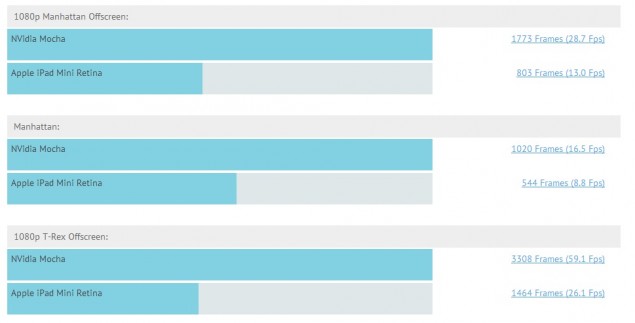 The 7.9 inch, 2048 x 1536 resolution on the 'Mocha' is similar to that offered by Apple on the Ipad mini as well. It should also be noted that in the GFXbench images, the Mocha outgunned the Ipad Mini by a large margin in a variety of runs. These include, as shown in the image above, the Manhattan and T-Rex 1080p offscreen and a standard Manhattan run. Furthermore, support for Gamestream will create a nice gaming tablet that many users would like. It will also address the problem of the Tegra Note 7 having a small screen. This increased screen size will probably cover 1080p resolution as well. This, coupled with the Tegra K1 might as well set the tablet out from competition. Recently, Xiaomi released their MiPad which was the first device powered by the Tegra K1 SOC. The Tegra K1 is built on a 28nm Hpm process. The dual core variant of the processor features 192 Kepler cores with a frequency of 2.5 Ghz. Launch of the Shield tablet will be able to provide us with a better firsthand experience of these processors, which do look quite good on paper. We can expect the Shield tablet to be a high speed tablet with a good resolution, lots of storage and strong wireless performance.