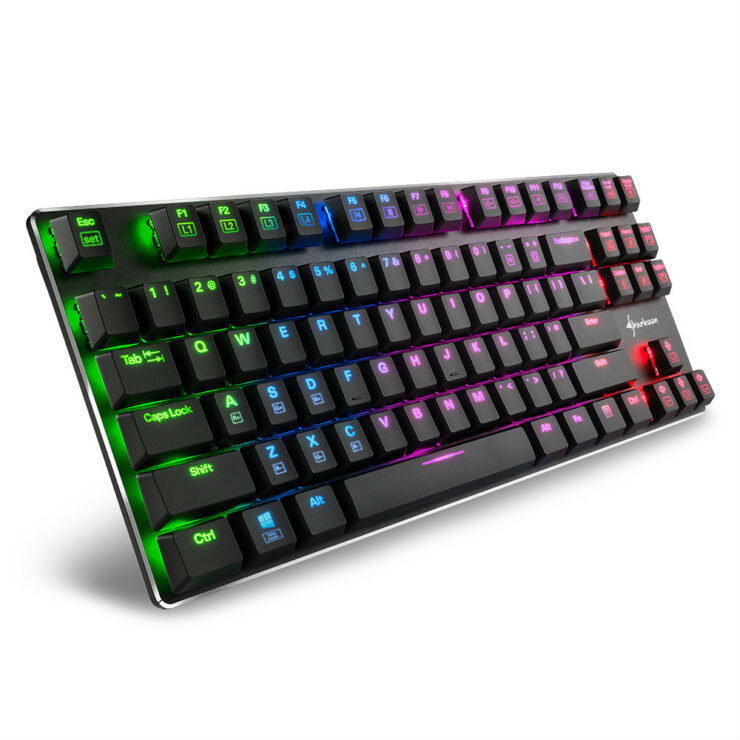 Sharkoon a company primarially known for their gaming peripherals, cases and chairs in Europe has released another in its line of low profile keyboards with the PureWriter TGB and PureWriter TKL RGB has introduced two versions with stepless RGB lighting for customizable illumination. Both versions include additional function keys for multimedia controls. Following from the previous PureWriter models without RGB, Sharkoon will be continuing to use mechanical switches from the Kailh. Both RGB Keyboards are available with either red or blue switches.

Sharkoon Gets Colorful With Their PureWriter Low Profile RGB Keyboards

With the Purewriter RGB and the Purewriter RGB TKL, Sharkoon has put its low-profile keyboards with stepless adjustable RGB illumination into a new light. Apart from preprogrammed lighting effects and preset lighting profiles, there is also a mode which offers an individualized choice of colors from the whole RGB spectrum. The chosen illumination can be programmed on-the-fly and saved in profiles. All settings are made directly on the keyboard and software is not needed.

The keyboard version with the number block has separate multimedia keys for volume control, or for launching the your favorite email program or any other program you set up. In addition, this and the TKL version both have function keys with preset multimedia actions, which, for example, can be used for controlling the media player.

The aluminium surface remains the same from the older, non RGB models as does the frameless compact design, measuring 436 mm in length (355 mm for the TKL version) and 127 mm in width. The keyboard also features n-key rollover, anti-ghosting keys, a polling rate of 1,000 Hz as well as a choice of mechanical switches, you can see the keyboards have not only been made for office use. The blue switches have an acoustic, tactile feedback with a detectable switching point; the red switches as always are preferred by most gamers as these have a linear characteristic and an undetectable switching and click point. Both keyboard versions have flat keycaps with a height of 6.2 mm and a lifecycle of at least 50 million key strokes.

No word on US or the rest of the world pricing.