With iOS 8.1.1 release, Pangu will not work for you if you want to jailbreak your device. It is the same reason why we advised you earlier to avoid updating to this latest OS build if you wanted to jailbreak your iOS device. However, folks at CoolStar have just released their popular tweak, SemiRestore now updated for iOS 8 - iOS 8.1. SemiRestore8 will help you restore your jailbroken devices to near stock condition without losing the precious jailbreak. 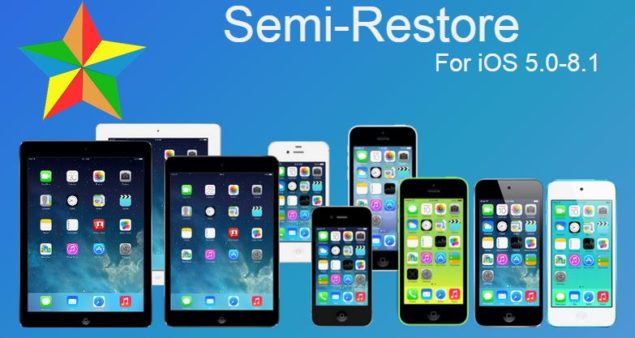 First developed and released for iOS 6.x, SemiRestore has remained a reliable tool specifically for those times when you get into a reboot loop issue thanks to some problematic tweak. SemiRestore ensures you can restore to the latest OS but saves your jailbreak which becomes essential when there's no JB solution available for latest builds.

We have already shared with you an easy tutorial that will help you to downgrade iOS 8.1.1 to iOS 8.1 to remain open to the possibility of jailbreaking your device. However that would stop working once Apple stops signing iOS 8.1 making the usual downgrading process void. SemiRestore8 needs OpenSSH which mean you first have to install OpenSSH on your iOS device. Please note to change the root password of your jailbroken device after installing OpenSSH to prevent others from remotely accessing your iOS device.

Here are some of the details of this tool; you can download it from the link shared at the end of the post.