A group of geologists from the Australian National University (ANU) and Royal Holloway University of London have finally put a stamp on the discovery of one of the massive faults on Earth found to date. This discovery might lead to an explanation of the formation of the Weber Deep, a 7.2 km deep (4.5 mile) abyss in the Pacific Ocean, located near the Maluku Islands in Indonesia.

This discovery was made beneath the Banda Sea, in Indonesia. This fault plane runs through the notorious Ring of Fire, a region believed to be a target of 90% of the world's earthquakes and active volcanoes. The Weber Deep has been there for centuries and its formation has always been a mystery to scientists.

The investigations into the largest exposed fault on Earth

The geologists analyzed the maps of the Banda Sea, and what they discovered was remarkable. These simulations suggested that a massive chunk of the Earth, as big as Belgium, had once been ripped apart by an immense crack, or a fault as it is technically defined. 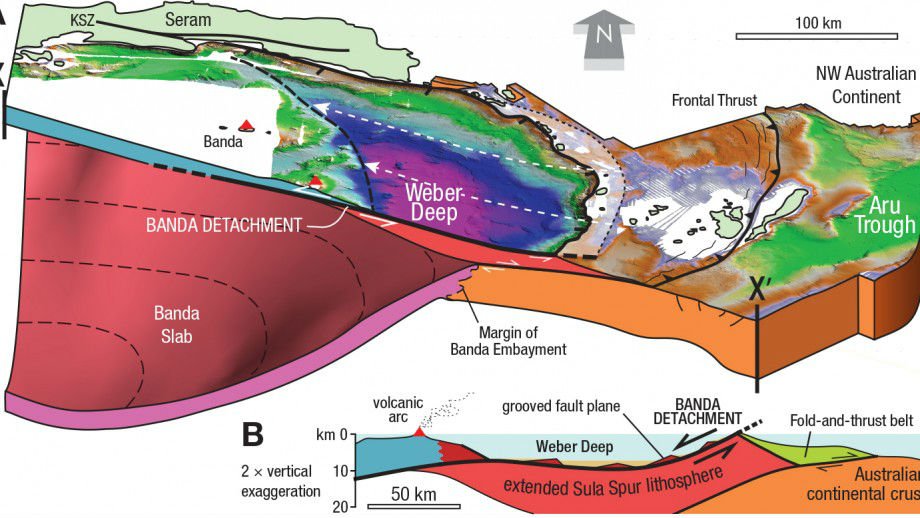 The Banda Detachment and the formation of the Weber Deep.

The simulations showed that this fault spread across an area of 60,000 kilometers (23,166 square miles). The name Banda Detachment was given to it based on the analysis of the bathymetry (underwater topography) and regional geology.

It is remarkable that this entire explanation was hypothesized and it did not exist for the researchers until they saw it with their own eyes. They sailed out to the east of the Pacific Ocean and discovered the land forms in the water, which were the products of this Banda Detachment fault plane.

How will this information help?

According to John Pownall, a member of the ANU research team, this discovery will help explain how one of the Earth's deepest sea areas became so deep.

"Our research found that a 7km-deep abyss beneath the Banda Sea off eastern Indonesia was formed by extension along what might be Earth's largest-identified exposed fault plane," Pownall said.

This information will also help geologists in predicting the movement of the tectonic plates in the Ring of Fire, and inform about proposed risks of earthquakes and other major hazards like tsunamis.

"In a region of extreme tsunami risk, knowledge of major faults such as the Banda Detachment, which could make big earthquakes when they slip, is fundamental to being able to properly assess tectonic hazards," Pownall added.