Sapphire Technology's upcoming Radeon R9 290X VAPOR-X which would go on to become the first consumer graphics card with 8 GB GDDR5 VRAM has been leaked by Videocardz. The memory has doubled over AMD's reference design which would result in better performance in high resolution gaming. 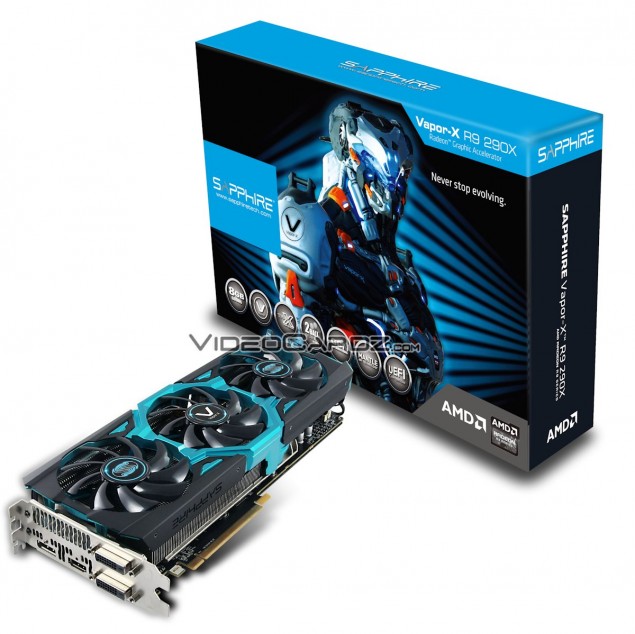 The Sapphire Radeon R9 290X VAPOR-X features the AMD Hawaii XT GPU sporting 2816 Stream processors, 176 TMUs, 64 Render back-ends and a 4 GB GDDR5 memory operating along a 512-bit bus interface. The core and memory frequencies were not mentioned but we are certain that the card would be clocked beyond the 1000 MHz mark for the core since the card is equipped with a non-reference PCB design which equates into greater stability and overclocking capabilities over the reference variant.

The Radeon R9 290X VAPOR-X is a leap over the Tri-X OC variant from Sapphire in terms of board power and cooling. The Tri-X OC comes with a reference design while the cooler is a beefy tri-fan dual slot heatsink with enough capability to cool the massive Hawaii chip. We are short of details regarding the PCB design at the moment but it would certainly be made of high quality components considering the premium price tag you *consumers will have to dish out for this product.

Sapphire has taken a step forward in cooling with their VAPOR-X variant which in addition to the better fan tri-fan cooler which cools a large aluminum fin heatsink beneath it and houses several heatpipes, the Radeon R9 290X VAPOR-X also features a massive backplate that helps cool down the memory chips and several heatshrinks do provide cooling to the MOSFETs beneath the PCB. The cooler is massive and may take three expansion slots space while installation so that would limit the use of four of these cards in CrossFireX unless you're using a high-end E-ATX form factor motherboard with PCI-E slots stacked in the proper arrangement. Display outputs include Dual-DVI, HDMI and a Display port slot, price for the Radeon R9 290X VAPOR-X is not confirmed yet but we can expect a huge premium over the $549 possibly going past the $799 mark. Launch is expected just around the corner as with other non-reference R9 290X products such as MSI's Radeon R9 290X Lightning.