MSI has showcased their latest Radeon R9 290X Lightning at the CES 2014 booth which features the flagship Tri-Frozr cooling and custom PCB design for unprecedented cooling and overclocking performance for PC enthusiasts and overclockers. 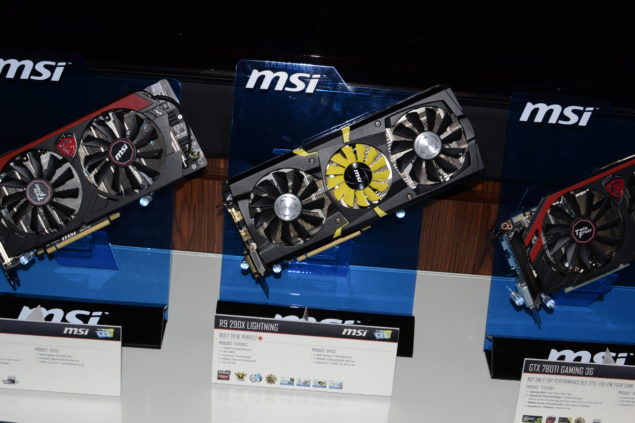 Images are courtesy of Anandtech!

The MSI Radeon R9 290X Lightning features the AMD Hawaii XT GPU sporting 2816 Stream processors, 176 TMUs, 64 Render back-ends and a 4 GB GDDR5 memory operating along a 512-bit bus interface. The core and memory frequencies were not mentioned but we are certain that the card would be clocked beyond the 1000 MHz mark for the core.

From previous leaked PCB shots, we know that the Radeon R9 290X Lightning is going to feature the most power-ful PCB ever produced for the Hawaii GPU with a 12+3+2 phase power design that would be powered through an 6-Pin and dual 8-Pin connectors. So that's alot of power being fed to the core and components which means LN2 overclockers have something of a treat headed to them.

The interesting part is that the fan in the middle dissipates heat off the PWM supply while the other two fans cool the GPU and Memory chips. The card is powered through Dual 8-Pin connectors while Display outputs include Dual DVI, HDMI and a display port. Pricing and launch date were not revealed but the card looks like it is the final retail model hence would possibly launch this month for a premium price over $599 US.

Following image is courtesy of Sweclockers!