Today's a special day as we gracefully welcome two new flagships from Nvidia and AMD. The GTX 990 Ti 24GB and the R9 395X2 16GB, both reviewed and benchmarked !

We've anticipated this launch for many months now and they're finally here. The fastest graphics cards to ever come out of Silicon Valley. Both featuring two massive GPU cores and elaborate cooling solutions to maintain safe operation under strict thermal limits once gamers open the taps and run the latest games at maximum settings.

So without any further delay let's get straight into the juicy bits !

First off we have the GTX 990 Ti, Nvidia's next dual GPU flagship. Featuring two full fledged GM200 GPUs with 3072 CUDA cores each for a total of 6144 CUDA cores. Twice that of the Titan X, featuring a 768bit wide bus or 2x384bit if you like and a whopping 24GB of 7Ghz GDDR5 VRAM, delivering 336GB/S of memory bandwidth per GPU.

Both GM200 GPUs operate at base clock of 1216Mhz and a boost clock of 1352Mhz. Making this is by far the highest clocked graphics card Nvidia has ever introduced and the most powerful as well. In fact it's more than twice as powerful as the Titan X, completely eclipsing it in performance. The best part in all of this is that this card is all yours only for smidgen under $2000. The official MSRP is an eye watering $1999. 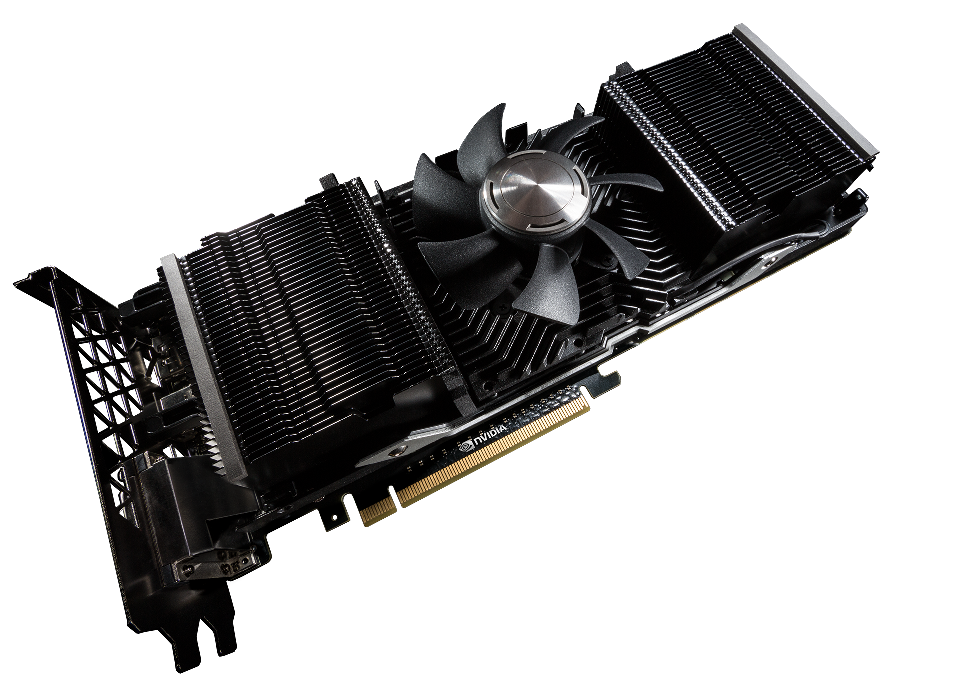 So let's discuss the cooling solution that Nvidia has decided to use. We're looking at two vapor chambers, each sitting on top of a GM200 GPU cooled by a 90mm central fan. The cooling solution you see above is how the card actually looks. Interestingly enough Nvidia decided that adding a metallic shroud similar to the Titan X or Titan Z would merely obstruct air flow elevating the thermal and acoustic footprints. According to Nvidia this new patented open air cooling design which Nvidia dubs ThermX™ is 23% more efficient and 13% quieter than traditional solutions.

This cooling solution also happens to be lighter so the card will exert less pressure on your motherboard and not exhibit any sag overtime. We like what Nvidia has done here, putting substance over style and functionality over aesthetics. Clearly targeting a more mature audience.

Moving on to the Red Team. This is the first time that we've ever got to see the R9 395X2. This is a dual GPU card just like the 990 Ti. Featuring two Fiji XT GPUs each rocking 4092 GCN cores for a total of 8184 GCN cores. Each GPU features a 4092bit wide IO memory interface feeding 8GB of stacked HBM1 for a total of 16GB of HBM running at 1.25Ghz. Resulting in a massive 640GB/s of bandwidth per GPU, twice that of the GTX 990 Ti. Each Fiji XT GPU is clocked at 1080Mhz which once again makes this the highest clocked graphics card ever produced by AMD. And easily the fastest, outperforming AMD's previous R9 290X by nearly 300%.

So let's take a quick look at the cooling solution AMD has chosen for the R9 395X2.

We can see that AMD has opted for a very similar cooling solution to the R9 295X2. Although the keen eyed among you will notice that the card is significantly shorter than its older sibling. That's mainly thanks to the stacked HBM memory which doesn't take any space on the PCB. In contrast, GDDR5 chips and the wiring necessary to connect them to the GPU occupy a significant portion of the PCB.

The card overall is also lighter than the previous R9 295X2 and the pump operates at a lower RPM thanks to the highly efficient Fiji XT GPU. In addition to a new technology AMD dubs FreeFlow™ which allows the cool air from the fan to travel along grooves inside the cooling shroud that work to tunnel air to cool the most thermally sensitive components. The result AMD says is more stable operation, 18% lower temperatures and 12% less noise. All of this is yours for another eye watering $1999.

So let's see how these cards perform running the latest and most demanding games at maximum settings and torturous resolutions.
Let's start off with the ever more popular Minesweeper. Running the game with all the settings maxed out at the popular resolution of 360x240 the R9 395X2 averages just over three thousand FPS while the GTX 990 Ti averages just below three thousand FPS. Both graphics cards produce a very playable and smooth overall experience.

Solitaire is slightly less demanding than Minesweeper. With all the settings cranked up to the max running at 360x240 the game looks absolutely gorgeous. The 395x2 averaged 3720 FPS while the 990 Ti averaged 3816 FPS.  Both graphics cards produce an equally lovely gaming experience.

Now let's look at how the cards perform when we present them with a real challenge. Cranking up the resolution to 32K or what's otherwise known as 640x360. Minesweeper becomes an extremely demanding game with both GPUs averaging below two thousand FPS. I'd barely call this playable, while the game looks beautiful at 32K it isn't as smooth as it was at 320x240. If you want to play at 32K we'd advise you to consider using two cards in a quad multi-GPU setup to attain the best possible gameplay experience.

Moving on to Solitaire at 32K, again the game is absolutely gorgeous at such a high resolution. You won't actually be able to tell the playing cards in the game apart from a real deck of cards, the visuals are that impressive!. Again this is an extreme case scenario as not many people will play at a resolution this high. Both graphics cards worked really hard to output a very cinematic 2.4 and 2.5 thousand FPS.

For our thermal and acoustic testing we used a Corsair C70 case with two intake fans and one exhaust fan. We tested both graphics cards using the most intensive test we have which is Solitaire at 32K.

Solitaire at 32K is really demanding as we've established above, leading both of our cards to heat up to above 30c. Obviously we're looking at an extreme scenario here. Not a whole lot of gamers will play Solitaire at 32K, nor will you experience temperatures as high as this while the GPU is idling. So I really wouldn't worry too much about it.

Moving on to the noise test, again inside the same C70 case. The same case without either GPU installed produces 21dB of noise.

Amazingly, both cards actually reduce the total noise output from the same system without the graphics cards installed. A testament to the active noise cancelling effect of Nvidia's ThermX™ and AMD's FreeFlow™ technologies.

The final conclusion is that it's pretty much a toss-up between both cards. Frankly you'll be happy with either of them. And if you have $1999 to spend on a graphics card I'd not waste time trying to pick between them, flip a coin and enjoy your new game munching monster.