See through trucks are not common but the concept was introduced back in 2009 by the Russian design house Art Lebedev, they gave it the name Transparentius concept. The basic aim was to improve road safety and there was little work to be done, just put a camera on the front side of large and relatively slow-moving trucks and connect the video to a display on the back side of the truck. This helped the drivers behind trucks know when the road was clear so that they could overtake the truck. That is almost the exact same idea Samsung is coming up with in a new prototype truck.

The Korean company is using its excess of outdoor displays to make a video wall consisting of 4 displays at the back-end of a truck, those displays capture video from a camera installed at the front end, showing the way when it is clear. Samsung is now working to get a regulatory approval for the launch of its ‘safety truck’ as they call it. The idea is off-putting for major transport companies as it won’t be economically practical since 4 big displays on the back of a truck won’t be bringing the transport companies any profit, and while putting a small camera might be inexpensive those displays will cost a lot considering they would go on every big truck the company has. 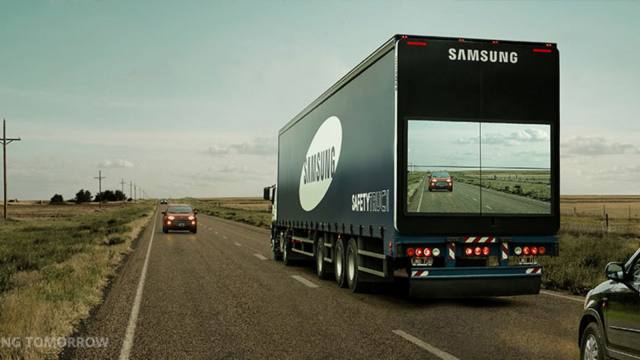 It is however remarkable that Samsung did manage to outdo the technical difficulties of this idea, such as solar glare. But this idea will still in my opinion remain an idea due to heavy investments which companies won’t be willing to make so a better idea would be to use Vehicle to Vehicle communication (V2V) systems, which are going to arrive in the US cars next year. This type of communication is one where your car transmits data about its position, speed and direction and receives the same information about other cars near yours. It can then transmit a signal that alerts other drivers about an unsafe driver or any collisions nearby so that drivers can react on time, this way the communication system does more than Samsung’s safety truck would. Although making big trucks ‘see through’ is kind of cooler than just V2V, but nevertheless road safety is what matters.